FUSION today announced it will premiere a new political sketch comedy series, “Happy Ending with Nando Vila,” on Thursday, February 8 at 9PM. The ten-part explainer series takes a step back and tries to figure out what’s going on behind the headlines, spotlighting the absurdity of the world in silly and absurd ways. 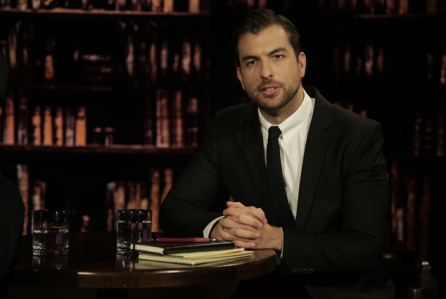 “America is looking for a happy ending to the mess we are in,” said Vila. “We are taking a fun, entertaining and informative look at the different building blocks of our political system, while proposing solutions in the hopes of making progress—because we’d like to end up, you know, happy.”

In the premiere episode “Killed by Capital,” Nando sets out on a film noir detective hunt to figure out what capitalism is, and how it controls our lives. Future episodes will tackle the gig economy, health care, housing, imperialism, and more.

Nando Vila has produced, hosted, and contributed to a range of programs for FUSION since the network’s launch. During the 2016 election cycle, he executive produced the Emmy-nominated documentary “The Naked Truth: Trumpland,” which profiled the people who fueled the Trump candidacy. He has served as a contributor to “The Feed” and “AMERICA with Jorge Ramos” as well as the network’s coverage of the 2014 midterms and 2016 presidential elections. In 2014, he produced and co-hosted FUSION’s “Midterm Mayhem,” alongside Kal Penn–an unprecedented live political coverage show for the network. Additionally, Nando produced and co-hosted “The Soccer Gods,” a weekly show for soccer fanatics, for two years including special coverage of the 2014 World Cup.

“Happy Ending with Nando Vila” is executive produced by Nando Vila along with Chris Kasick (“Uncle Nick” and “Attack of the Show”).

From going deep on cultural obsessions to telling impactful stories that inspire and connect us, FUSION is a network that serves up a unique blend of programming that reflects the passions and shared values of America’s diverse youth. The FUSION Creative Board is made up of a cross-section of marquee talent including award-winning actors, filmmakers, academics, and musicians who share the network’s commitment to seeking out the next generation of creative talent and emerging voices; Henry Louis Gates Jr. serves as the Chairman of the Creative Board. FUSION is available to audiences across a range of platforms including cable television (find out where to watch), FUSION.tv, and various OTT providers such as Apple TV, Roku, Amazon Fire TV, Chromecast, PlayStation Vue, among others. Follow the network on Facebook, Twitter, Instagram, and YouTube.

CHILEAN SINGER-SONGWRITER ANNOUNCES U.S. SPRING TOUR AND RELEASES HIS OWN VERSION OF THE ACCLAIMED ANTHEM "LAS FLORES" BY CAFÉ TACVBA