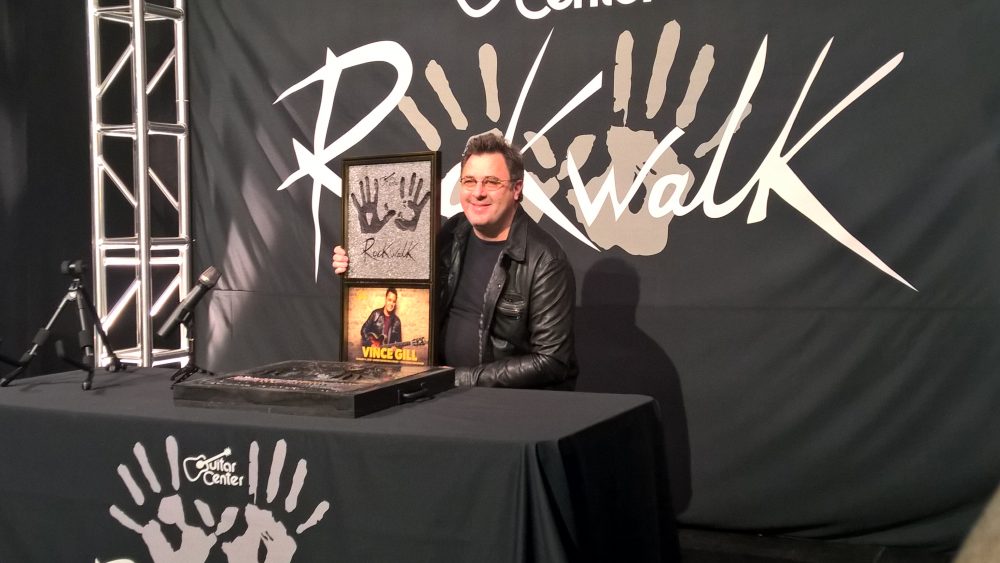 “Forty years into this, it’s still as much fun as it’s ever been to play music,” Vince Gill.

Gill was inducted by his friend and legendary Eagles guitarist Joe Walsh. During Walsh’s introduction he said Gill was the real thing, a national treasure, humble, brilliant, with a million dollar voice and a he couldn’t have asked for a better friend. Gill seemed genuinely humbled by the recognition, saying,” “It is an absolute honor to be chosen by my peers to be inducted into Guitar Center’s RockWalk. I’ve always been grateful to be able to spend my life doing what I love to do, and to be recognized in such a monumental way, cemented next to the legendary artists reflected on the RockWalk, is a moment I could never have imagined when I picked up that very first guitar.” 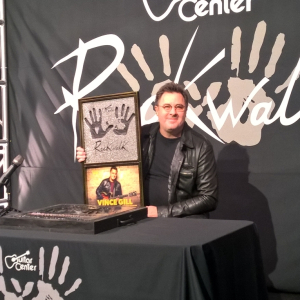 Guitar Center’s RockWalk honors those artists who have made a significant impact and lasting contribution to the growth and evolution of music. Guitar Center manager of music marketing and artist relations, Jake Cheung, said “Gill is a legend in the music world with 20 Grammys and countless other accolades, but he has also forged a meaningful career as a humanitarian, producer and collaborator,” Cheung said. “These, among other attributes, are what make Vince Gill the perfect example of the type of artist we intend to honor with Guitar Center’s RockWalk.

On February 12, Gill releases “Down to My Last Bad Habit,” his latest solo album and following his album release he will reunite with Lyle Lovett for a 13-city tour of acoustic shows.

Gill is also a spokesman for America’s Best Communities, a $10 million competition to revitalize small towns and rural communities.

“At the end of the day, what I get excited about is doing something I haven’t done before. When I record a song, I feel successful if I’ve accomplished something new.”- Vince Gill