The Good
The Bad

The Story of Walter and Margaret Keane as seen through the eyes of Tim Burton.

We have all been waiting for Tim Burton to move and inspire us again with his unique stylistic touches and inventive perspective on film making. His imaginative style has always produced wonderfully fantastical, bigger than life productions which include films like  Beetlejuice, Alice in Wonderland and Edward Scissohands.  Following a decade of critically disappointing films and directing choices, some critics have called Tim Burton’s Big Fish his last great piece of work, but critics may have to revise their opinions, with the release of Tim Burton’s upcoming biopic Big Eyes. For Mr. Burton’s second biopic, he moves away from his trademark style and teams up again with his Ed Wood screenwriters, Scott Alexander and Larry Karaszewski (The People vs. Larry Flint, Man on the Moon).

The film centers on the marriage, divorce and bitter battle of artist couple Walter and Margaret Keane, and their very public dispute over who would be credited with the creation of their internationally famous , kitschy paintings of waif-like children with ginormous eyes, during the 1950’s and early 60’s.

Big Eyes stars Academy Award winner Christoph Waltz (Inglourious Basterds, Django Unchained) as Walter Keane, the ambitious man with a talent for marketing and cheaply mass producing prints of the Keane’s Big Eyed waif paintings.   Acadmey Award Nominee , Amy Adams ( Junebug, Doubt,  The Fighter The Master, American Hustle) portrays Margaret, a divorced woman with a small child who is swept away by Walter’s bigger than life personality. Walter became a fixture on many talk shows during the 1950’s and internationally recognized as the artist behind the creation of those paintings likening himself to Rembrandt.  Margaret Keane would later challenge Walter over who was the true creator of the Big Eye paintings with claims that she created the paintings from their basement and Walter’s only real contribution was placing his own signature at the bottom.   A decade’s long battle between the couple would end in a paint –off with Margaret Keane winning millions in damages. Although Margaret won in court, Walter Keane never gave up his claims that he owned the rights to the Big Eye paintings. 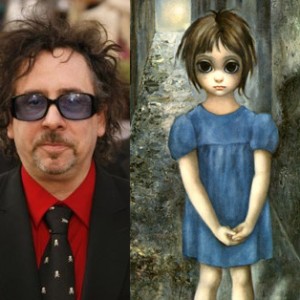 Burton, who has been a longtime fan and collector of Margaret Keene’s work,  once commissioned Margaret to paint a portrait of his former girlfriend and muse, Lisa Marie. (Ed Wood, Mars Attacks! ,Sleepy Hollow).  Margaret Keane’s influence can also be seen in several characters created by Burton for his films, including Sally from The Nightmare before Christmas and The Corpse Bride and Victor Van Dort from The Corpse Bride.

Unlike most of Tim Burton’s films, the cast of Big Eyes is made up of an eclectic group of actors he has never worked with before including Christoph Waltz, Amy Adams,  Terence Stamp, Danny Huston, Krysten Ritter, Jon Polito and Jason Shwartzman.

Early test screenings of Big Eyes have been positive for Tim Burton’s upcoming Christmas movie, where he has created a less fantastical film with comely restraint and a human character.

Big Eyes is slated for release this Christmas, December 25, 2014, by the Weinstein Company.