SundanceTV’s epic genre drama “Cleverman” returns Wednesday, June 28 at 10/9c. “Cleverman” is a compelling futuristic drama rooted in ancient Aboriginal mythology where humans and Hairypeople battle for survival in a world that seeks to silence and destroy them.

Koen awakens at the Kora tree, wearing a T-shirt riddled with bullets. He must find and bring together the people of the Zone (both Hairy and human), who have scattered and disappeared across the City after the demolishing of their home.

On the heels of a successful first season, which earned a prestigious Peabody Award nomination, the six-episode second season picks up with the destruction of the Zone and the Hairypeople hiding out of fear for their lives. Koen (Hunter Page-Lochard), the chosen Cleverman, sets out to harness his powers in the hope of bringing all cultures together. His half-brother Waruu (Rob Collins) shares the same vision, but his method is far more dubious. For Koen to realize his mission, he must defeat Waruu and the full force of the Government, both of which are united against him. With twisting plotlines and new characters including Jarli the Bindawu warrior (Clarence Ryan), the second season of “Cleverman” is action packed, bloody, and thought-provoking. The series is based on an original concept by Ryan Griffen. 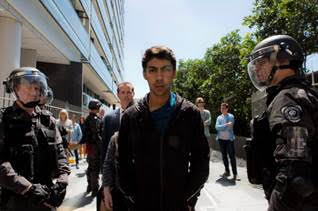