Grand Performances and The Alliance for Women Film Composers, in association with The Film Music Society and White Bear PR present

Music is an integral part of filmmaking, moving the story and touching the audience.

Where would iconic movies such as Star Wars, Avatar, The Godfather, or Gone with the Wind be without its music? Would Downton Abbey, Dexter, or House of Cards be the same and have audiences glued to their TVs without music? Would gamers immerse into Final Fantasy or Legend of Zelda if they were silent? Movie music has moved us all to cheer, cry, and fall in love for more than 100 years. Yet the vast majority of composers hired to create this vital part of Hollywood’s cultural landscape have been men. Well, that musical glass ceiling is about to crack!

Eight-time Academy Award nominated songwriter Diane Warren (“Because You Loved Me,” “How Do I Live”) will perform her 2016 Oscar, Grammy and Emmy nominated song “Til It Happens to You” from the documentary The Hunting Ground. Warren has also received 5 Golden Globe nominations, including one win, and 14 Grammy Award nominations, including one win. Also scheduled to appear are composer and vocalist Kathryn Bostic (Dear White People), violinist/vocalist/composer Lili Haydn (Anita), Grammy Award-winning R&B musician/producer/composer Raphael Saadiq and America’s Got Talent contestant, beatboxer/singer/pianist Butterscotch. More performers to be announced.

“We are honored to partner with Grand Performances to showcase the extraordinary work of female media composers,”

says Alliance of Women Film Composers President Laura Karpman. “This performance will shine a light on the tremendous music that is being made within our community.”

Grand Performances returns for its 30th season with an international and local lineup of music, dance, multimedia and spoken word artists that reflect the diversity and cultural depth of Los Angeles. Presented on a stage set into the water fountain on California Plaza, 350 S. Grand Avenue in the bustling downtown Los Angeles neighborhood of The Broad and MOCA museums and Grand Central Market. Audience members picnic, dance, or simply sit and enjoy the performances amongst the tall office and residential skyscrapers and the stars. Visit www.grandperformances.org for information on seating, parking, public transportation and more, All shows are free. 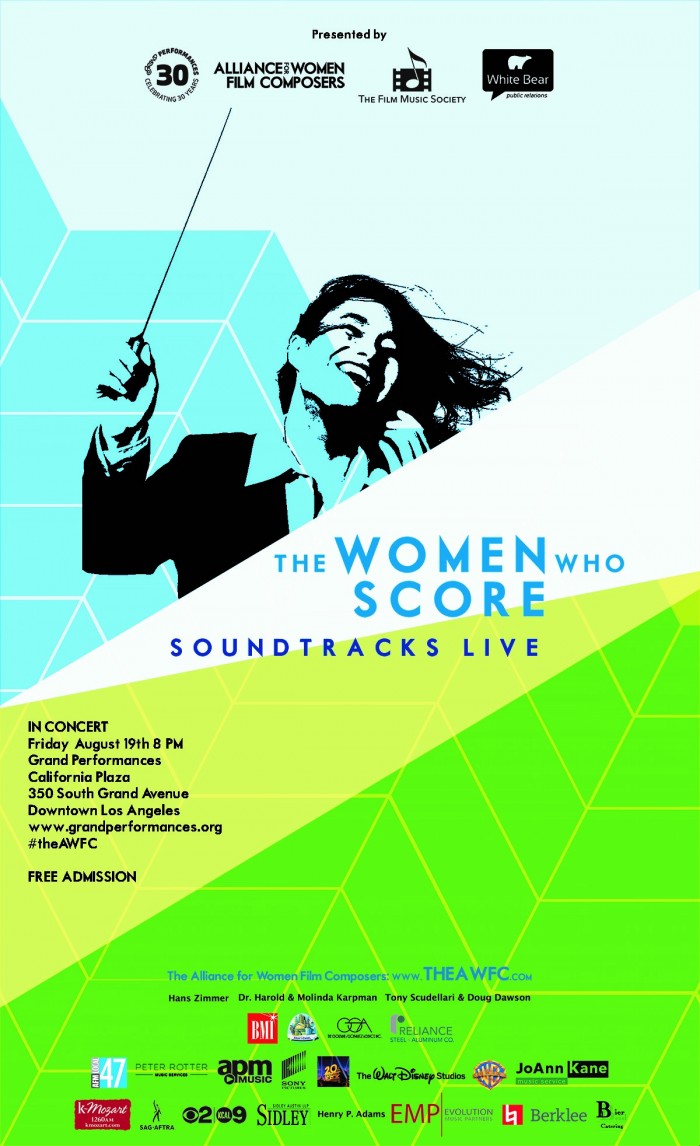 About The Alliance for Women Film Composers:

Hailed as the “Best Free Outdoor Summer Concert Series” by Los Angeles Magazine and called “a grand gift to the public” by the Los Angeles Times, Grand Performances celebrates its 30th anniversary season in 2016. The not-for-profit presents high-quality music, dance, theater, and more from around the world for free at California Plaza in the heart of downtown Los Angeles. Grand Performances has developed a loyal audience, and an industry reputation for presenting and curating the most globally eclectic and forward-thinking summer series on the West Coast.