On April 9th, Ralph Dudley’s SouLatino 11-piece big band detonated the stage at Spaghettini with some spicy, hot music.  It emphasized the lightning fast tempos and rhythms of Latin compositions, yet was still rich in the textures of the Soul genre.  What this unique mixture of sound exemplified was a new term called: SOULATINO. 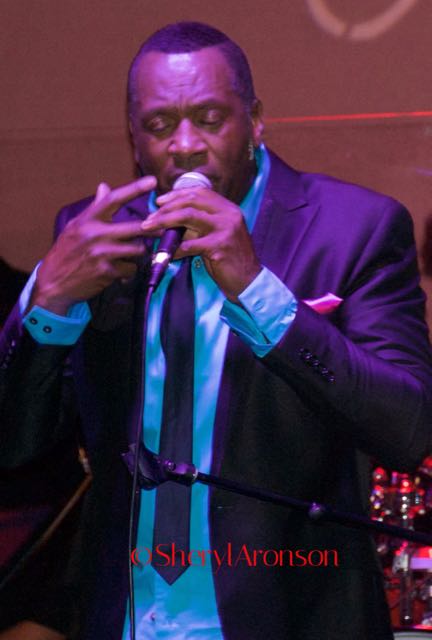 “SouLatino is blend of R&B, Rock, Latin, and Soul which blends into my concept, a perfect recipe to convey to my listening audience a very dynamic sound. I wanted to take the Latin music, embrace it and take the chance of making it my own… making it something very powerful, conveying it to people in order to bridge those different ethnicities.  And more importantly, when I sing in English, I am opening the door for my R&B listeners to be exposed to Latin music.” – Ralph Dudley (SouLatino) 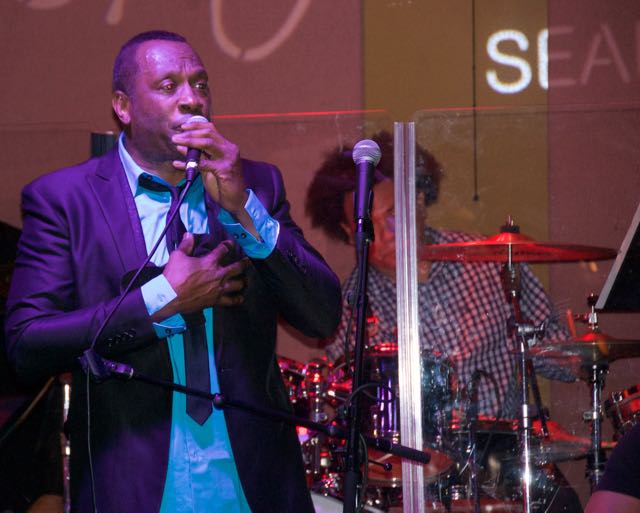 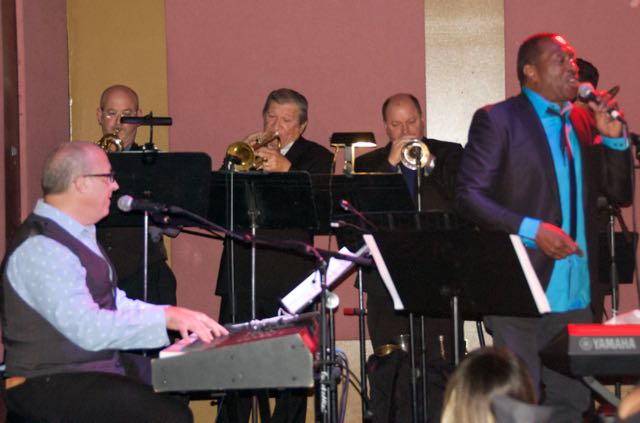 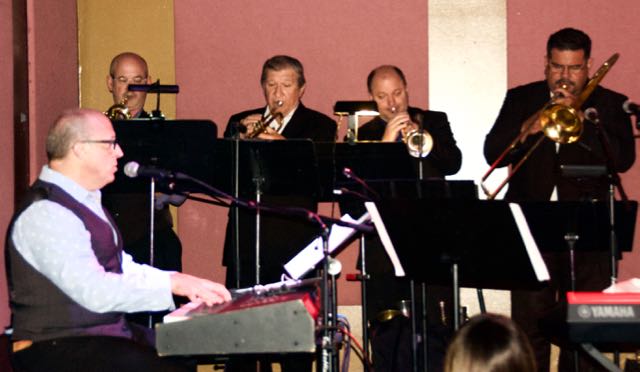 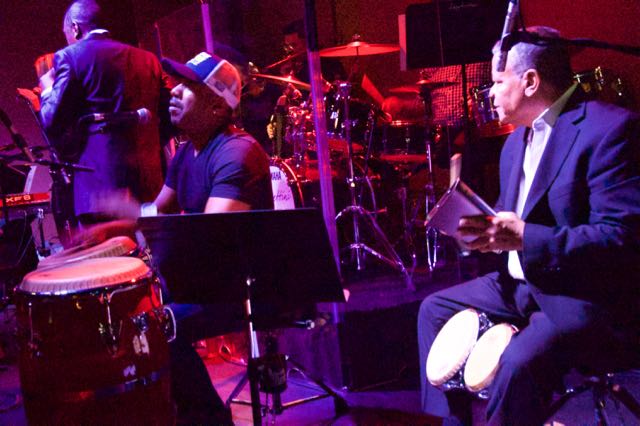 Kicking off the night, Ralph Dudley broke into “SouLatino” with his deep resonant voice, followed by the dynamic pulse of the band.  He sang about SouLatino as if the music was his muse, his lover, his heart and soul.  “SouLatino” is close to my heart because it began my writing for this genre of music.  It’s a R&B/Latin/ a bit of a Rap.  The music becomes…My Lady.  It’s my inspiration so I speak in those terms,” Ralph Dudley had previously commented in an interview.

Slipping into a Luther Vandross song next, the audience heard, “I Want You Back…” that captured the romantic spirit with a sweet, rhythmic beat that swung Latin style. 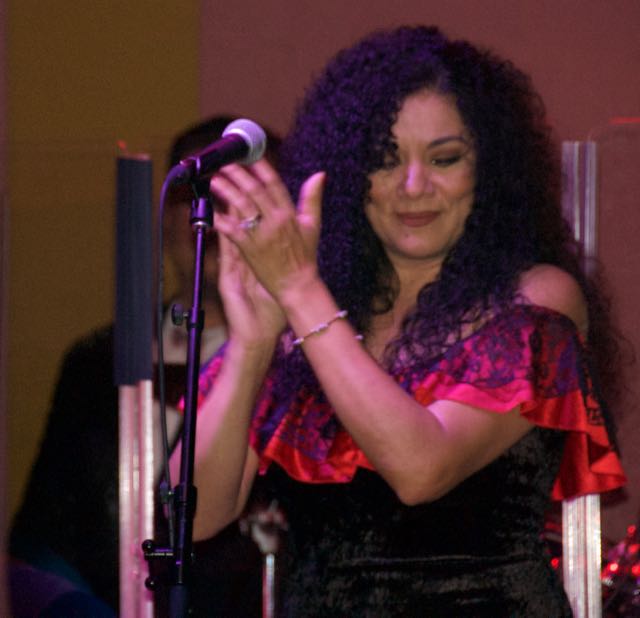 “She’s All That” poured out the bouncing rhythms that made one’s feet tap the floor in anticipation of dancing.  One of my favorite tunes was “She Brings Me Joy” which undulated with a lush, ecstatic melody as the horns/conga/bongos took the mood higher and higher.  The song exuded such happiness and celebration while Dudley sung of a man’s love for his woman.  Adding a tinge of Spanish lyrics and a very clever plug in at the end …”You make me so very happy.” (Blood Sweat & Tears) … Pure gold! 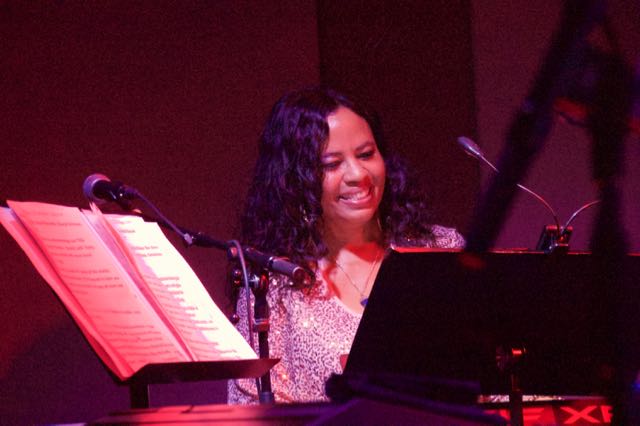 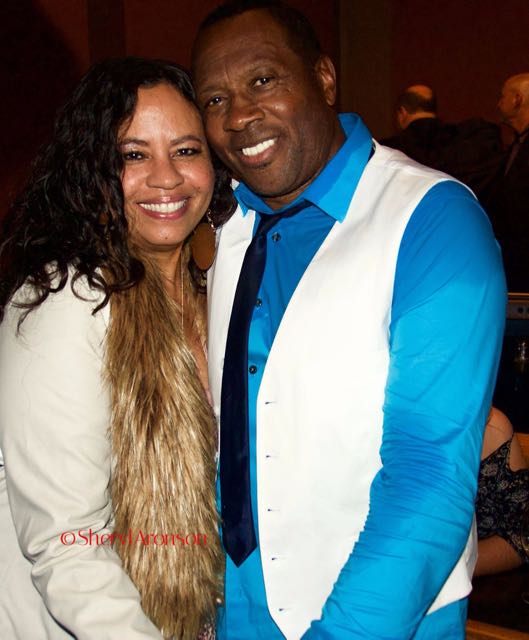 When Gail Jhonson took the stage, she lent her golden fingers and sharp keyboard playing to the song, “Georgy Porgy,”  A flood of improvisation flowed out of her hands as she and the band kicked the song into high gear.  However, a magical moment occurred when Gail and Ralph played a duet on the keys, to a new romantic ballad written by the Mr. SouLatino.     The room fell silent and the air fluttered first with a luscious vibe, which then turned into a passionate reverie.  Both Gail and Ralph knew they had a hit song on their hands when the audience broke out into thunderous applause. 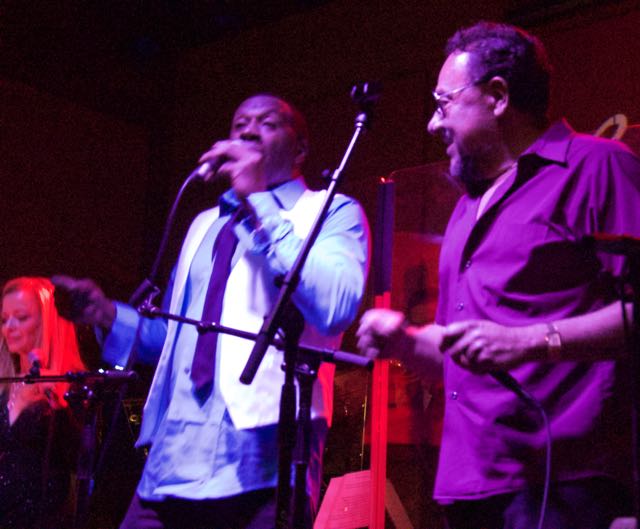 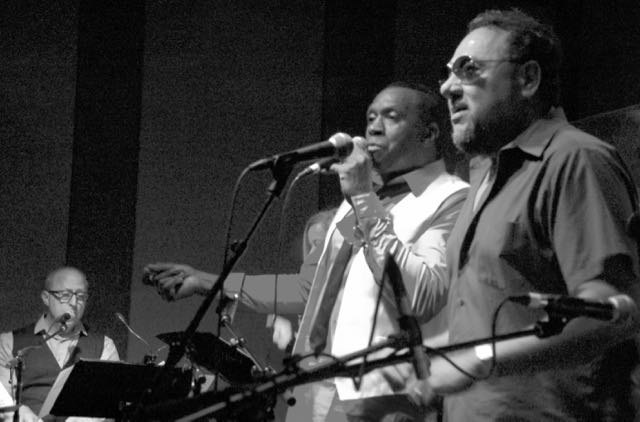 Bobby Rivas, a salsa/balladeer, singer/composer performed “This Is The Moment” with Ralph, and commanded the stage with his expertise.  A deep link to the historical lineage of Latin Music was felt as Rivas belted out the lines in Spanish.  It sent chills through me.  Dinorah Klinger also contributed to the authentic Latin style of music as she wailed with hauntingly, rhythmic tones to the song, “Lie To Me.”  Her raven colored hair flowed down her back and covered her face at one point in time.  Her silhouette created a mysterious Lady in Red spectacle. 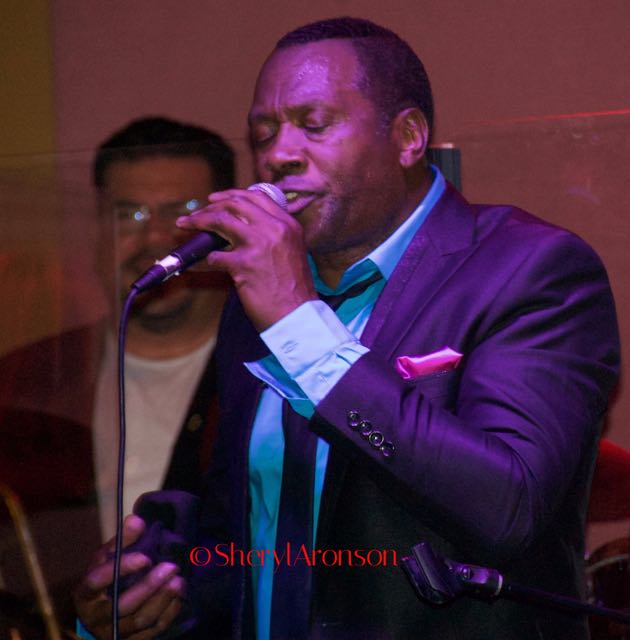 “Women of Beauty” was the song Ralph Dudley dedicated to all the beautiful women in the audience and extended that dedication to women around the world.  The band broke out into the bright pulse of rhythm with the salsa beat.   Dudley sung…

Women around the world

I sing about you.

I sing about you…”

The congas, bongo, and timbales cracked and popped, the horns blasted spicy hot, and Ralph Dudley’s voice resonated throughout Spaghettini.  The love for the music, the love for life and joy poured over the audience with the brilliant colors of the SouLatino band. 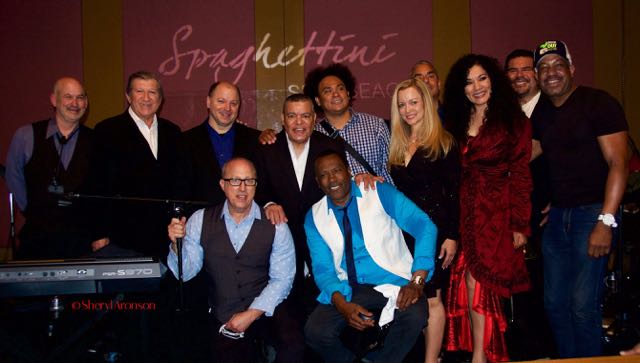 “The song is called “Women of Beauty,” and it’s a tribute to women worldwide… the goodness that they bring, without women, they would be no us.  I am honoring the beauty of women, inside and out,” Ralph Dudley shared.

Then Ralph Dudley raised his voice high with his caressing falsetto phrasing.

SouLatino will now be heard all over the world.

For more information regarding Ralph Dudley: