It has superb writing/directing/ comedic and dramatic acting/

I found myself laughing throughout the movie

It tells a romantic story without any explicit sex scenes, but you still feel the hot chemistry between Maggie (Tanna Frederick) and Stewart (James Denton).

On Wednesday, July 6th, Linita Sotelo-Masters (The Hollywood 360) and I attended the Los Angeles premiere of Henry Jaglom’s latest film, “Ovation” at the Directors Guild of America (DGA) in Hollywood. In October 2015, I was invited to a private screening of “Ovation” and below is my original review.  I loved the film the second time as well. Find out why! The film opened July 8, 2016 in LA at the Laemmle Theaters and will open July 22 in NY & continue to platform throughout August. It’s a definite go to summer movie. An article and interviews about what happened behind the scenes on the red carpet at July 8 premiere to follow in TheHollywood360. Find out some amusing stories that have happened to actors behind the scenes or backstage.

Last night I attended a screening of Ovation, which is the newest Henry Jaglom film, starring Tanna Frederick and James Denton. This is a light-hearted throwback to the days of Tracy/Hepburn, Gable/Lombard where the two love interest protagonists banter back & forth with an innocent sexual underlying tension. Frederick peppers her role of Maggie, the altruistic theater actress, with just the right amount of comedic spice and dramatic flair; while Denton flavors his role of the dashing leading man television star, Stewart, with a slow seething sweetness and smoldering sensuality. Together, they spark the screen as you root for their coupling.

The movie opens with an aerial view of Santa Monica as Ella Fitzgerald sings Lullaby of Broadway. Although the movie does not take place on Broadway, but at the Edgemar Theater in Santa Monica, the story does focus on what happens behind the scenes of a theater production.  Jaglom chose to film the real life production of The Rainmaker, which was playing at the Edgemar and starring his wife, Tanna Frederick.   The actors in The Rainmaker became the actors in the movie and, Viola… a story of romance, murder and saving a theater hatched.  Jaglom said in the Q&A after the movie,

“These were the real actors in The Rainmaker.  Ron Vignone and I sat down with an idea to make a movie of what happens backstage.  We wrote a mystery caper and romance.”

There are the bumbling capers of the male acting crew members who traverse across the theater stage and the stage of their personal lives, while conversing on such diverse topics as the ails of being an actor and how women complicate their lives. Jaglom’s real life son, Simon, and daughter, Sabrina play a real life brother and sister in the story who are both slightly quirky…Simon watches over the world from his sacred tower booth above the stage reading Carlos Castaneda’s books and championing his sister, who plays a fiery damsel in distress unable to make up her mind between going for a talented, love sick playwright or a handsome, tragic but abusive actor.

All of these shenanigans are looping around a devout businesswoman who’s trying to save the theater from closing… Maggie’s rabid manager and agent want to close down the play for financial gain…and a sleuthing psychic who blurts out predictions like a Biblical prophetess.

Jaglom’s choices of an old fashioned soundtrack full of showbiz tunes brighten the mood throughout in a playful, spirited way. He said, “I’m obsessed with show biz music.  I love the emotions that these songs stir up in people.”

The audience laughed during the entire piece enjoying the ensemble casts’ multi layered existence behind the scenes of a theater production.  Frederick’s comic timing and improvisational acting was impeccable.  In one scene she sits at the piano reading the television script that the James Denton character gave to her.  However, her face is covered in an emerald city-green clay mask just showing her eyes.  Denton sits down beside her and she flirts, she cajoles, she lectures, she charms, she convinces and wins his heart.  Denton’s facial expressions and eyes are marvelous in the subtle reactions he is having toward the lovely muse.  The chemistry burns here.  In another scene Ms. Frederick sits slumped in the chair of her dressing room stuffing juicy fruit gum in her mouth because she’s depressed.  She allows herself, once again, to be natural and raw in her emotions, yet hysterically funny and adorable. 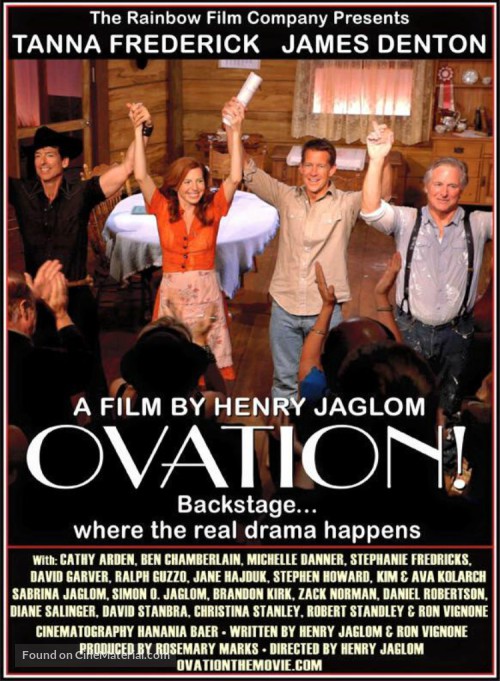 All the actors in the film provided a delicious feast of comedic timing and performing. The funny lines worked because of the expert rhythms of these veteran actors and the writing was simply waggish.

Ovation might not get a standing ovation when the film is done, but it certainly entertains and leaves us with complete satisfaction that the two stars have overcome their obstacles and walk off into the sunset of yet another film or theater production…