Infertile: A Sketch Comedy Show at the Upright Citizens Brigade Theater in LA

A Friday night at UCB in LA. A crowd ready to roll. Ready to laugh. Ready to roll on anyone who didn’t laugh. A star of HBO’s VEEP was in the crowd of fun LA young’s out for a Friday night. Everyone, including 50 year olds, looked young as I had just visited a 70 year-old friend dying of cancer. 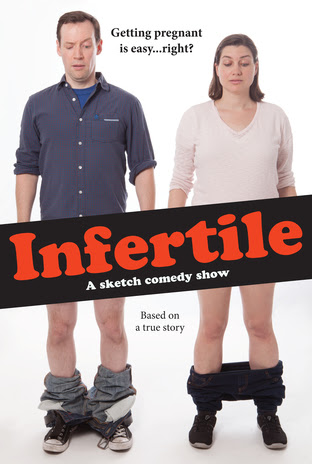 The first comedy act was very interactive with the crowd, more so than any act I’ve ever seen. They were definitely funny enough that we didn’t all loathe them for making us participate so much. One sing-along started with us repeating and building on lines about peaches and mangos being sweet, and surprised us with an ending line about nothing being sweeter than love for Jesus Christ. Yep, we all sang that. Lol.

They got ballsy and ran a sketch of one guy releasing a new tech-invention, Steve-Jobs-with-a-PowerPoint style. Except in their PowerPoint someone had snuck in photos of dicks, much to the presenter’s exasperation. He turned it into advertising on the product’s dick-pic taking abilities. I was shocked that they were creative enough to show us at least 20 different pictures of dicks without the joke going limp. It could have easily turned the crowd against them, but did not! Haha.

The scene changes were Python-esque, in that they feigned making something basic sound elegant and brilliant, as they performed ballet while moving chairs around. It was ultimately a silly joke that wasted everyone’s time. And I appreciate that. I really do.

All the way, was the answer. They called out every single person in the crowd for being “someone they knew”. A farce ensued as old improv teammates, 4th grade soccer teams, and extremely diverse cousins were called onto stage. I was an old substitute teacher. By the end, our two silly performers sat in the now empty audience seats and applauded us, then abruptly left. You fuckers… well played. Everyone had a good time.

The second act, the main act, had a more real life tone from the start. The actors, John Murray and Silvija Ozols, confident and calm performers, are clearly living what they’ve written, which is their real-life struggle of being infertile. The opening scene laying this groundwork takes place while two young-in-love people voraciously French kiss and bark short retorts to our heroes pained questions. Why is reproduction so easy for others but not for them?

The two kissers were back the next scene but in different roles, which depicted our heroes running the gambit of consulting different clueless doctors. Goodness. Looks rough. Sounds expensive. It’s an enlightening scene.  One suggestion includes acupuncture. John relates the man’s role in all of this to being like “an asshole on an elbow.” Useless and taking up space.

Our heroine explained how she takes medicine through needles twice a day. To demonstrate how comfortable she has become with needles, she offered some young guy in the front row a chance to inject her with a dose of meds into an “X” marked on her back. WOW. Struggle has bred new comfort levels for her, but the audience was squirming. The guy holding the needle, encouraged by a 3-count, couldn’t bring himself to do it. Ha! I would’ve. A much older, clearly more experienced woman next to him offered to do the trick. OK, on the count of 1…2… “Stop Stop! I can’t believe you were actually gonna do it! You’re a stranger lady! I just met you!” We were all laughing. Silvija tells us when she performs the joke in NYC, no one actually tries to inject her. Hahaaa.

In between scenes a simple looking cartoon plays explains some of the detailed points of infertility. The cartoon is informative, and also witty, before eventually getting pretty graphic and ridiculous. Felt shades of South Park gore in the cartoons, which is a big plus! Quite a fun and informative way to change between scenes.

John and Silvija make you believe them and feel for them, and after they pour so much time, energy and money into solving their problems with infertility, you can see how they have difficulty interacting with more casual relationships in their lives. When a single friend asks if they’ve tried the new S’more’s donut in town… well you get that there are just certain parts of life you don’t focus on when you’re quarreling with human nature itself. On a double date, their friends bemoan them for missing a “rager at Mike’s house.” John says they were busy “raging against God for forsaking us.” John and Silvija laugh, but their friends don’t. Several other jokes related to infertility pour out of their mouths because they are comedians and that’s what they do. Laugh at life, no matter what. But their one friend can’t even take them for being “so insensitive to your own situation!” Haha. I felt that was a brilliant seemed that summed up a comedian’s experience in a painful life situation. It is a strange thing, needing to make fun of your own painful problems.

In a way this is all quite sad of course, and I found myself genuinely hoping that they end up with a child. Watch to find out! I will say that I actually did learn a lot from the show about what infertile couples must go through, and for that I am grateful. The actors, including the secondary characters, do comedic and convincing jobs in their roles. It’s a show worth watching as you may see your problems shrink a bit in the grand scheme of things, and understand there is still a way to laugh at them, no matter what.