KCET, the nation’s largest independent public television station, announced today that Deadline Hollywood’s Chief Film Critic and host of KCET Cinema Series Pete Hammond will join the network to host the network’s classic film series KCET MUST SEE MOVIES celebrating some of the greatest film classics created over the last century. First up for Hammond as the new host of the series will be a trio of Academy Award® Best Picture winners “Patton,” “From Here to Eternity,” and “The Bridge on the River Kwai” thematically tied to the start of World War II (Sep. 1, 1939). 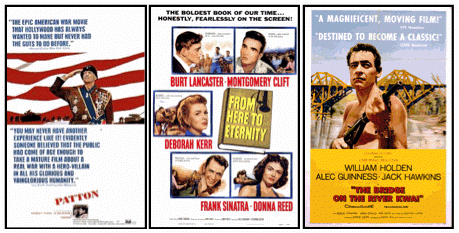 KCET MUST SEE MOVIES airs Fridays at 9 p.m. on KCET in Southern California with encores on Saturdays at 4 p.m. KCET MUST SEE MOVIES provides a destination for viewers of all ages to watch legendary stars in timeless movies considered essential by film experts (including Hammond) worldwide. Whether the movies inspire audiences, put them on the edge of their seats or bring viewers to tears, the wide variety of cinematic milestones included in the series are “Funny Girl,” “The Magnificent Seven,” “Butch Cassidy and the Sundance Kid,” “Rain Man,” “Speed,” “Some Like It Hot,” “West Side Story” and many more.

In addition to his role as Chief Film Critic, Pete Hammond has been the Awards Editor and Columnist at Deadline for the past five years. He is widely considered to be one of the pre-eminent awards season commentators for film and television. During his
career, Hammond also has served as film critic for MovieLine, Boxoffice Magazine, Backstage magazine, Hollywood.com and Maxim magazine. He is the recipient of five Emmy® nominations for his television writing and is the winner of the 1996 Publicists
Guild of Americaís Press Award, only the second journalist in the organizationís 50-year history to receive the award twice (also winning in 2013).

In addition to his new on-air hosting duties for KCET MUST SEE MOVIES, Hammond hosts the public television station’s LA-based weekly live screening event The KCET Cinema Series, a quarterly presentation of nine weeks of thought-provoking stories on the big screen prior to their theatrical release featuring post-screening Q&As with top movie talent. The screening series is open to the public with seasonal passes available for purchase. The fall season began on Tue., Aug. 16, 2016 and will screen some of
the most anticipated films of the season including the potential Oscar® contender “Denial” starring Rachel Weisz and Timothy Spall as well as the comedy “The Hollars,” directed by award-winning actor John Krasinski, who co-stars in the film with Anna
Kendrick and Margo Martindale.  The fall series runs from Aug. 16 through Oct. 10 and is sponsored by the James and Paula Coburn Foundation. To learn more about the series go to [ http://www.kcet.org/cinemaseries ]KCET.org/cinemaseries.

The upcoming KCET MUST SEE MOVIES on-air schedule is as follows (subject to change*): “Patton” – Fri., Sep. 2 at 9 p.m. PT on KCET in Southern California
Starring George C. Scott, the critically acclaimed “Patton” is a biographical film that follows the World War II phase of the controversial heroís career beginning with his entry into the North African campaign and ending with his removal of command. The
film took home six Academy Awards® for Best Picture, Best Director, Best Original Screenplay, Best Film Editing, Best Sound and Best Art Direction in 1971. Additionally, George C. Scottís performance won him an Academy Award® for Best Actor but Scott
refused to accept the award citing a dislike for the voting process and the concept of acting competitions.

“From Here to Eternity” – Fri., Sep. 9 at 9 p.m. PT on KCET in Southern California
In Hawaii in 1941, a private is cruelly punished for not boxing on his unitís team, while his captainís wife and second-in-command are falling in love. “From Here To Eternity” stars iconic actors from the 50s including Burt Lancaster, Montgomery Clift,
Donna Reed and Frank Sinatra. The film was nominated for 13 Academy Awards®, winning eight, including Best Director, Best Picture, Best Adapted Screenplay, Best Supporting Actor/Actress and more.

“The Bridge on the River Kwai” – Fri., Sep. 16 at 9 p.m. PT on KCET in Southern California Adaptation of the Pierre Bouelle novel about prisoners of war in Burma forced to build a bridge to aid the war effort of their Japanese captors. British and American officers plot to blow up the structure, but the commander of the bridges construction has different plans. The film was the recipient of seven Academy Awards®, three British Academy Film Awards, one Directors Guild of America Award, three Golden Globes, one Grammy and three New York Film Critics Circle Awards.

Join the conversation on social media using #MustSeeMovies and #KCETCinemaSeries[Marker]

ABOUT KCET
On-air, online and in the community, KCET plays a vital role in the cultural and educational enrichment of Southern and Central California. KCET offers a wide range of award-winning local programming as well as the finest public television programs from
around the world. Throughout its 50-year history, KCET has won hundreds of major awards for its local and regional news and public affairs programming, its national drama and documentary productions, its quality educational family and children’s
programs, its outreach and community services and its website, kcet.org. KCET is a donor-supported community institution. For additional information about KCET productions, web-exclusive content, programming schedules and community events, please visit kcet.org. KCET is a part of the KCETLink Media Group. Select original programming from KCET is also available for streaming on Hulu and Roku platforms.