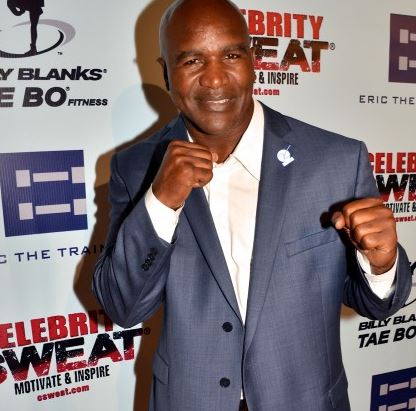 But no Awards show would be complete without a star-studded after party. Following this year’s Espy Awards, boxing legend Evander Holyfield hosted the “invitation only” annual Celebrity Sweat ESPY Awards VIP After-party along with Playboy Playmate hostesses

The VIP’s gathered at The Palm Restaurant in downtown Los Angeles were they enjoyed celebrity entertainment, a sumptuous steak dinner, drinks , a lip-sync competition and some celebrity swag courtesy of Celebrity Sweat and One Hope Wine. Not only were they there for fun, but in true Celebrity Sweat style, to support and benefit Breast Cancer Awareness.

Celebrity Sweat after party attendee Uriah Hall said, “I am a proud supporter of breast cancer, my mother is a survivor. It’s a great opportunity and I try to give back whenever I can.”

About Celebrity Sweat: Celebrity Sweat is entering its fifth year.  It is the number one celebrity based Health and Wellness program that goes behind the scenes to see how athletes and celebrities train, ultimately to motivate people to make health and wellness a priority, and to support a variety of philanthropic groups such as Breast Cancer Awareness.  Go to csweat.com for more details.

HELP IS ON THE WAY XXI - A STAR STUDDED AFFAIR!