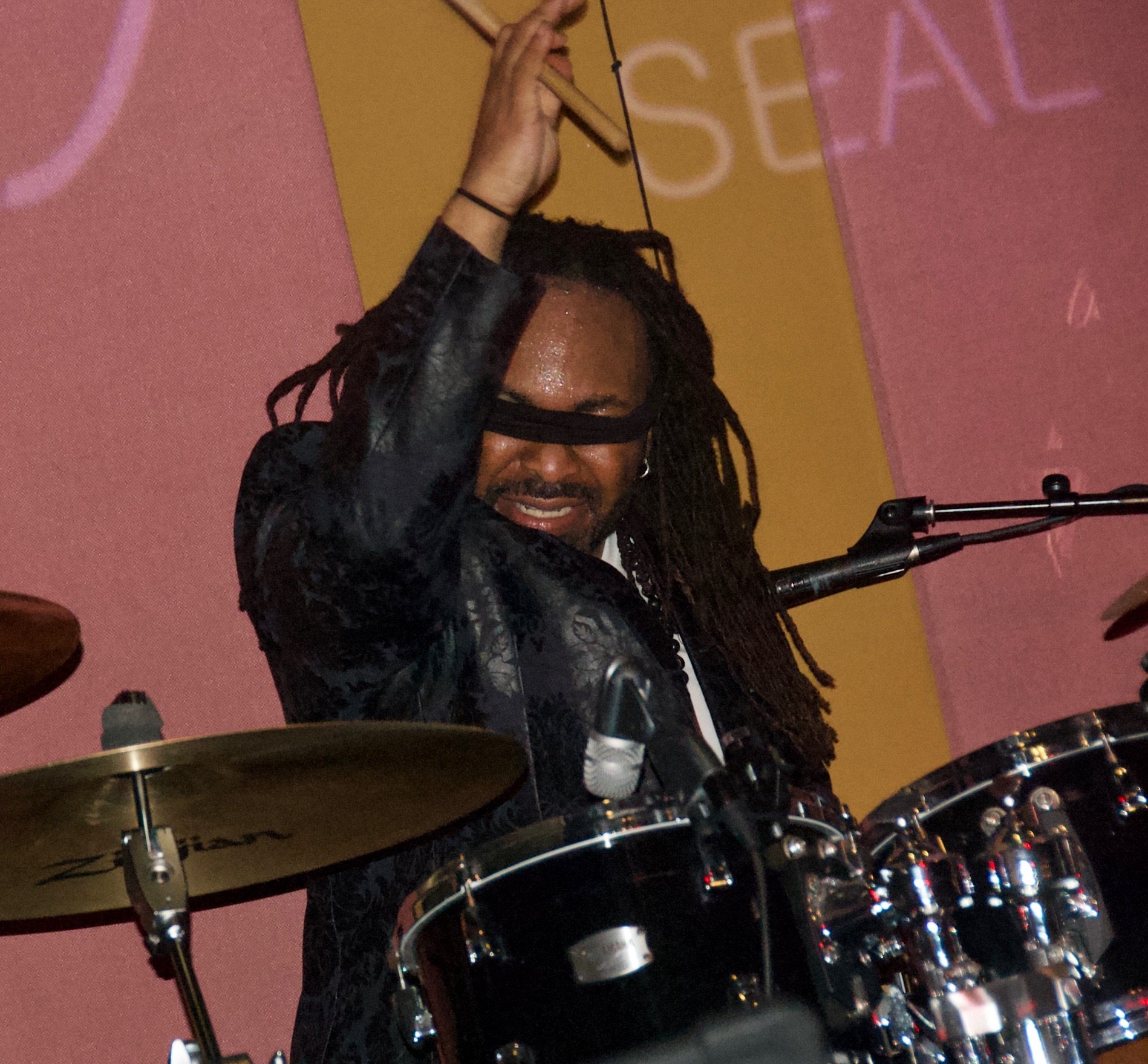 All night long, Eric jammed on the drums with his powerful and masterful chops while flinging those famous dreadlocks to the beat. We heard nine songs from his newest CD, Velvet Groove which took Eric almost 10 years to complete – because he has been touring with many other artists.  It was worth the wait!

Eric made sure the entire evening was full of his special feel of velvet groove which he described in his interview as, “Velvet Groove is about community – good energy – everyone coming together to work in accord with one another.” 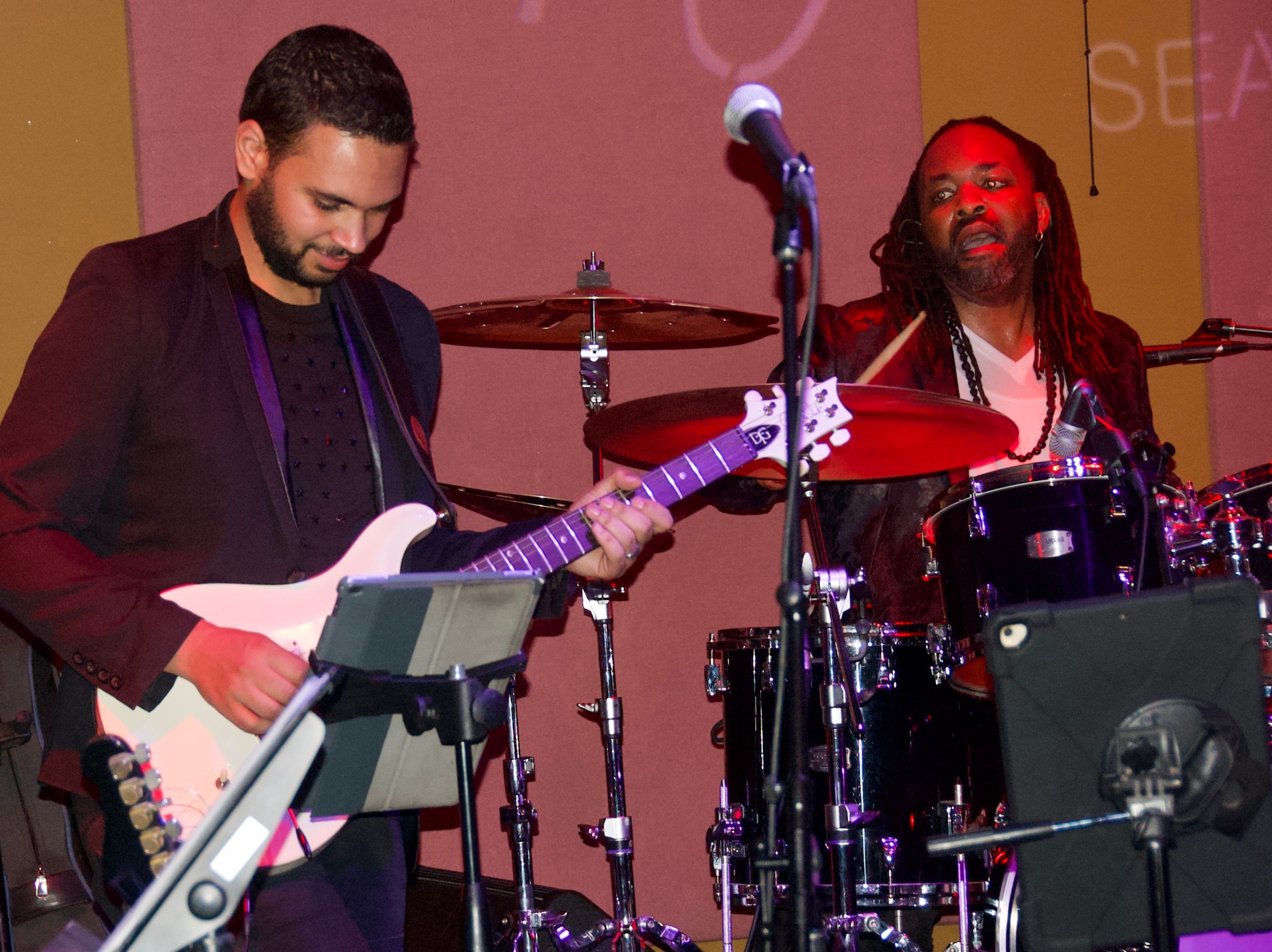 I spoke with Eric before he went on stage at Spaghettini.  Here is our interview.

The Hollywood 360: Tell me about your new CD, Velvet Groove.

Eric Valentine: The CD is about good vibes and good energy which I have created with a bunch of artists I have worked with over the years.  I love to produce and I love to write, so I wanted to do a project that represented the musicality of Eric Valentine – and the love of all these musicians that are on the recording.

The Hollywood 360:  What does the title Velvet Groove mean to you?

Eric Valentine:  Velvet Groove is about community – good energy – everyone coming together to work in accord with one another.  When that happens the end product is something very beautiful.  That’s what happened with this project.  No egos.  Everyone was very giving and very loving.  What I tried to do with this album was – whatever the particular musician did well, let’s do that, rather than ask them to do something they’re not. 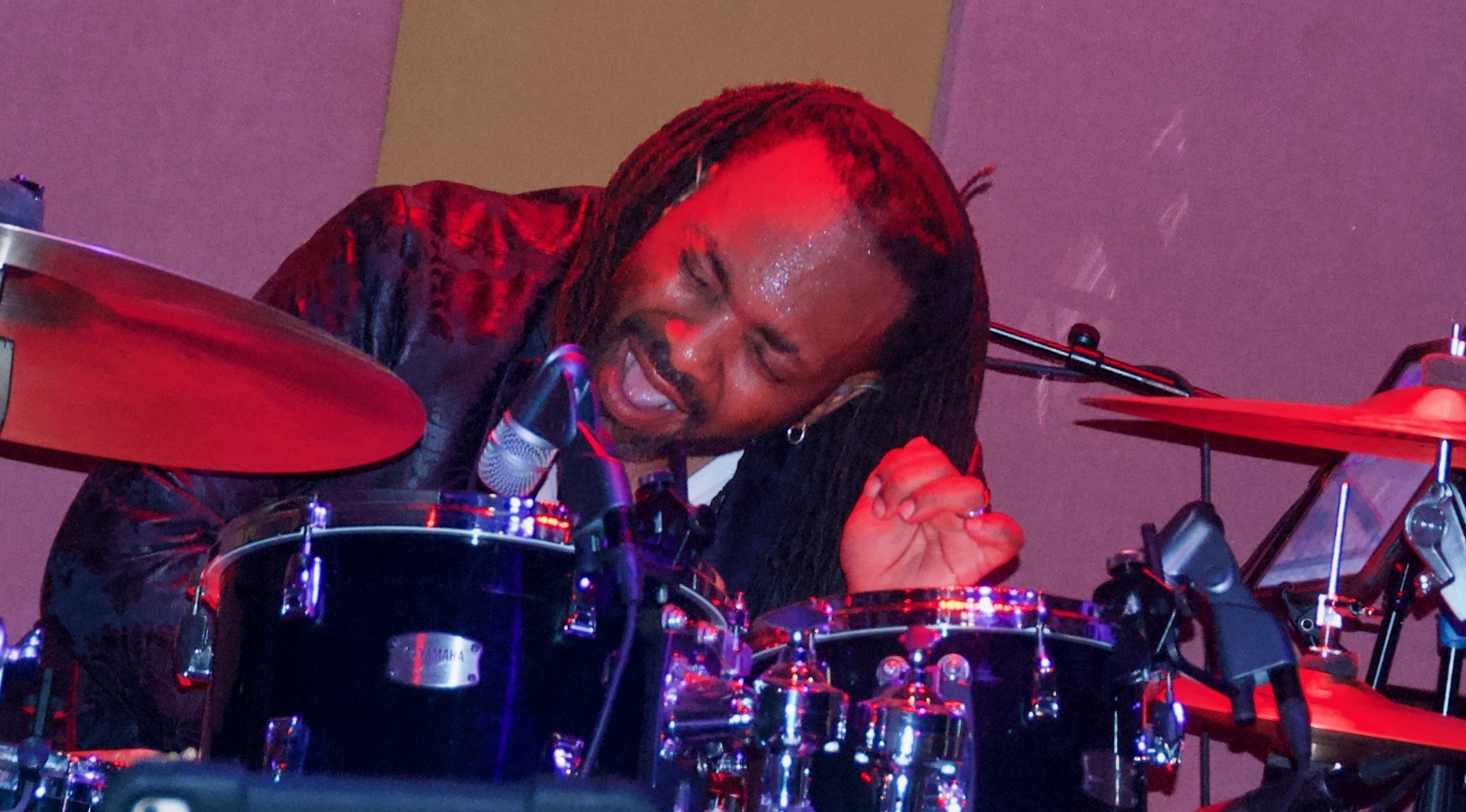 The Hollywood 360: How long did it take you to make the CD?

Eric Valentine:  Maybe about 10 years because I was running around touring with so many different artists.  I would work on a mix here – but finally I took a few years off.  I said, “No more.”  When I did that I worked around the clock for about 3 years.

The Hollywood 360:  You have so many special Artists playing on your CD such as Adam Hawley, Anthony Crawford, Hans Zemuehlen, Keith McKelley, Brian Simpson, Greg Manning, and the list goes on and on.  You are well loved.  But there is one special person who sings on your CD – your lovely wife, Bee Valentine.

Eric Valentine:  She’s an incredible woman – she’s my partner – she’s the reason Velvet Groove is what it is.  I went through some tough times in my career – there was a time I was going through depression even though my career was successful.  She came into my life and helped me reevaluate things and helped me to understand things that really mattered.  And that’s why we’re here. 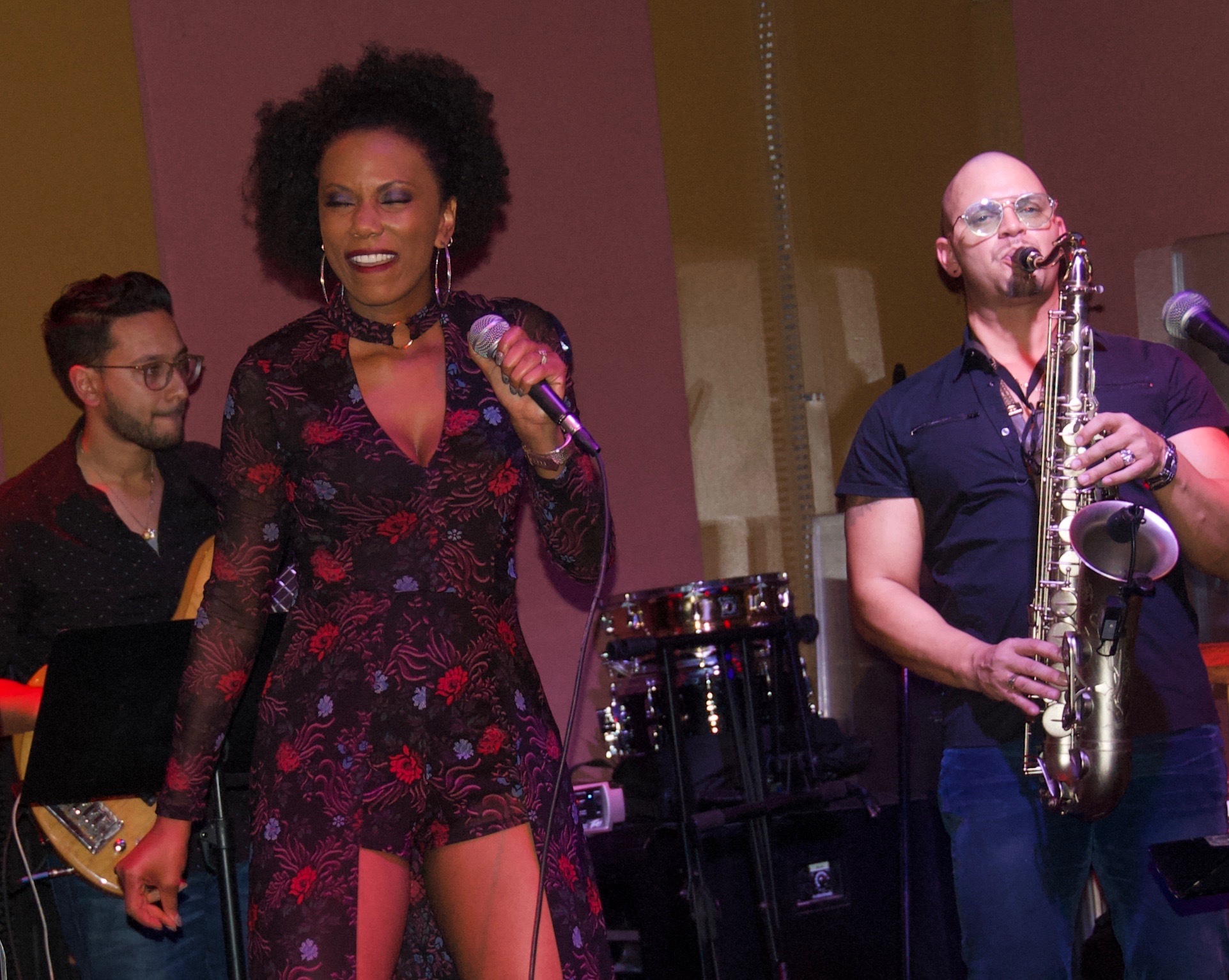 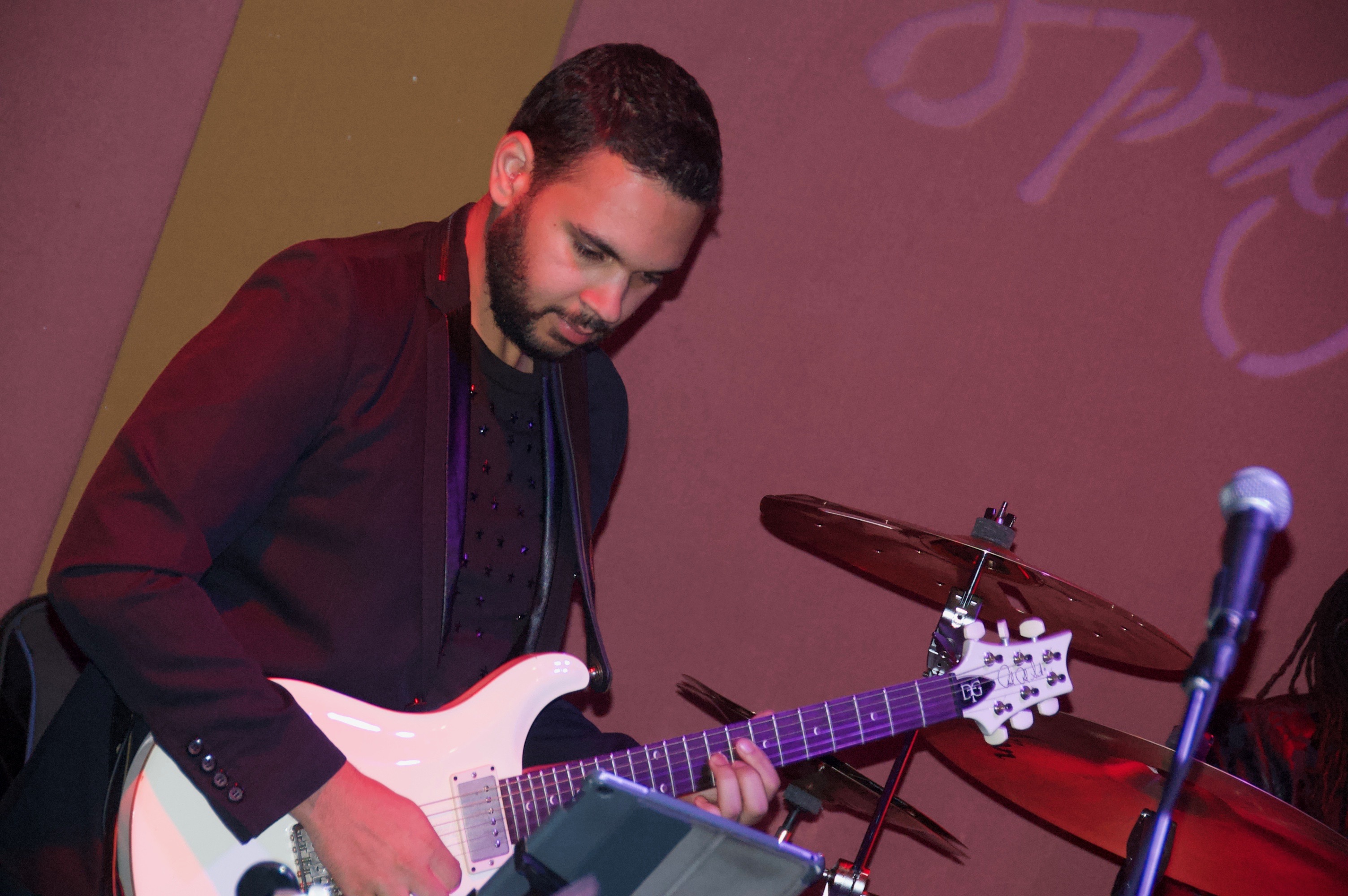 The Hollywood 360: There’s a song you do together on the CD called “Back In the Day.”  Talk about the origins of this wonderful tune.

Eric Valentine: “Back In the Day” is exactly what it says. When I close my eyes and play that movie in my mind I visualize being at a barbecue – home with my family – and we are having moments not worrying about anything.  Kurt Whalen was so kind to play on that song as well – when Kurt is there the atmosphere is like a barbecue vibe.  It’s all about feeling good.  That was the energy we wanted to create with the music in general.  Good vibes – good energy – creating something that makes people smile and you can put on in your car and you realize this album is finished and want to listen to it again.

The Hollywood 360: Where can people get this album?

Eric Valentine:  You can get it on I-tunes.  If you order it from our website, I will actually sign it and send it to you.  It’s very important to us to connect with people.  We want to keep this real and organic.

The Hollywood 360:  What are you looking forward to tonight playing at Spaghettini?

Eric Valentine:  I am looking forward to playing with these amazing musicians.  I have Adam Hawley on guitar, Anthony Crawford on bass, Benjamin Shepard on bass, Mitch Manker on trumpet, Keith McKelley on sax on the list goes on and on.

We are going to have our CD’s on sale and some special treats for people to buy.  It’s all about our fans … when I said I was working on a CD, people responded and I took that to heart.  We’ve been getting great support for our radio play and we’re #3 this week on Billboard. We’ve been on the charts for 20 weeks now.  We’re an independent label – my wife and me – we’re called Matcha Entertainment.

We were doing our GoFundMe push 8 to 10 hours a day because we care that much and wanted to connect with everyone.  Please go to our website to buy your CD and connect with us. I will sign it personally and send it back to you.

Back to the Groove

Joy Inside My tears

Back in the Day