An eight-hour slow-motion film with no plot, dialogue or actors will have its red-carpet premiere and global webcast this September. 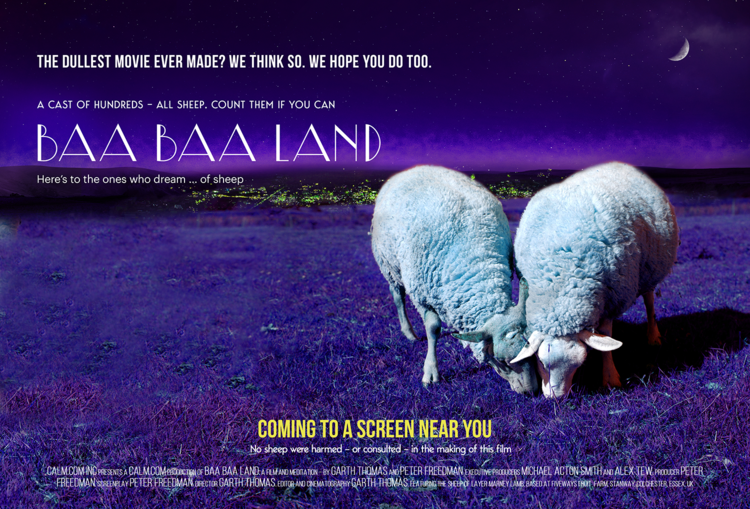 Baa Baa Land is a contemplative epic, entirely starring sheep. It is also our first movie, making Calm, as far as we know, the first app ever to produce a feature film.

The American-financed, British-made film will premiere at the Prince Charles Cinema in London’s West End this September, on the same date [to be announced] that we premiere it online for our global audience of Calm users.

The film is itself a meditation, a dream, an enchantment … a tonic for the soul.

It is also an example of “Slow Cinema”, a genre of art films known for long takes, slow pace and lack of action or narrative.

Is it also the dullest movie ever made? “We think so”, says Peter Freedman, its producer. “We hope that audiences will too.”

Like the Star Wars, Harry Potter and Indiana Jones movies before it, Baa Baa Land is financed with American money but made in the UK by mainly British talent. It was shot entirely on location in Essex, a few miles from London.

“We’re in discussion about U.S. and wider distribution and in talks with an American TV channel”, says Michael Acton Smith, its other executive producer and Calm’s other co-founder..  “We don’t expect it to break box-office records but believe there is at least a niche audience for it.”

“In a world of constant stress and information overload, of anxious days and restless nights … comes the chance at last … to pause … to breathe … to calm our racing minds and fretful souls… to sit and stare … at sheep.”

“Baa Baa Land is the first screen epic entirely starring sheep. A cast of hundreds… all of them sheep. Count them if you can – but don’t stress if you can’t. Sit back, wind down, drift off … to sheep.”

Baa Baa Land has no car-chases, explosions or star names. All it has is sheep and fields.

Long, loving takes – some up to an hour long – show the sheep in question, standing around in fields, doing very little.

While the average camera shot in Hollywood action movies like The Bourne Supremacy lasts two seconds, the average shot in Baa Baa Land last over 30 minutes.

Apart from some music over the film’s credits, the only soundtrack is the sound of sheep making … the sort of noises that lend the film its name.

Baa Baa Land is no relation to La La Land, the recent Hollywood hit with Emma Stone and Ryan Gosling. Its poster, however, does pay an affectionate tribute to La La Land’s and to a line associated with the latter, declaring, “Here’s to the ones who dream … of sheep”.

It is, if anything, more of a hommage to the films of Andy Warhol, the late American avant-garde artist and film-maker. “Many laughed at Empire, Warhol’s eight hour, slow-motion movie of The Empire State Building on its first showing in 1964”, says Acton Smith. “But it’s now considered a classic.”

Baa Baa Land was conceived by its producer, Peter Freedman and directed, shot and edited on a “modest budget” by Garth Thomas, a British director of arts films.

Baa Baa Land features the Welsh Half-Breed sheep of Layer Marney Lamb near Tiptree in Essex. The farm’s sheep graze on local parklands and water meadows at the low density of three ewes per acre.

“No sheep were harmed – or consulted – in the making of this film.”

Baa Baa Land’s length of eight hours may put off some but it makes the film only the nineteenth longest film of all time – five minutes shorter than Empire, Warhol’s 1964 film, and the same length as his 1967 work, The Imitation of Christ.

The longest movie ever made is Logistics, a Swedish experiential art film made in 2012, and lasting 857 hours or 35 days and 17 hours.

Baa Baa Land’s rivals for the title of the dullest film ever made include Paint Drying, a 10.5 hour movie about drying paint, classified last year by the British Board of Film Censors as “suitable for all”.