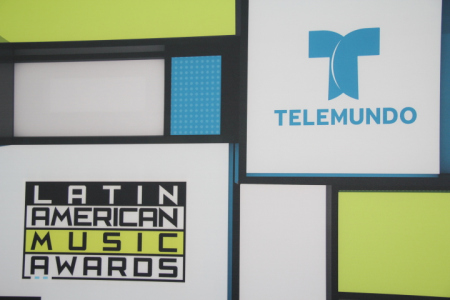 The Hollywood 360 was granted access to the rehearsals and had the opportunity to speak with some of the nominees and presenters to get their feelings on the inaugural LAMAs.

On Monday, Oct 5, enthusiasm was in the air as rehearsals got under way at the Dolby Theater, Hollywood, California, kicking off the official countdown to the inaugural “Latin American Music Awards,” a Spanish version spin off of Dick Clark Productions’ “American Music Awards” taking place Thurs. – Oct. 8, 2015, which will be televised by Telemundo beginning at 8 p.m. ET/7C, with a one hour pre-show red carpet special.

Like the AMAs, the two- hour show will feature performances and collaborations, by chart- topping artists in English and Spanish, and the awards to be handed out are based on key fan interactions with music, [including but not limited] airplay, sales, streaming and social media activity compiled by Nielsen, the Next Big Sound, and of course Billboard.

Among the nominees making their way through rehearsals on Monday, Oct. 5, was young Regional Mexican heartthrob Luis Coronel, who is nominated under the Best Regional Mexican Male category alongside his fellow Del Records [label mates] recording artist Regulo Caro, and Gerardo Ortiz, who also has another nomination under the Best Album of the Year category.

“I feel very happy and excited to be able to be part of these awards, to be able to give them our music, our touch, the Regional Mexican, the Spanish language, for all the people I want them to know we bring positive messages and vibes, that there’s a lot more to the Regional Mexican than the bad rap and criticism we sometimes get with the narco-corrido [folk tales on the narco culture], Regional Mexican is also romantic with a lot of feeling, there’s a lot more behind the music,” with a big smile eloquently expressed Coronel. “I’m excited to be nominated with my label mates both Regulo Caro, and Gerardo Ortiz, their nominations go to show how much they have worked, it’s an honor for me and yes’ I am super excited I will get to perform, being I am just nineteen and have been doing this for three years.”

As the countdown continued it was on to day two [Tues. – Oct 6], we also spoke with Regional Mexican singer Gerardo Ortiz after his rehearsal to get his take on the nominations and his feelings concerning the awards.

“I feel really happy and blessed with the two nominations, to be here with all these great artists with such a long trajectory. I am really grateful to be here representing banda music. I will be singing “Porque Terminamos,” [“Why Did We End”] a banda song for all the ladies. Under the Best Regional Mexican Male category is also Regulo Caro, who also happens to be my cousin, and Luis Coronel, It’s been a year of a lot of hard work and I believe there’s power in unity, and we are doing what we love and what’s in our blood.”

As the second of day progressed Hollywood 360 also had the opportunity to speak to urban raggaeton artist Farruko, who hails from Puerto Rico and has a nomination for the song “Me Voy Enamorando,” [“I’m Falling For You”] a collaboration with urban duo Chino y Nacho, under the LAMAs Favorite Tropical Song category, to get his take on the importance of the awards, his performance and how the collaboration with Shaggy and Nicky Jam on the song “Sunset,” came about.

“I was glad and surprised to be nominated, but I feel more excited about my performance than my nomination, even though they are equally important. I’m happy about my performance with Shaggy, the song we are doing is called “Sunset,” and even though Nicky Jam is also featured on the song, due to other obligations overseas he will not be present to perform it with us, but I sent him my blessings and a big hug,” explained Farruko who also added, “I found out about my nominations through social media from my fans.”

One theme that resonated throughout the Dolby Theater with all the artists and presenters I spoke with, was the importance of the awards as another avenue and platform for them to be seen and heard.

During day two rehearsals there was also a special press conference held by Mexican singer, actress, and presenter Lucero, who will be hosting the LAMAs.

“I am blessed and honored to have been chosen as the host for the inaugural LAMAs, this is the reason I picked this beautiful gown I am wearing tonight, tomorrow will be a magical night, we have a special award show program scheduled for our audience,

this show is special due to the voting process which is determined by the fans worldwide. We will have at least twenty personalities from all over the world, with six collaboration performances, the stage will be divided in three sections which will be very attractive with state of the art graphics and lighting, and there will be a very deserving tribute to the Cuban icon Celia Cruz. I am honored Telemundo will be transmitting this live simultaneously throughout the world and during the first thirty minutes of the show, the fans will still be able to vote for their favorite new artists even though voting technically stopped September 30th, this in my opinion will bring engagement and excitement to the show,” expressed Lucero. “As to the importance of the awards, I feel Latin is hot and is in. So I hope you’ll all be glam up looking your best.”

Another day two rehearsals excitement surrounded the rehearsal by artists Maluma, La India, Yuri, and Aymée Nuviola (along with mega producer Sir George on piano) who will pay tribute to the late Cuban singer and icon Celia Cruz, considered the Queen of Salsa.

After rehearsals TNT was honored to have a few words with Puerto Rican salsa singer La India [considered a Salsa music legend herself] about what Cruz meant to her and how the tribute came about.

“I feel very blessed, I humbly grew in the island of Puerto Rico with my family, we’re a joyful people with lots of love, and with that energy, tenderness, love, and sweetness that Celia brought to the island [Puerto Rico] when she came to sing and perform is what we are celebrating about her in this tribute,” expressed La India. “When Sir George called me to be part of this tribute, it brought a lot of emotions and joy, to be part of Telemundo, and the LAMAs is an honor, Celia deserves this tribute and a lot more.”

She [Celia] always use to tell me… “Stay your sweet, and humble self and don’t ever change.”