Sometimes drummers don’t get enough attention. They’re way in the back on the stage and are usually covered up by the literal face of the band (A.K.A. the lead singer). If they’re attractive, they get paid attention to for their looks rather than their talent, however, Guitar Center does a commendable job of dedicating their annual Drum Off competition to an instrument that can easily be looked over. Guitar Center started their 27th search for the next great, and possibly legendary, drummer at the beginning of August 2015 and narrowed the extremely talented group of contestants down to five percussionists to compete in a final drum off. Club Nokia in Downtown Los Angeles housed the epic finale on Saturday, Jan. 16, where the contestants brought their game and the judges—featuring Rascal Flatts’ Jim Riley, Tom Petty & The Heartbreakers’ Steve Ferrone, 2002 Drum Off winner Queen Cora and more—faced the difficult task of choosing a winner. The 2016 lineup consisted of five remarkable drummers that each brought their own techniques, personalities and overall musicality to their performance. Each one had distinct traits and not one was less memorable than the rest.

Burks started off the competition with a strong hip-hop influenced drum medley (which included Tupac’s hit “California Love”) that got the audience grooving to the beats. He’s the type of performer where audiences can tell how grateful he is to be performing, especially because he thought he wouldn’t be able to play again after injuring his wrists in a drunk driving accident this past November. This was Burks’ second time in the Drum Off finals (his first was in 2013), and while he was determined to win it was apparent from the look of pure joy when he performed that being able to play another day was worth more than any prize 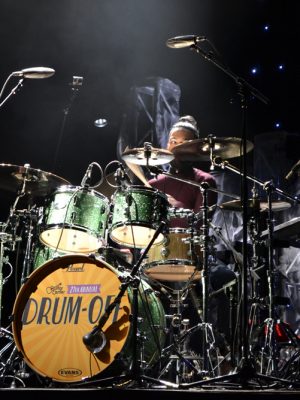 Burgos Jr.’s set began on a polar opposite note to Burks’, in which there were clear theatrical elements that influenced him. His song choices were an eclectic blend of orchestral pieces and pop hits—everything from racks like Paramore’s “Ain’t It Fun” and Michael Jackson’s “Thriller” to Journey’s “Don’t Stop Believin” and the Rocky theme song—that highlighted recognizable moments in music history. This year was also Burgos Jr.’s second time (his first in 2010), so he was determined to win over the audience and judges with his passionately fun drumming persona.

Taylor Jr. was the youngest contestant in the competition, and this was his third time taking part in the Drum Off. It’s always amazing seeing young talent get the recognition they deserve, and Taylor Jr. was ready to prove everyone that age doesn’t matter when it comes to musicianship. His set was almost like a combination of the two competitors before him, but his performance style was impressively concentrated and focused—envision Miles Teller’s character in the film Whiplash. However, he was very engaging of his crowd, which is a skill that’s just as important as talent itself.

Bell was a contestant in 2013’s Drum Off and was back to try to take home the title. Originating from Cuba, Bell incorporated his heritage into his drum set and almost turned Club Nokia into a Latin club night. His medley focused on slower-paced grooves compared to the other contestants, but stood out due to him sticking to his musical roots. It was as if we were learning more about him as he performed his set and it was definitely a beautiful sight. 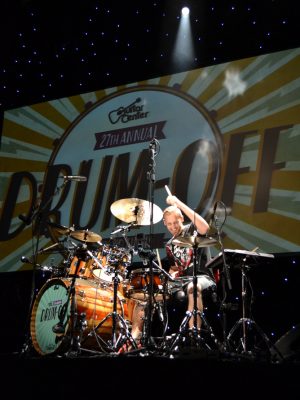 The competition’s final contestant was So-Cal local Zackey. Being a rookie to the finals, Zackey had a lot to prove against his competitors, who have previously made it to the end. He said that he wanted to show the judges and audience something they’ve never seen before, and he certainly did that with his set. He used classic rock influences, marching band experience and being in a metal band to create a set that showcased that it doesn’t matter what your musical background is because there is always a way to combine them to make something completely original.

The 27th Annual Drum Off, hosted by drum legend Gregg Bissonette, was more than a just a drumming competition. It was also a celebration of some of the most talented drummers in the world as well as a way for the drum community to come together to support rising talent.

Apart from the contestants and the legends themselves, this reviewer was impressed with the amount of people that came out to watch an undiscovered drummers competition. Club Nokia was completely filled, and it really showed that people could be enthusiasts for instrumentalists just as much as they can be enthusiasts for a band or artist. The talent that graced the stage proved that an instrument, in this case: drums, can be just as or even more powerful than if there was a full band performing. Congratulations to Tony Taylor Jr. and his bright future ahead of him.