Breathe A Contemporary Tale Of How Far Man Has Fallen

Right now the brilliant production of Breathe is playing at The National Black Theater Festival under the direction of Levy Lee Simon and playwright Javon Johnson.  It will be performed Tuesday, August 2nd,  at 3pm and 8pm and Wednesday, August 3rd at 3pm and 8pm.  I wanted to share my review of this provocative piece that I wrote when Breathe was performed at the Greenway Court Theater in Los Angeles.

Greenway Court Theater…Los Angeles, September 25th… Breathe, directed by ‪Levy Lee Simon and written by ‪Javon Johnson is a brilliant work of theater on very contemporary topics…racism, kids and guns, family disintegration, how in a moment our lives can change forever, fathers and sons, mothers and sons…and how far as a society we have fallen…fallen behind.

As the two boys say at the beginning of Breathe… “Waiting to be called”…which takes on so many meanings…we are all called to our destiny…what we do with the calling is determined in every breath we take.

“Falling behind”…Lost track of time…”  “Waiting to be called.”  Such telling lines are repeated continuously throughout the play and forced one to go deep inside the moment we stepped into the lives of the two adolescent boys, Andre and Casey.  Both boys have murdered people, both boys were desperate to find their own voice in present time as young men, both boys have fallen behind because…

Breathe poked and prodded as to the reasons why such horrific events take place in our society today, tomorrow and yesterday.

The playwright, Javon Johnson foreshadowed the future fifteen years ago when he wrote the last line of Breathe as the tragic lament of Andre, “I can’t breathe…” In the present day time, the American public watched in horror on the television Eric Garner choking out his last breath from police brutality.

In Breathe the character of Andre has been sentenced to life.  He killed a boy for taking his bike.  “I don’t feel like a man,” he yelled at his parents.  In the neighborhood, he lived in if you’re not tough, you lose your dignity, your respect.   Casey, the white young boy was constantly being told by his parents to “Fix it…” meaning fix himself.  They seemed to disapprove of every molecule of his being that he felt defined him. His mother exemplified the Super Woman Syndrome…too stressed at work and running the home,  Casey’s father, a policeman,  appeared disconnected from his son, never understanding his son’s angst.

The sense of Isolation and despair accompanied by the easy access to guns creates a disturbing environment for adolescents.   Violence bombards the news; so many children play war video games. What dark forces contribute to teenagers picking up a gun and taking the precious life of another?  How disconnected and angry does a child have to feel to commit murder?  “In three minutes my life changed forever,” Andre cried out.  One’s heart is wrenched with compassion for his terrible insight.

The most poignant scene in Breathe was when Andre’s father finally decided to visit his son in prison.  Up to that point, only Andre’s mother went to see him.  The intense, deep despair of the two characters drenched the audience with the overwhelming pain of the father and son.  I cried.  I cried again when I saw the play for the second time.   The multitude of emotions thrashing throughout the father’s inner self- are cast upon John Marshall’s face. (He plays Isaac, the father) In this brilliant piece of acting, Marshall ‘s imprisoned expression of suffering seized our hearts.  The father then stood up and left…Andre still talked to the empty chair as if his father was still there.  Kamahl Naiqui’s (Andre, the son) posture depicted a broken boy desperately trying to be strong, trying to be a man, trying to breathe life back into himself because his father can’t do it anymore. 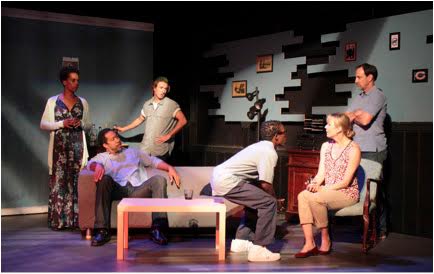 “I want to start over again because I love you…” Andre wept.

How does Andre start over again?  How do families recover from this desolation?  How do we as a society not “Fall Behind” over and over again?

Breathe might not answer these questions, but hopefully, you will go out of the theater wondering and pondering what you might do while you’re still on this planet, breathing. 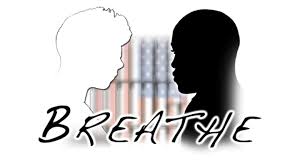 For more information regarding Breathe at The National Black Theater Festival go to: https://ncblackrep.org/all-2017-nbtf-events/