Don Franklin, film, television and stage actor felt compelled to take on the role of Walker, a newspaper reporter who is an ardent champion of truth in the theater production of Two Rooms.  He was on his way to New York City when a friend texted him requesting he read an email…” I got an email from someone I did not know…I was preparing to go to NYC and my friend texted me saying, ‘you got an email and didn’t open it because you didn’t recognize the name…open it.’  The actor found out it was about a play, a very important piece that intrigued him.   “I got on the plane…  read the play and knew I had to do it.  Two Rooms embodies the reason I do theater.”

Two Rooms, written by Lee Blessing back in the 1980’s tells a melancholy love story plagued by terrorists kidnapping a husband, Professor Michael Wells, who is stuck as a hostage in Beirut, and his devoted wife Lainie, who is fighting for his freedom back in the United States.  She is up against the bureaucracy of the United States Government, here represented by the character Ellen, who dutifully visits Lainie once or twice a week expressing banal verbiage meant to encourage…”We must maintain cautious optimism,” and about hope being “a real and present possibility.”  On the opposite side of the tragic situation is Walker, the journalist, who is angry and forceful. He galvanizes Lainie to expose the government’s ineptitude.  Walker yells at her, “Care about your husband… do more…speak out.”

As the play unfolds, the concept of two rooms unfolds in many metaphorical ways.  First we watch Lainie create a room in her house that is barren…stark…no light is allowed in.  She is matching the cell that she imagines imprisons her husband.  Obsessively, Lainie moves the red carpet around in a desperate attempt to find comfort.  Throughout the story, the couple’s parallel conversations take place as they reach out to each other…imagining…longing…connecting – two rooms of the heart existing simultaneously.

There are two rooms in the battle for truth.  Ellen’s truth, which represents the government’s rules for freeing hostages and needing covert actions for success.  Walker’s truth, of how the Press should inform the world of the hidden agendas that the government imposes on families for freeing hostages.  Both fight for Lainie’s allegiance.  Both manipulate her for their own means…and both seem to care about her emotional being as well.

Then there are the two rooms of victimization – the United States citizen who brutally gets treated as a hostage and the oppressed third world person who chooses terrorism as an act of empowerment for their lives.  The issues explored here are complex and layered in ironies.  Ellen’s powerful monologue raises questions that examine both sides of the story.   Graphic photos of young boys holding guns are portrayed on the screen behind her as they exist in the impoverished third world country of Beirut.   “What is it to be an American?  It means to be comfortable. It means to be entitled.”  Then talking about the terrorist.

“He may be desperate or not, maybe this provides work, security, excitement…Thousands in the country hating Americans, willing to kill the most innocent of Americans…using our technology…they are born into the world with without power, without education, what, besides revolution, is their recourse for breaking free?”

The acting in Two Rooms reflects intelligence, precise rhythmic emotional connection between the characters, and draws the audience into the inner world of the four protagonists’ dilemmas.  Rob Mathes depiction of the suffering hostage, Michael Wells, rips at your heartstrings.  The rawness of his pain mixed with his innocent coping mechanisms to stay hopeful and alive, are delivered with a perfect ambiance of feeling.  Emily Mura-Smith, who plays his devoted wife Lainie, rides the wave of her agonizing obstacles with aplomb acting skills that underline her understanding of Lainie’s trials and victories. Stephanie Lesh-Farrell, who plays the government agent, Ellen, reveals a durable strength of character plus a glimmer of vulnerability that brilliantly reflects the hidden agenda of her own psyche…and Don Franklin’s performance of the tenacious journalist, Walker, abounds with compassion, strength, and determination to bring Walker’s ideals forward in a conflicted world.

The set design consists of a bare stage ingeniously decorated by a blood red carpet that is used to hold intimate conversations taking place between Lainie and Walker, Lainie and her husband, plus monologues.  Two adjacent walls are used to project poignant images that reflect the mood of the scene such as the deep blue calm of the ocean, the dark mysterious space of the universe, and the shocking images of terrorists and their victims.  Director, Deborah Kleinman pulled together a cohesive unit of actors to effectively tell a disturbing story; and creatively used a minimalistic setting in contrast to the rich and compelling themes of Two Rooms.

Don Franklin summarized why he loves acting.   “Best thing I love about acting… I never feel as alive as any other time.  I take on the circumstances of a fictional character to the hilt, and it’s exhilarating to abandon oneself.”

All the actors in Two Rooms did exactly that. 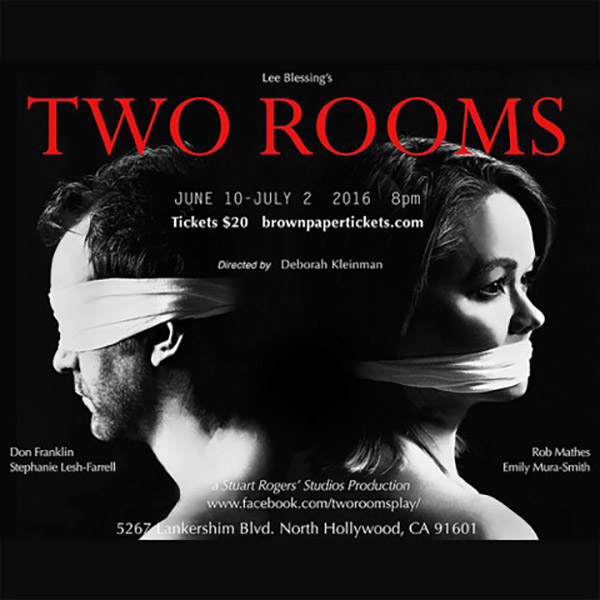 To buy your tickets for: