STX Entertainment releases the Official Soundtrack for The Edge of Seventeen today! The Soundtrack features new singles from The Struts and Birdy, as well as standout hits from notable artists like Phantogram, Miike Snow, The 1975, Santigold, and more. The Edge of Seventeen teamed up with Vogue last week to premiere Birdy’s “Ghost In The Wind”, which debuted on the heels of Consequence of Sound‘s exclusive listen for The Struts‘ cover of “Ballroom Blitz” earlier this month.The Official Soundtrack is now available for purchase via iTunes and Amazon. 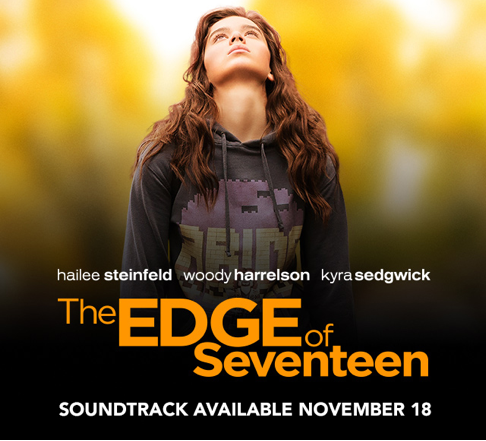 The Edge of Seventeen is a new coming-of-age movie in the vein of Sixteen Candles and The Breakfast Club – an honest, candid, often hilarious look at what it’s like to grow up as a young woman in today’s modern world.

Everyone knows that growing up is hard, and life is no easier for high school junior Nadine (Hailee Steinfeld), who is already at peak awkwardness when her all-star older brother Darian (Blake Jenner) starts dating her best friend Krista (Haley Lu Richardson). All at once, Nadine feels more alone than ever, until the unexpected friendship of a thoughtful boy (Hayden Szeto) gives her a glimmer of hope that things just might not be so terrible after all. The film also stars Kyra Sedgwick as Nadine’s well-meaning but completely ineffective mother, and Woody Harrelson as Nadine’s History teacher, mentor and reluctant sounding board.

The Edge of Seventeen marks the feature directorial debut of writer-director Kelly Fremon Craig, and is produced by Academy Award® winner James L. Brooks – the filmmaker behind big-screen, character-driven classics such as Terms of Endearment, Broadcast News, Big, Say Anything, The Simpsons, Jerry Maguire and As Good as It Gets.

Information on The Edge of Seventeen, please visit: www.stxmovies.com/theedgeofseventeen.

Listen to “Ghost In The Wind” by Birdy on Vogue, here: https://goo.gl/My3kmZ

Listen to “Ballroom Blitz” by The Struts on Consequence of Sound, here: https://goo.gl/LpCriw

Check out more on The Edge of Seventeen here:

01. Who I Thought You Were – Santigold

15. To Build a Home – The Cinematic Orchestra

STX Entertainment is a fully integrated, diversified, global media company designed from inception to unlock value from the 21st century’s changed media landscape. STX specializes in the development, production, marketing and distribution of talent-driven films, television, and digital media content, with a unique ability to maximize the impact of content across worldwide, multiplatform distribution channels, including unparalleled global capabilities and direct passage into the China market.

STX Entertainment is led by accomplished businessman Robert Simonds and was co-founded by Bill McGlashan, managing partner of the growth division of leading global private investment firm TPG, which has $70 billion of capital under management.  The Company’s Board of Directors includes prominent leaders in global finance and entertainment, including FrankBiondi, former President and CEO of Viacom, Inc. and former Chairman and CEO of Universal Studios; TonyVinciquerra, former Chairman and CEO of Fox Networks Group; Gigi Pritzker, CEO of Madison Wells Media; DavidBonderman, founding partner of TPG; John Zhao, CEO ofHonyCapital; and Dominic Ng, Chairman of East West Bank, among others.