The 13th annual Los Angeles Jewish Film Festival will begin on Wednesday, April 25, 2018  and conclude on Wednesday, May 2nd with films from around the world celebrating the Jewish experience. The opening night begins with a Bar Mitzvah or 13th year, style party and a tribute to Sammy Davis Jr. with the premiere of a new documentary SAMMY DAVIS JR. – I’VE GOTTA BE ME,(Documentary/USA/2018/100 minutes -Directed by Sam Pollard). 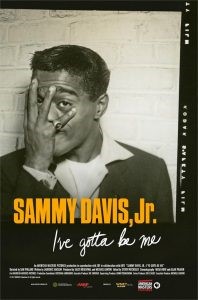 Sammy Davis Jr. was recognized as a groundbreaking entertainer who frequently found himself bracketed by the bigotry of white America and the distaste of black America.  He was the most public black figure to embrace Judaism, thereby yoking his identity to another persecuted minority. The festival will feature a red carpet opening night with celebrities and VIP’s including Sammy Davis’ closest friends such as George Schlatter (creator of “Laugh In”), Burt Boyar (Sammy Davis biographer), Manny Davis (Davis’ son), and Tom Dreesen (actor, Opening Act for Sammy Davis Jr. ) who will also attend the filmmaker Q&A  moderated by Stan Taffel, Sammy Davis Jr. archivist.

The highlights for this year’s festival include an Austrian Consulate tribute to filmmaker and founder of the Salzberg Festival, Jewish Émigré Max Reinhardt; a world premiere film event for The Samuel Project starring Hal Linden and Ryan Ochoa; a North American Premiere for the new Israeli TV series titled Commandments or Kipat Barzel in Hebrew with the talented writers attending the filmmaker Q&A.

There will be a fantastic closing night film that dives into a humorous look at aging with the very funny Carl Reiner documentary – If You’re Not in The Obit, Eat Breakfast with a Q&A including Alan Bergman, composer (Yentl, Tootsie), Director, Danny Gold and Producer, George Shapiro (Seinfeld).

The LAJFF is known for bringing a worldwide selection of new films with fascinating programs, major premieres, celebrities and VIPs.  Find the full list in more detail at http://www.lajfilmfest.org