On March 23rd, 2017 at the Centerstage in Burbank, Phil Perry joined an all-star cast of musicians preparing for the George Duke Tribute Concert taking place at the Berks Jazz Fest,  April 8th. 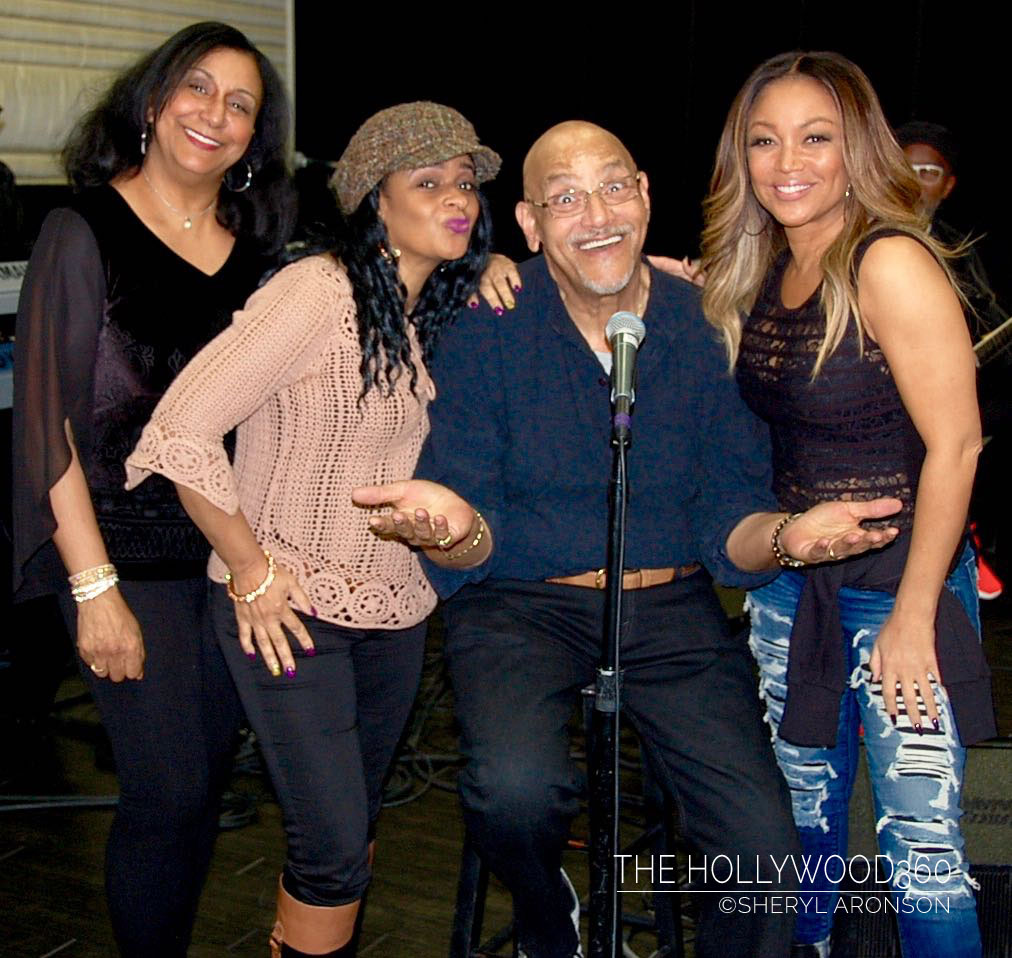 Chante Moore, looking gorgeous in a black sweater and stylish blue jeans, wiped tears from her eyes as she sung “As If We Never Met” one of the very first songs that George Duke did with her. 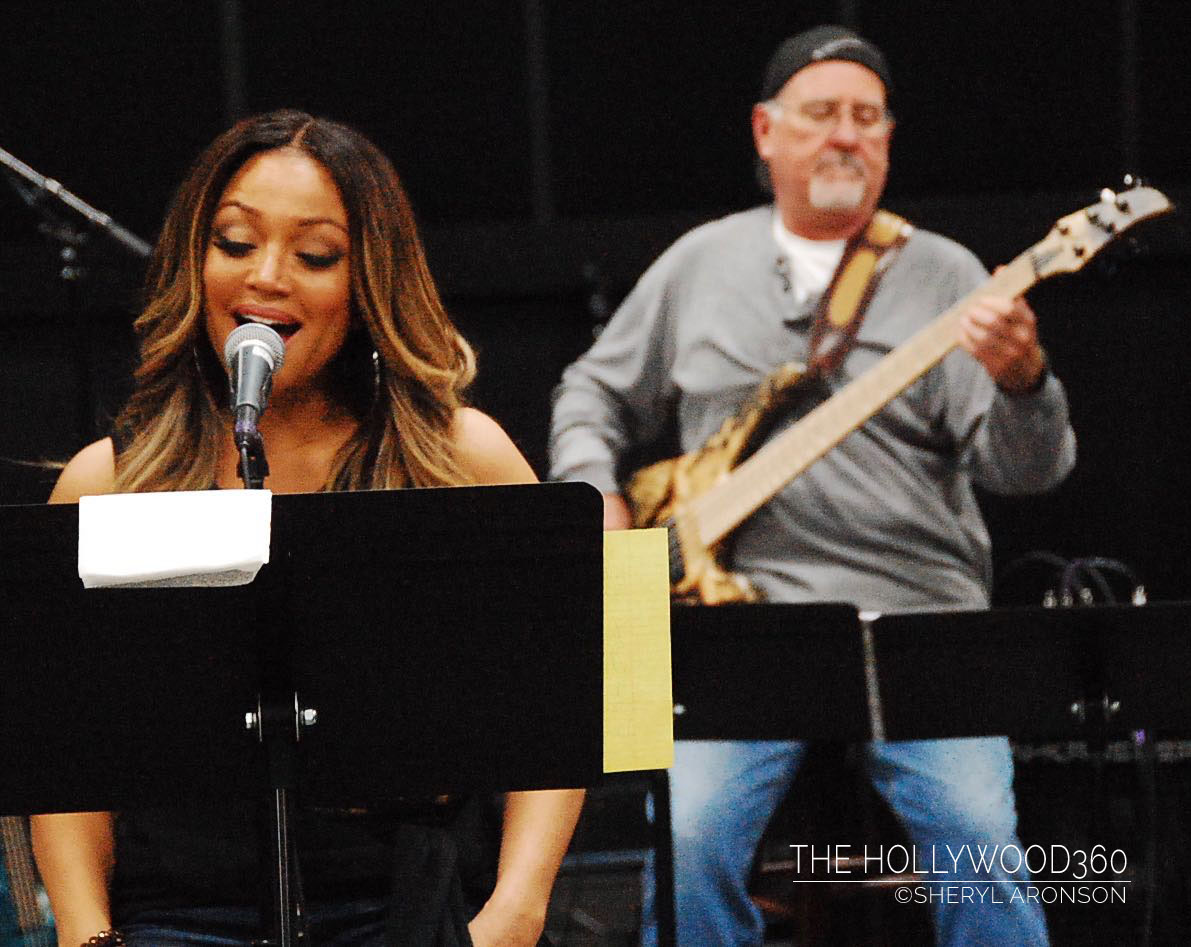 Phil Perry rushed over as he saw Chante getting emotional and whispered to her, “‘Don’t miss him here.  Don’t you feel him.  I get why you are crying but he’s here.  Sing it to him and forget about everybody else.’ 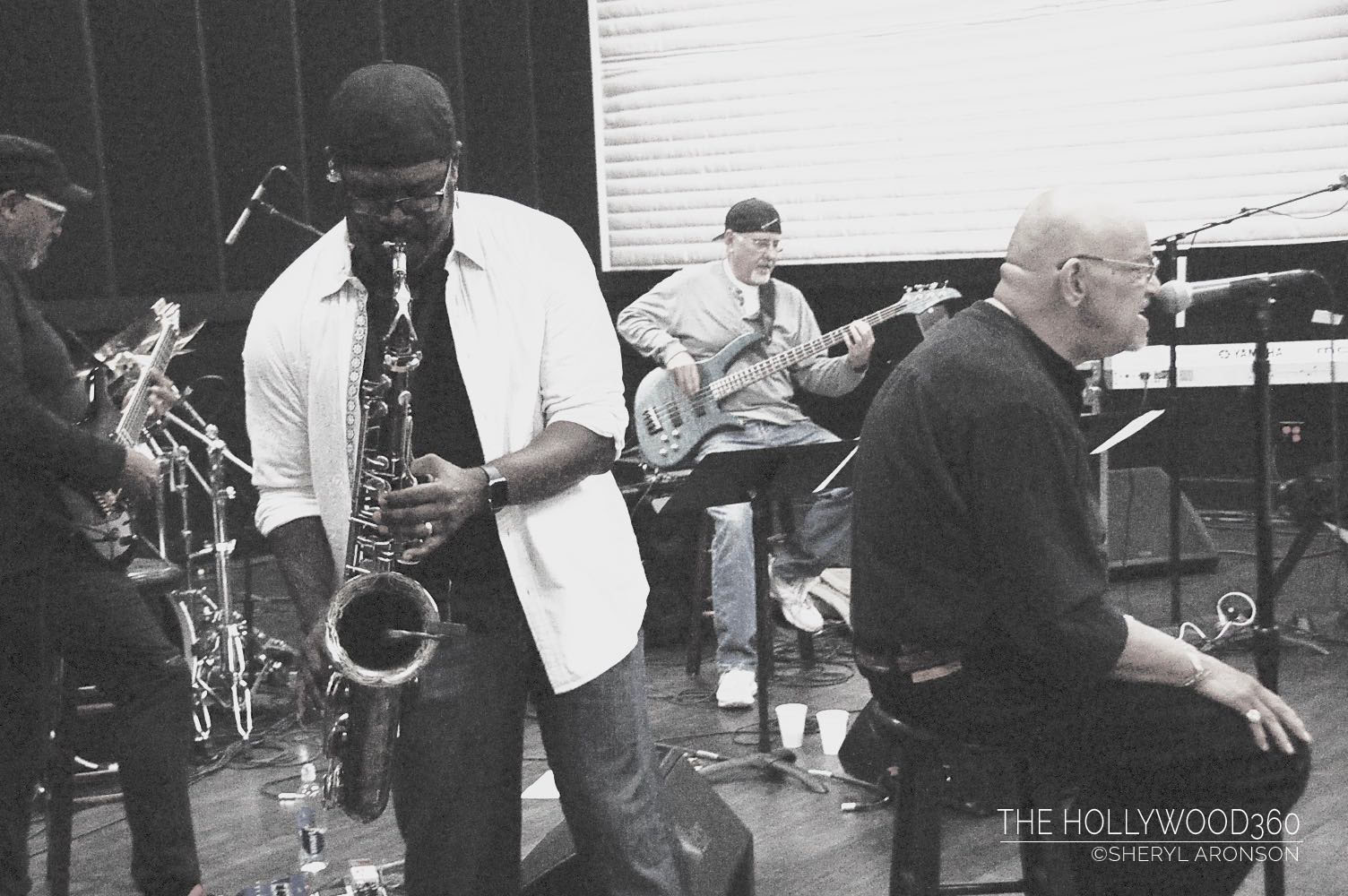 The entire afternoon was a stunning rendition of endearing love, dazzling performances, and mellifluous camaraderie.  It was an honor to witness these veteran musicians rehearse their repertoire for one of the most prolific and beloved producers of all time: Mr. George Duke. 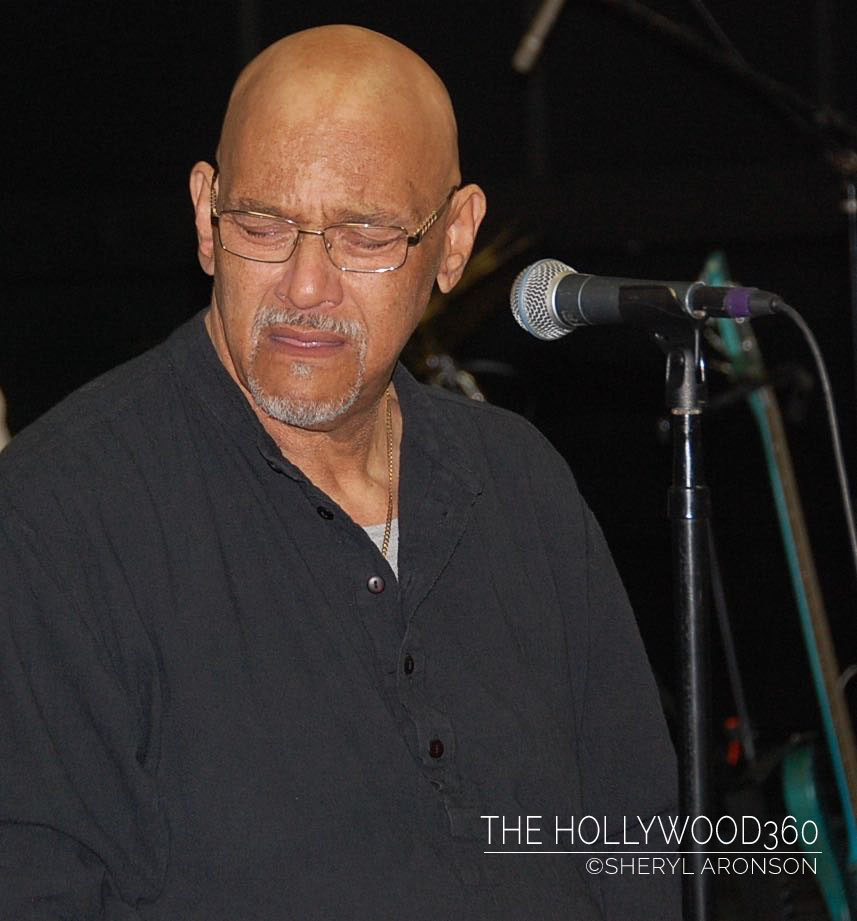 I sat down with Phil Perry to talk about his experiences with George Duke.

Phil Perry:  We will be doing a George Duke Tribute Concert at the Berks Jazz Festival in Reading, Pennsylvania.  The unique thing about this ensemble is that everyone has recorded with or has been recorded by George Duke.  We have a different a different sensitivity to his music. 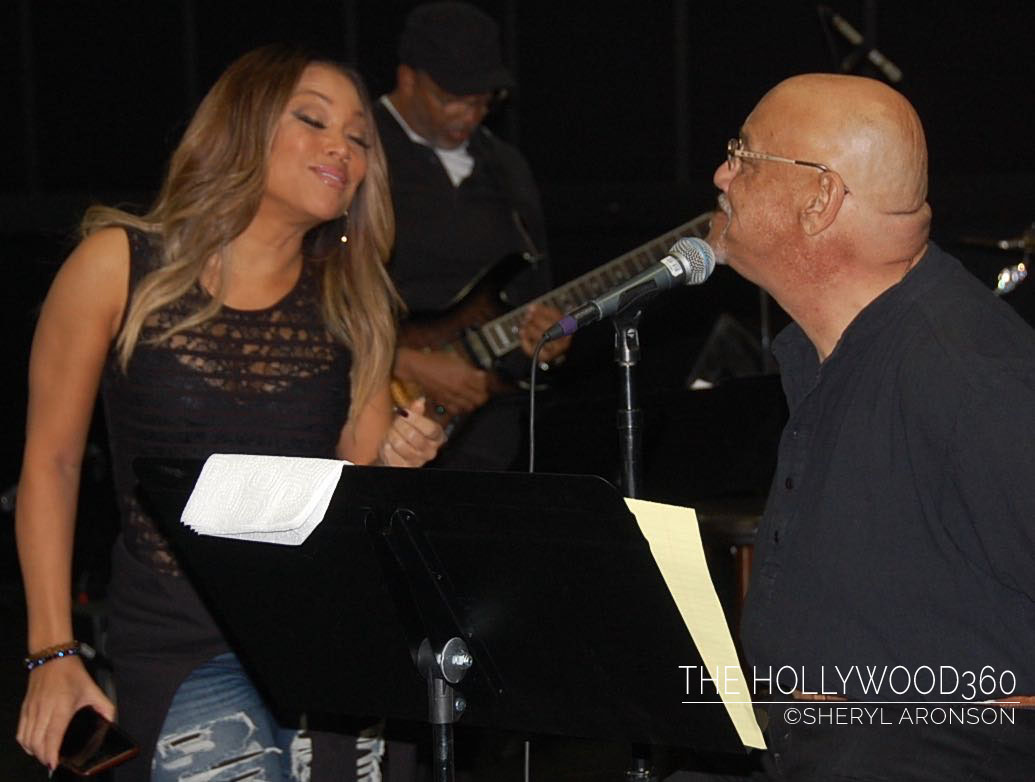 The Hollywood 360:  You and Chante Moore are singing together.  I couldn’t imagine a more glorious combination of vocalists.

Phil Perry:I tell her all the time how proud I am of her because this industry is so tough and she’s been able to maintain.  That’s not easy.

The Hollywood 360:  She was so emotional when singing before.

Phil Perry: Yes.  That was the first tune George Duke recorded on her.  It was a big hit.  You can’t have that kind of relationship with somebody and then they are gone… then do that type of music in their honor, and not remember what makes you want to honor the individual to begin with.  Sometimes that is a painful place.  The other side of the coin is the music that comes out of it is once in a lifetime.  The people in Reading, they have no idea what kind of music they’re going to hear on April 8th. 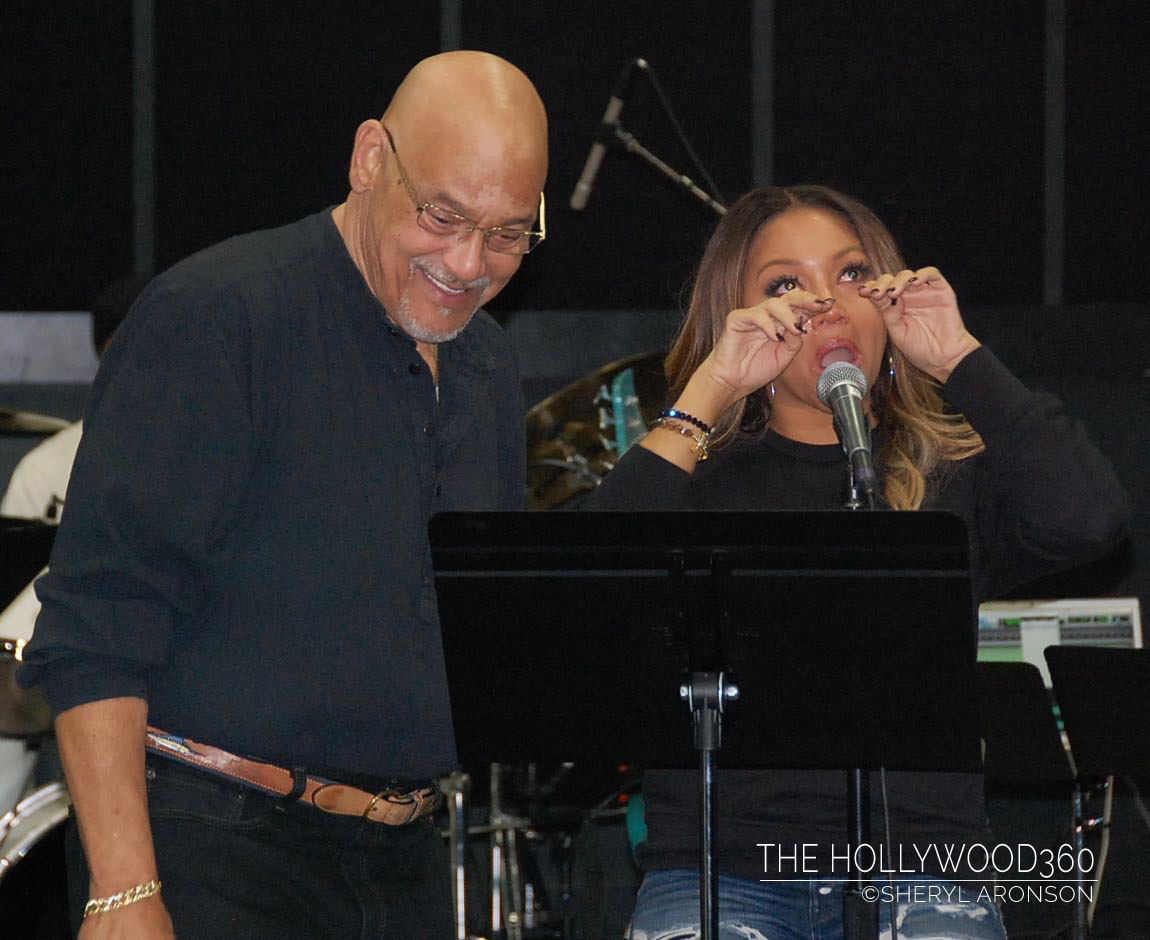 The Hollywood 360:  Talk about the song you were singing with Chante today.

Phil Perry: That was “Brazilian Love Affair.”  It was a big hit for George as a solo artist. You never had an experience with George Duke personally that you weren’t a better person, a more thoughtful person and a better musician for having undergone that work with him.  He was dauntingly infectious.

The Hollywood 360:  What was your experience with George Duke musically?

Phil Perry: He produced, “Call Me,” and he produced, “Love Don’t Love Nobody,” and “Born to Love You.”  “Born to Love You” is a composition of George’s.  I told him that I wanted to do it, and he said, ‘You want to do that one?’ And I said, ‘Yeah, but I want you to change the key.’  I could hear him thinking then he said, ‘Maybe you’d like to do it a half a step higher than I did it?’ I said, ‘We can start it in the original key, but when you change the key, you can go up a half step like you want.’ He said, ‘You sure?’ I said, ‘Yes.’ I cut one whole trac of the lead and one trac with punches and ad libs on it just to give him different texturing vocals around what the lead vocals were doing.  When I came into the studio, I was telling him I could do better.  He looked at me and said, ‘I don’t want to hear it, I don’t want to hear another note, and if you make me, I’m going to call Lilly and tell her, ‘Honey I’m sending Phil home now.’ George knew I am critical of myself on vocal days and he was telling me, YOU ARE JUST FINE. TAKE YOUR ASS HOME NOW.  YOU AREN’T GOING TO WORK ME TO DEATH. GO HOME. 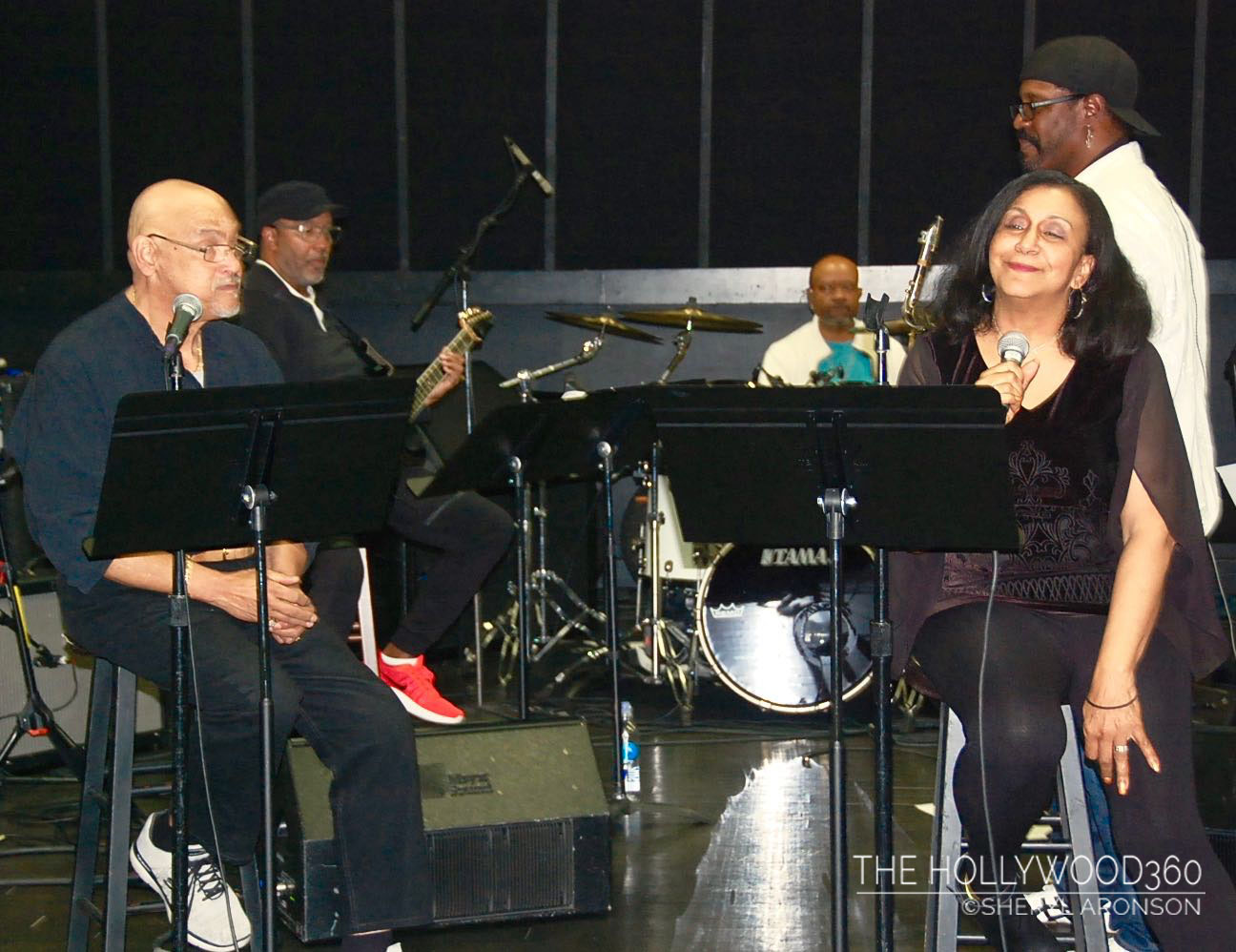 The Hollywood 360:  So this was a wonderful characteristic of George Duke as a Producer.

Phil Perry: He’s one of three producers in my life that made me do stuff I didn’t think I could do.

Phil Perry: Like being transparent enough as to wearing my heart on my sleeve in front of a microphone…only he, Quincy Jones and Burt Bacharach, were the ones that fall into that category.  Just being in the room with these producers made me want to be the best I could be.

The Hollywood 360:  What songs were you and Chante singing together?

Phil Perry: “Brazilian Love Affair” and “Geneva.”  (He starts singing) It’s a Carnival Samba because you can dance to it.  “Born to Love You” was recorded in the early 80’s and I didn’t do it until 1997.  We were singing “Sweet Baby” which was a big hit.  Our intention in this concert is to bring the wonderful legacy of music that he left behind… to perform it in front of people so they can see the magic he generated just from composing those pieces of music. 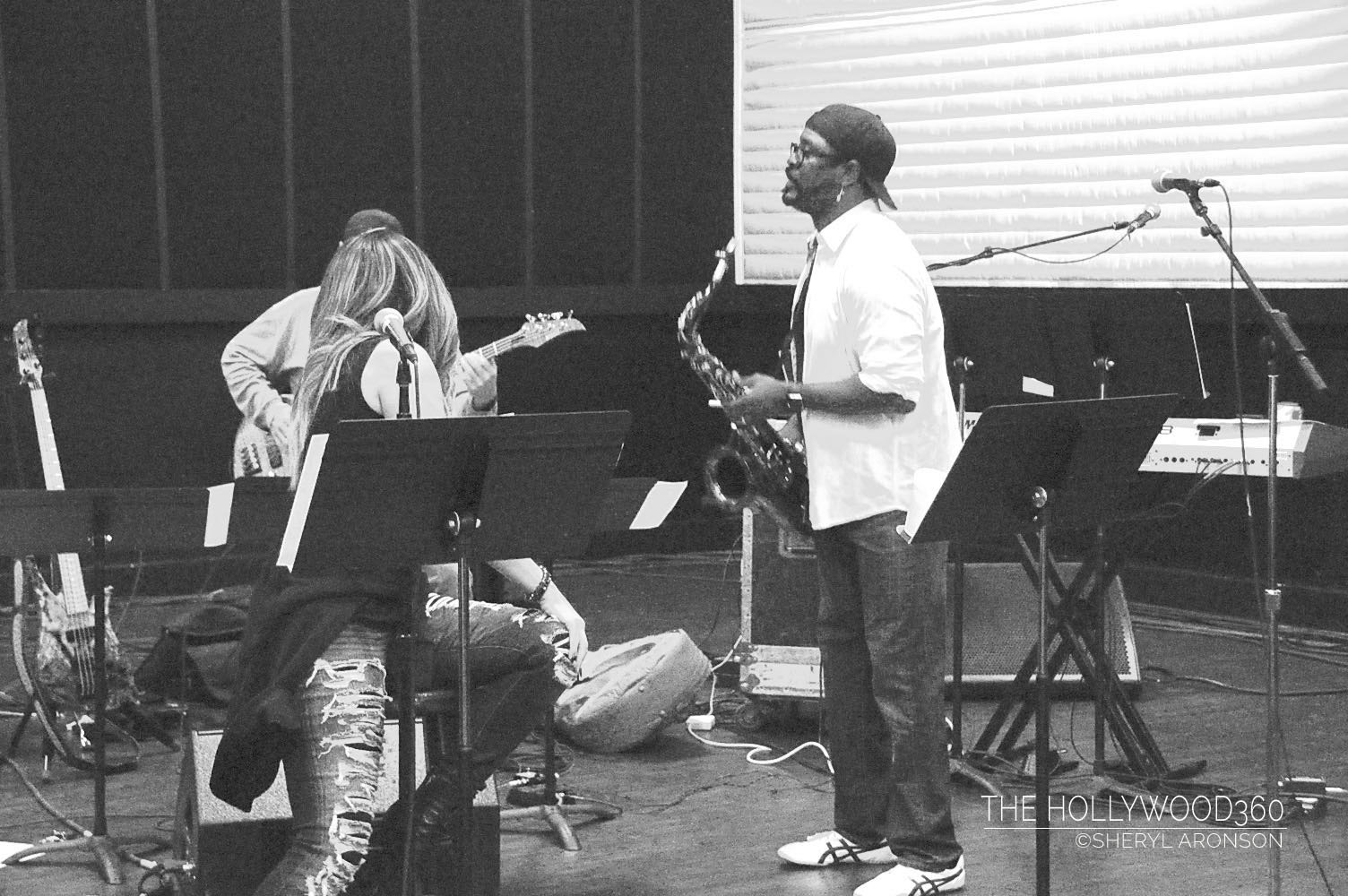 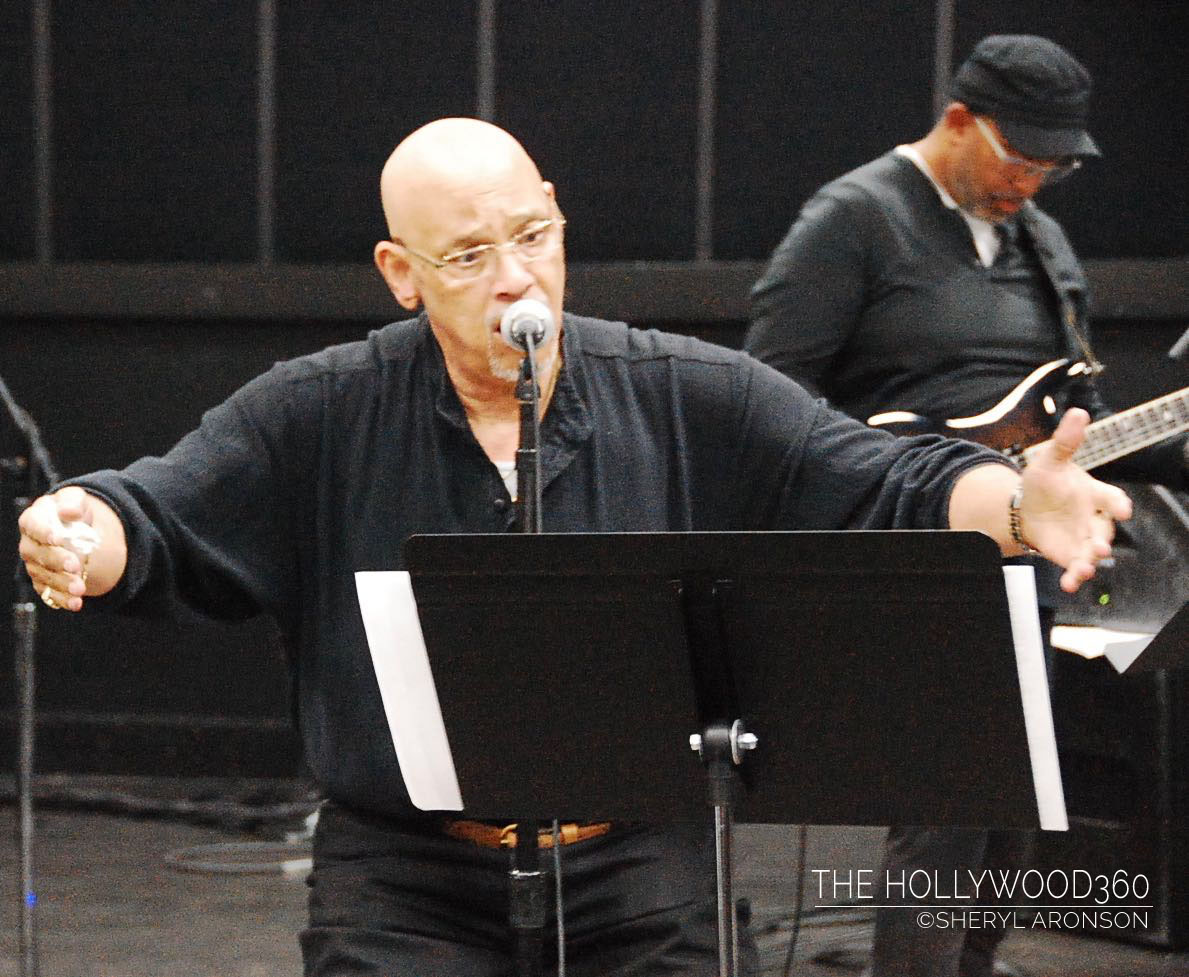 The Hollywood 360:  You can hear it the magic in the room as you rehearse.

Phil Perry: Chante had a hard time singing.  It was hard on her.  When I walked up and hugged her, she told me straight up, ‘It just makes me miss him that much more.’ I told her, ‘Don’t miss him here.  Don’t you feel him.  I get why you are crying but he’s here.  Sing it to him and forget about everybody else.’

The Hollywood 360:  She certainly sounded so dynamic today.

Phil Perry: I’ve never known her not to.  She has been one of the most consistent vocalists I’ve ever heard. In any genre of music, one of the joys of listening to music, is to listen to her.  I’m just waiting to hear her sing in a different language…she would slay me.  She certainly has the chops to do it. 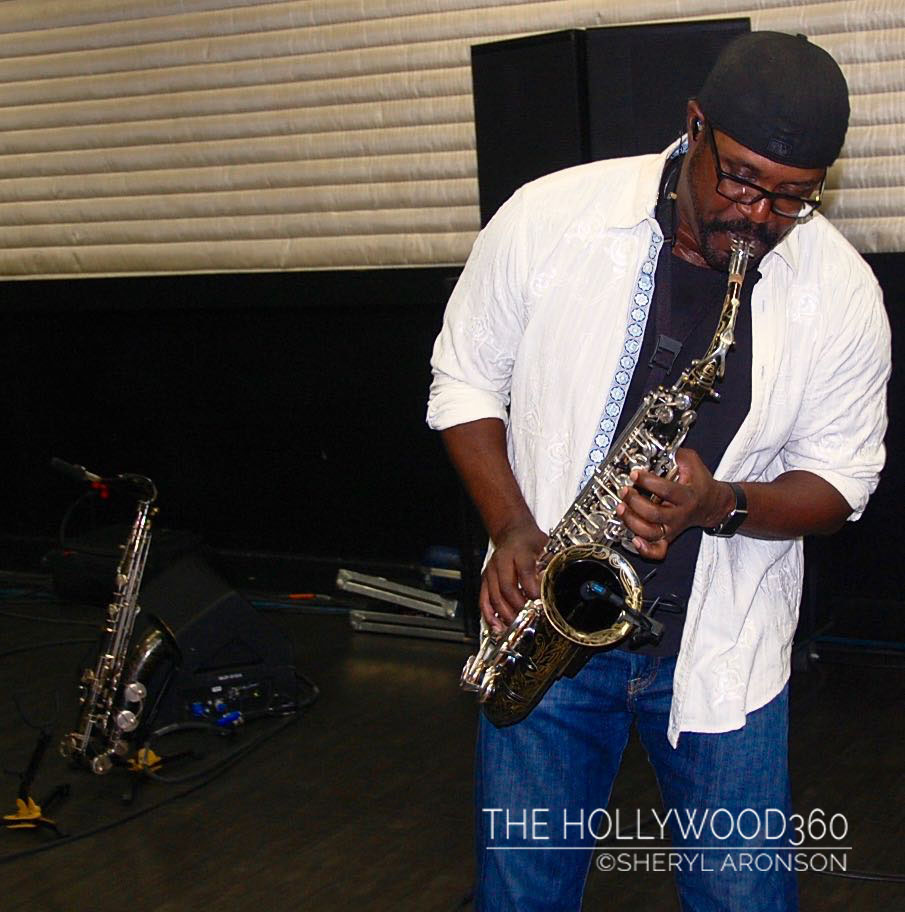 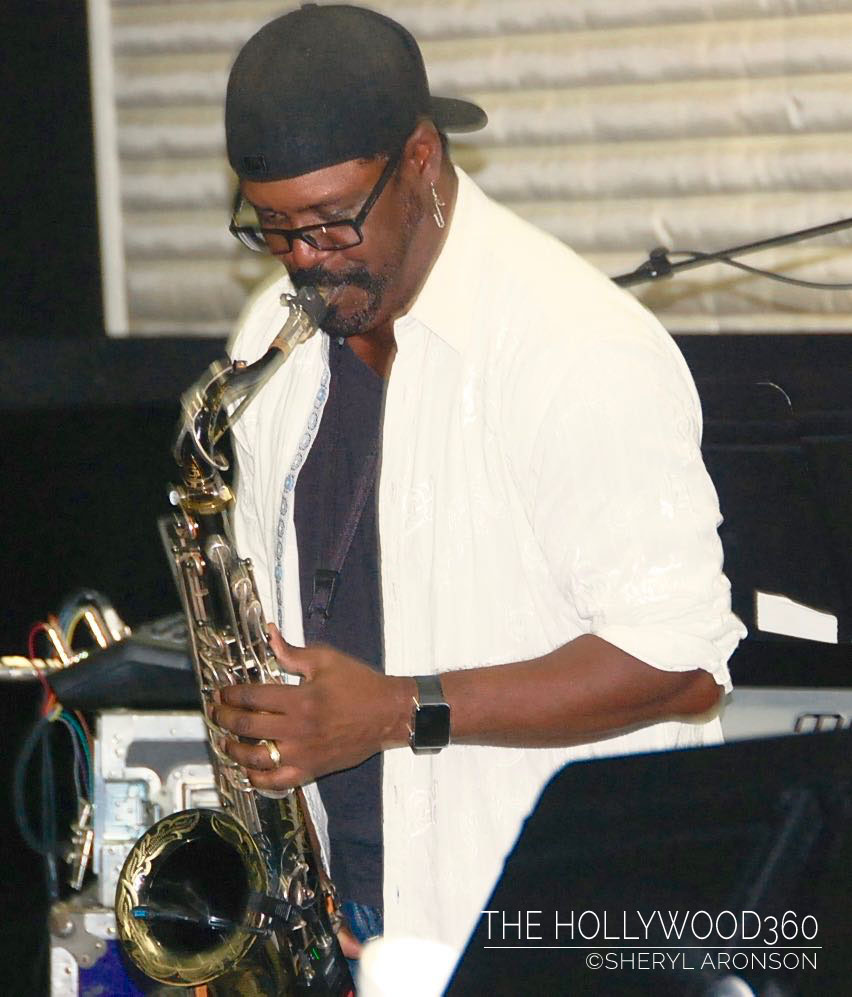 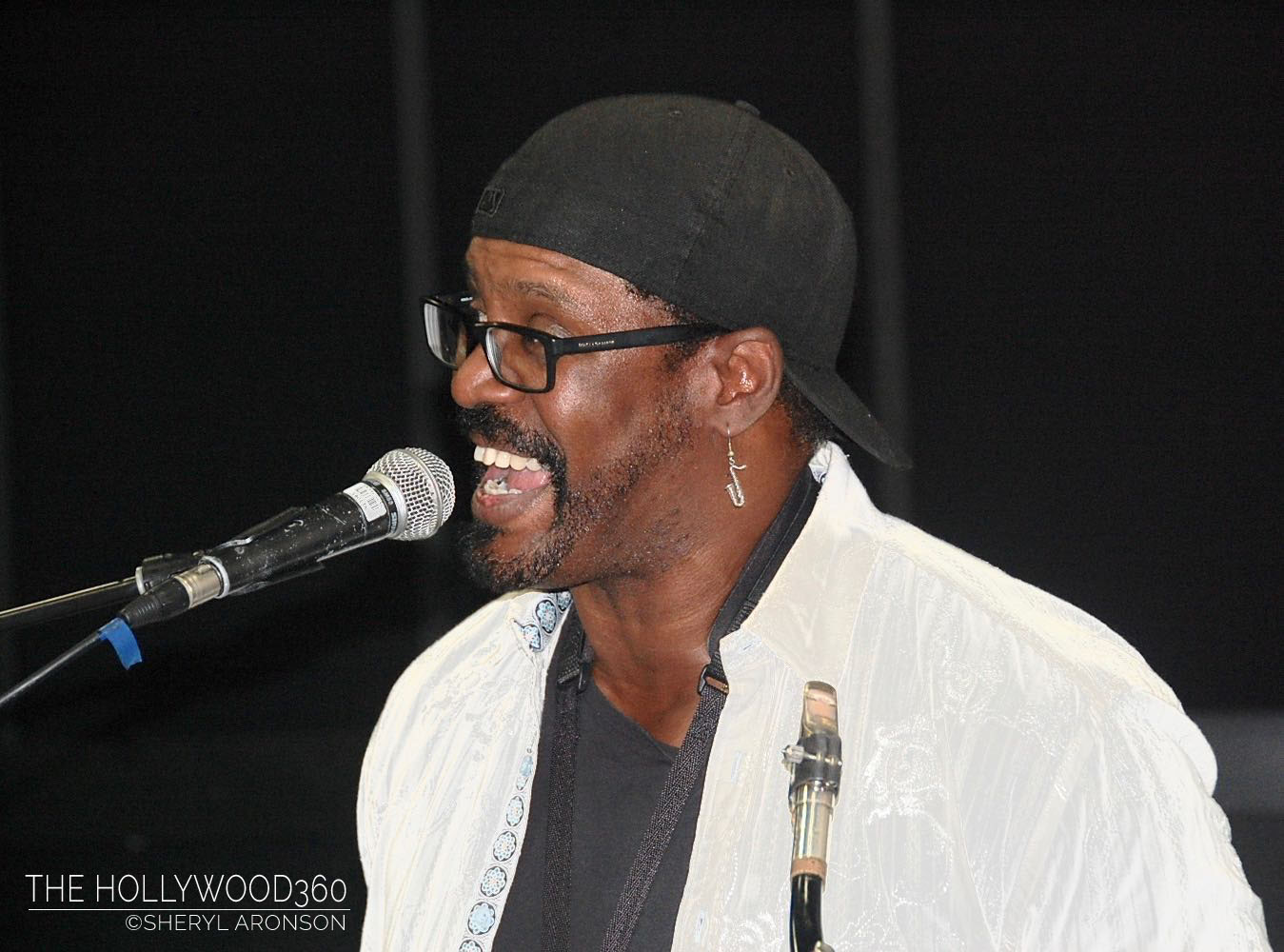 The Hollywood 360:  Talk about Everett Harp, who is the Musical Director of the concert.

Phil Perry: Everett played on a lot of stuff that George produced.  He also played sax solos on “Call Me,” “If Only You Knew,” “Love Don’t Love Nobody,” and he played the Ewi on “Born to Love You”. So all of the songs that George were responsible for in my career, Everett played on.  It was also hurting Everett too.  It’s a tough thing to love somebody enough to expose yourself to do their music and know they are gone, because at some point you not doing it for the people that are coming to hear the music, you are doing it for the person that is gone.

The Hollywood 360:  Is there anything else you would like to say?

Phil Perry:  I would ask everyone right now, when was there a piece of music that took their breath away?  If it’s been a while then check out my new CD, “Breathless.”

My version of “One Last Bell to Answer” is unique because you never heard it from a male perspective.  You will also hear my version of “Never Can Say Goodbye,” you will love “Some Day We Will Meet Again.”  They seem to find homes in a woman’s heart. 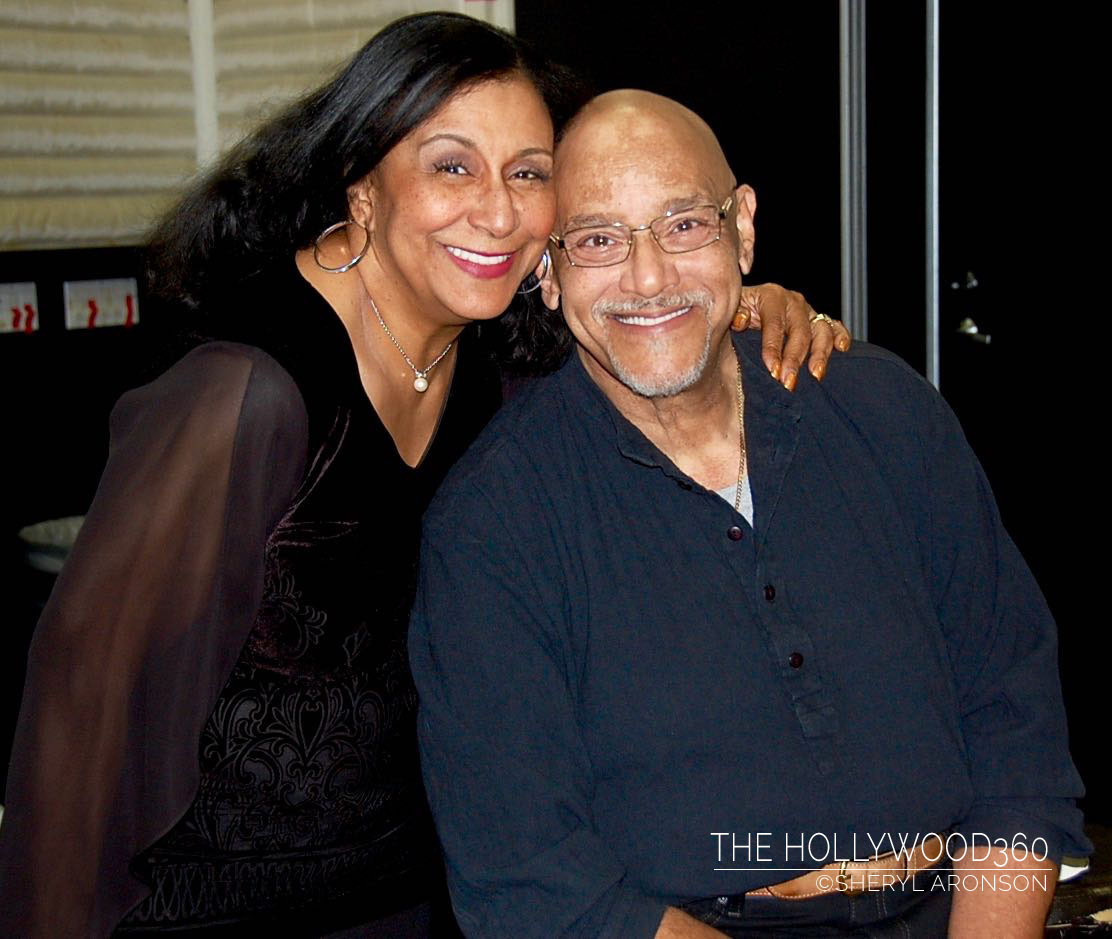 With that Phil Perry went back to finish rehearsing for the April 8th concert.  At the end of the day, Rashid Duke (George Duke’s son) came into rehearsal and everyone rushed up to give him a hug.  What better way to end this afternoon of tribute, of honor…  to “The Best of the Best.” (“Love and Soul” CD, Terri Lyne Carrington’s song honoring George Duke, Chante Moore vocals.)