I interviewed Cindy Shapiro, the co-creator/composer of Anais, The Dance Opera, and when I asked her about the musical styles used in writing the orchestrations and songs, she replied, “ It’s really varied. It depended on what the scene required. Some of it is like alternative rock. Some of it is like vintage. We have a Charleston piece,  another piece is [in the style of] Django Reinhardt. It’s not one particular style, but it is all me . . . my particular way of thinking about music.”

Throughout the entire production of Anais, A Dance Opera the Eternal Anais holds the mic in her hand and belts out the lyrics of each number, giving the piece the feeling of a rock concert.  Quite effective and innovative.

Here are my impressions of some of the outstanding musical compositions written by Cindy Shapiro.

“My Body is Mine” –  This is the opening number drawing the audience into the internal life of Anais Nin.  The minor chords set the tone of the tumultuous world of this artist.  There’s an exquisite violin solo echoing an eerie, haunting, melody then the strings pump the beat… the lyric ends on an open floating feel then drones out into the universe, reflecting that her life was full of secrets.  A lovely bridge provides a refrain… of a glimmer of hope…. an uplift of spirit.  Anais screams out, “My body is mine!”…  a loud and bold statement of Anais claiming herself as a woman, as an artist. The whole number captures the unique personality of this complex female artist and foreshadows the story.

“Cold Cold Night” – The elements of this musical number lays down the mood for a haunting background of emptiness.  The layering of minor chords is exquisite … the piano echoing the silent suffering… vocals deliver the cries of a young girl aching for acceptance and connection. The cello reverberates a rich sonorous cry, yet also echoes a hollow pain.  Anais aches for the love of her father and the music poignantly expresses the hurt.

“Hugh” – The meeting of her first husband is a musical composition with a layering of voices floating… pulling upwards yet tinged with minor chords that signal a downward feel at the same time.   The notes ride along with a hopeful richness then the vocals lift upward…the horns give a sense of warmth even in a discordant sound, heard subtly in the background.

“Little Innocent Girl” – This is my favorite number. (As I am a jazz lover.) The song bursts out with the rhythmic, bopping beat of the jazzy sound from the Charleston era. The lyrics are sarcastic, biting and ironic. The piece leaps and lures…  so much fun… A catchy chorus sings again and again, “I’m an innocent, innocent girl…”  The entire number reaches a climatic high- kick ending, which reflects the happy endings of musicals. 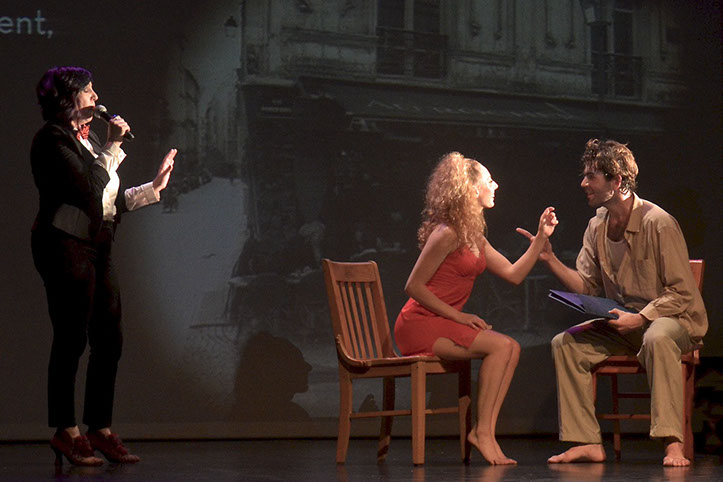 “To the Edge” – Here, Anais meets Henry Miller for the first time and has a lurid affair with the writer for many years.  The composition rocks strongly with the licks on the guitar and driving beat.  Shapiro punctuates the edginess of Anais’s relationship with the writer with a rap-like chorus… “So bold… so dark”… Anais  reveals, “He  takes me to the edge…I’m not afraid.”  We hear the bold and direct locution of a confident woman exclaiming her inner passions.

“Don’t Think Twice” – Cindy Shapiro displays her mastery of alt-rock with the mixture of EDM.  The electronic voices penetrate the airwaves with the repetitive encouragement…” Don’t think twice…as Anais gives herself permission to explore an affair with Henry Miller.

“Henry” – There are soft rhythmic percussive beats in the background to begin the number then the piece rocks out with a straight ahead thorny cry… the underlining beat rushes …toward something…small quick steps…faster and faster moving toward the passionate and fast love of Henry…”take me now…Henry…now.”

“Alive” – The piece begins with a piano phrase then it is brought in by a cello…water sounds invade the background…a gorgeous layering of piano and water sounds build  with drum beat…cello and piano plummeting as Anais is singing: “my eyes were dead…but now I’m alive”… she is rejoicing at being seen…a beautiful piano lyrical bridge…”you saw my soul…my soul was dead”… twisting the lines then the music opens to a happier feel, yet still maintains a discordant under mixing.

“Café Culture” – A commentary on the high society in 30’s.  It slows down to an um..pa.pa storytelling saga… “I’m just a woman in a man’s world…” then breaks out into an Eastern European mix with the chorus… “café culture” ringing out in mockery.

“Lie Box” –This composition has echoes of Gracie Slick and the Jefferson Airplane’s “Go Ask Alice.”   The music floats then spins out of control, conjuring Anais falling down the rabbit hole of all her lies.

The music to Anais, A Dance Opera is simply stunning and complex.  It matches the intricacy and multi-dimensional layering of Anais Nin’s inner and outer life.

Fantasy & Reality Collide in FRAMED: THE ADVENTURES OF ZION MAN