Larry Dunn, an original member of Earth, Wind & Fire, 7 time Grammy Winner, Inductee of the Rock and Roll Hall of Fame and the Songwriter’s Hall of Fame attained one more honor in his illustrious career. On November 28, 2017 Larry was inducted into his home state of Colorado’s Music Hall of Fame along with the talented Artists Philip Bailey, Andrew Woolfolk, Diane Reeves, Bill Frisell, and Ron Miles. The Ceremony took place at the Paramount Theater in Denver. 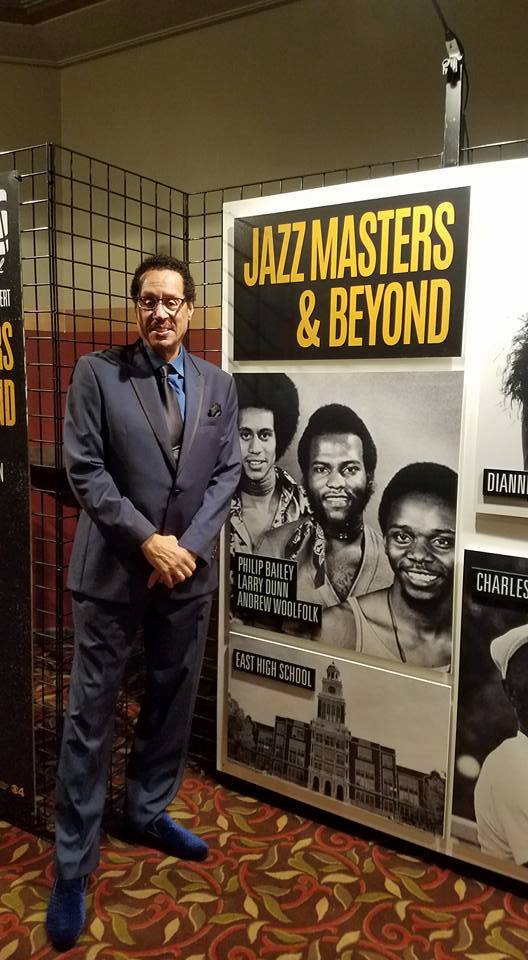 When I get an award like this, it is very humbling because when you do something you love and put a smile on other people’s faces, is such a blessing.  What a gift.  I am so honored. Larry Dunn commented recently in our Facebook Live interview.

He continued by saying, If you find something you enjoy doing, put your heart into it and you work hard, then use integrity and love, perhaps at the end of the day you will have a roof over your head and something to show for all your efforts.

Larry’s original story of growing up in Denver and becoming a musician was revealed in our Facebook Live interview on November 20th.  His mother was Italian and his father was an Afro-American. He said that in 1950, it was against the law for his parents to get married in the state of Colorado.  This forced the couple to go over to the state of New Mexico to become husband and wife. The first two years of his life were on a farm with his Nana and Poppa, his parents, and his brother.

At two years old, we moved to suburbia and ironically enough, like I said, it was against the law for them to get married, but the neighborhood I was raised in was gorgeous.  We had all nationalities, we had Blacks, we had Hispanics, we had Asians. There was a beautiful white woman across the street that I was able to take three years of classical piano from. 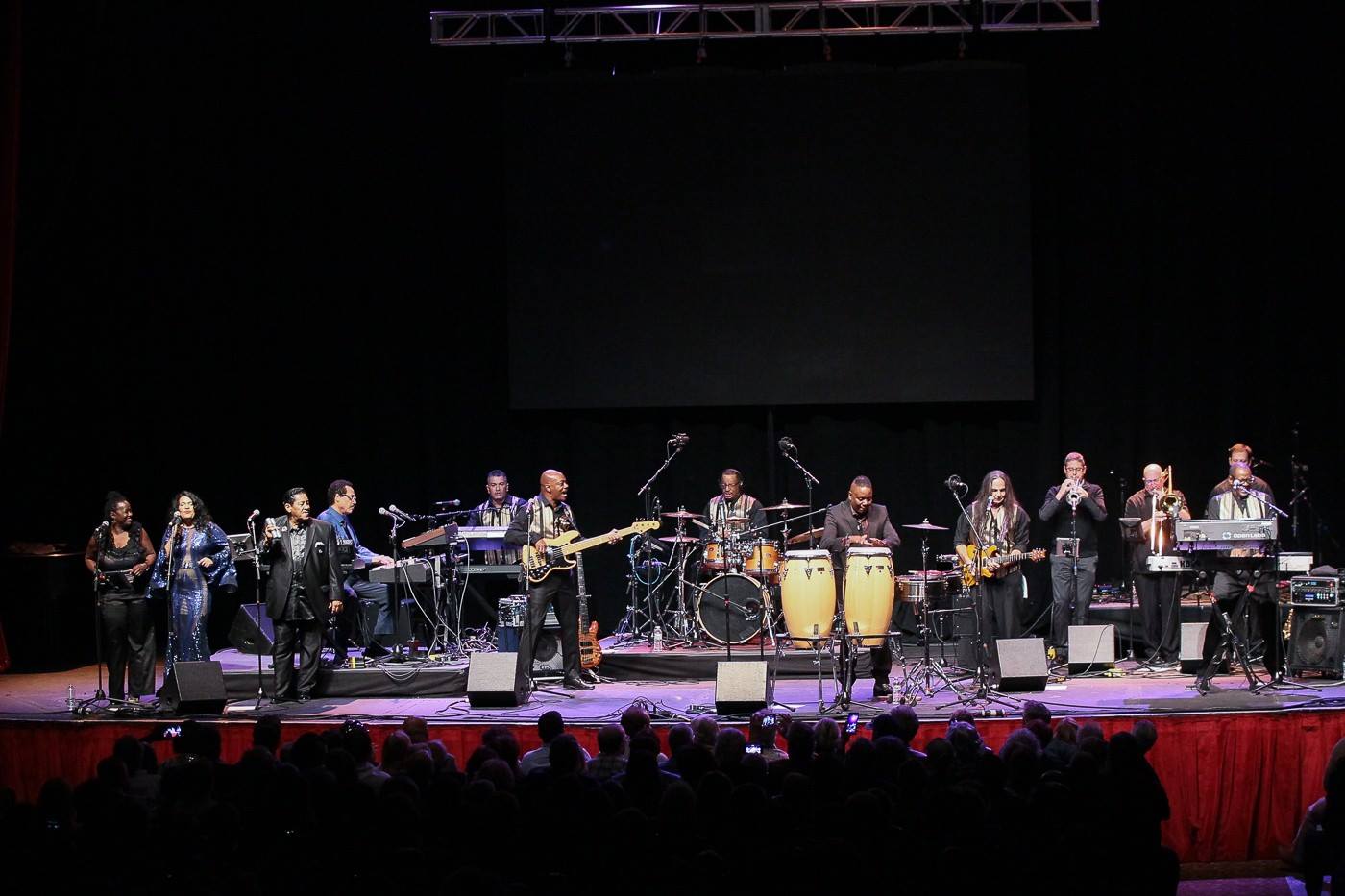 There was a raggedy upright piano in the Dunn’s living room and Larry started beating on it.  His father was a musician who played upright bass, guitar and piano. Larry said, I was drawn to that raggedy piano like a moth to the light. On his Mother’s side of the family Larry recalled going to the other side of town where his Italian family played guitars and sang Italian songs.  I was always surrounded by music.

When Larry Dunn was around 4 years old, his father taught him Blueberry Hill by Fats Domino and in 4th grade he got a guitar.  He was now learning the Beatles songs and Ray Charles music.  He and his two brothers had a band called the Big D Three.  We won a talent show at the Casino Ball Room on the 5 points in downtown Denver, which was a famous place that great Artists played at like Duke Ellington.  Their group came in third place, got their photo in the newspaper and they won twelve dollars.

Larry was hooked. The fact I actually got money in my hand doing something that I loved, I told myself, “This is it! This is what I want to do for my career.” He was only in the fourth grade. 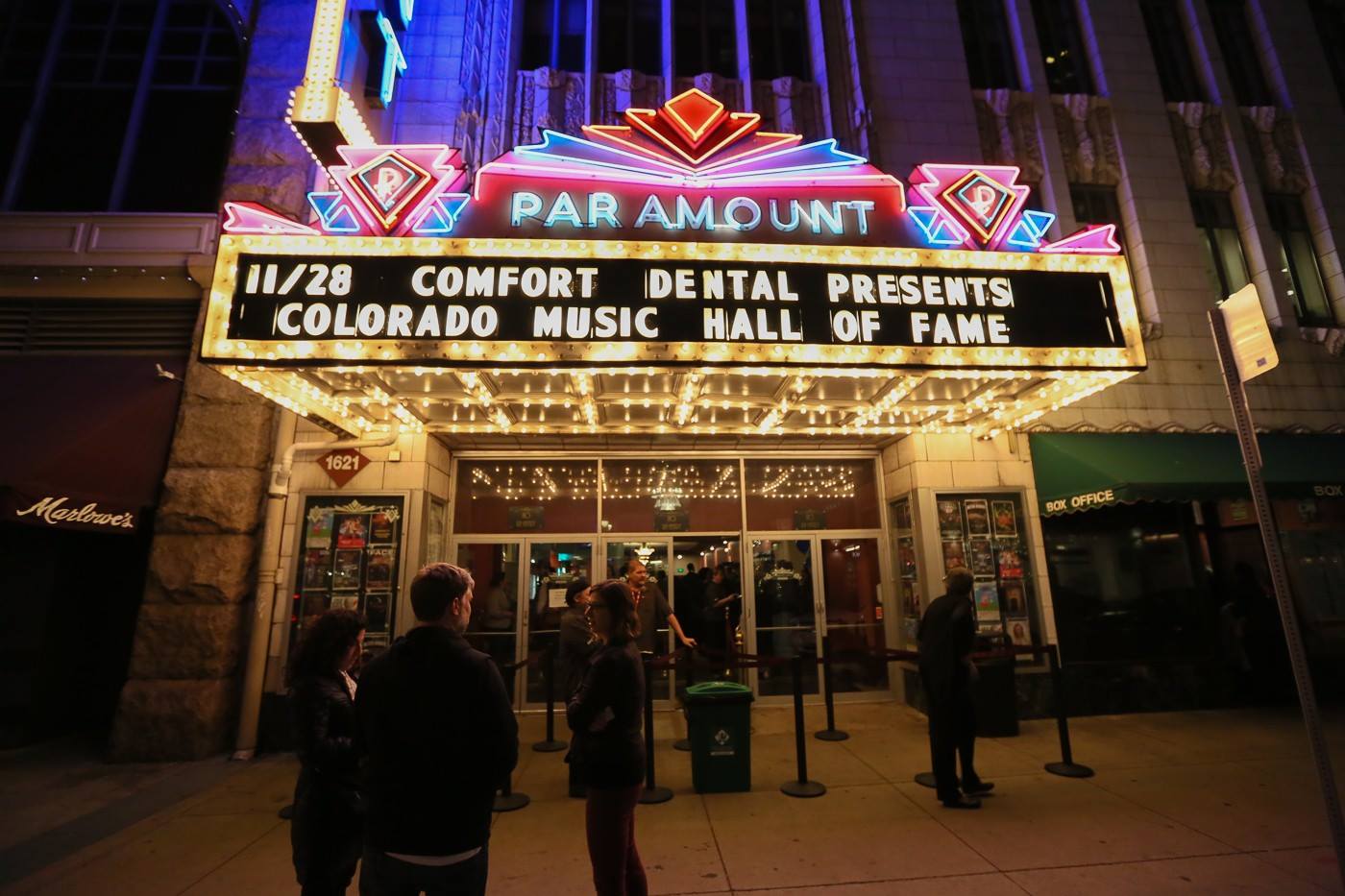 In fifth grade he wanted to be in the school band. The day the school was giving out the loaner instruments, Larry was home sick.  The next day when he went back to school, the only instrument left was the baritone horn. It was like a miniature tuba.  It was a blessing because its job was to play the beautiful secondary melodies, Larry proceeded to tell the story of how he ran into a fan in 1974 when Larry had been playing with Earth, Wind & Fire, and that young person told him how playing the baritone horn had influenced Larry’s composing abilities. He told me that my studying the baritone horn, because it is used to play these gorgeous secondary melodies, had contributed to my music sensibilities. His comments enlightened me to what I had been doing when I was composing and developing my sound.

In 6th grade Larry received a Kimmell organ for Christmas.  His parents knew he was very serious about playing music. My Mom used to say, ˜We never have to make Larry practice, we have to make him stop so he can go to bed, Larry confessed that receiving the organ was a life changing moment.  The young musician would take his father’s record collections like Jimmy Smith and other jazz artists and his mother’s Sinatra and James Brown records then turn the turn- table down half speed to listen to the jazz riffs. I did it ghetto style to develop my chops. 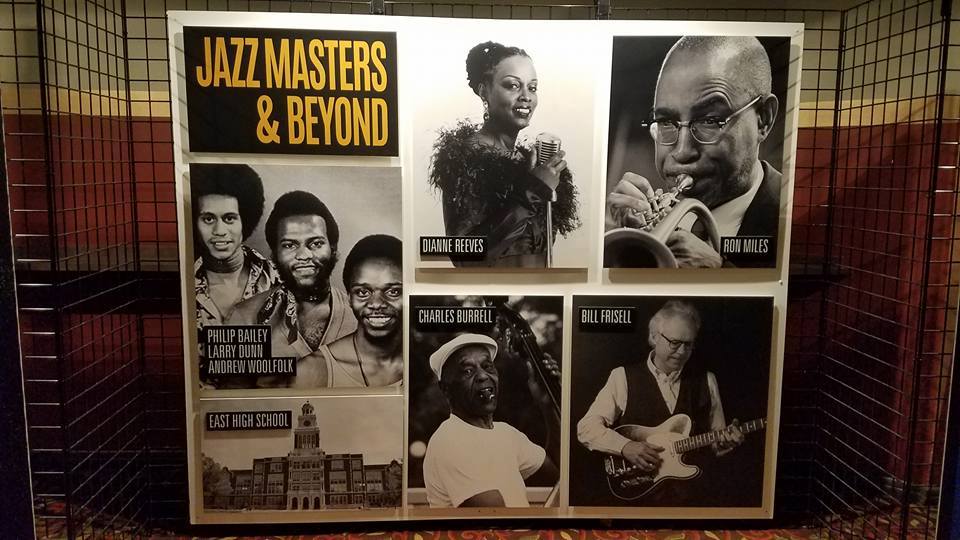 At eleven years old, Larry and Hilliard Wilson, thirteen years old, had a band together. They had a tenor and alto sax player, keyboards, drums and guitar.  They were playing music like Hugh Masekela’s Grazing in the Grass.  It was at this time that Larry Dunn met Philip Bailey for the first time. He remembered that his group had gone to a warehouse where they let kids listen to music and dance on the weekends. There was a band that had three singers sitting on stools and Larry said, They were doing a song by Curtis Mayfield, In the Shadows. Then they would break into a three -part harmony.  One of those singers was Phillip Bailey.  Larry’s band then snatched up those three singers and now they were instrumental and vocals.  By the time Larry was 15, Larry’s mother allowed him to play in night clubs for 21 and over, seven nights a week.  Philip Bailey was the lead singer and Andrew Woolfolk played the guitar.

We would rehearse during the day.  Intricate stuff, like we would learn Promises, Promises by Dionne Warwick, with different time signature changes. Groups like the Whisperers would come through Denver and ask people,˜Who are these young boys? They would ask how we were playing like adults.”  Larry commented.

The momentous first meeting with Maurice and Verdine White happened when Larry was around sixteen years old.  Larry told the story:

We opened the show for Maurice White when he had the first Earth, Wind & Fire group with Verdine, the older guys from Chicago and Sherry Scott as the vocalist. Â We knew their stuff, so we were excited.  We opened the show for them in the afternoon at the Hilton Hotel, and later that night we had to play at the 21 and over nightclub. So Maurice and Verdine came down to check us out.  Shortly after that, they broke up, our band broke up and Philip went out to LA and became the musical director for a Gospel Group.  He came back to Denver one time to visit. Â I was playing with a bar band. We opened a show at Emmanuel High School for the group, War. I played like a 10 minute Hammond B-3 solo.  Philip went to the pay phone after hearing me do this and called Maurice White to tell him, â€˜I think we might have the guy who can really play and is a nice guy; however, he doesn’t have a lot of experience. (Larry added, I had been playing in night clubs since I was 11 so I really did have a lot of experience).  After that call, I had to learn all of the tunes off of Earth, Wind & Fire’s two albums.  Then, I flew out to LA to audition for Earth, White & Fire. 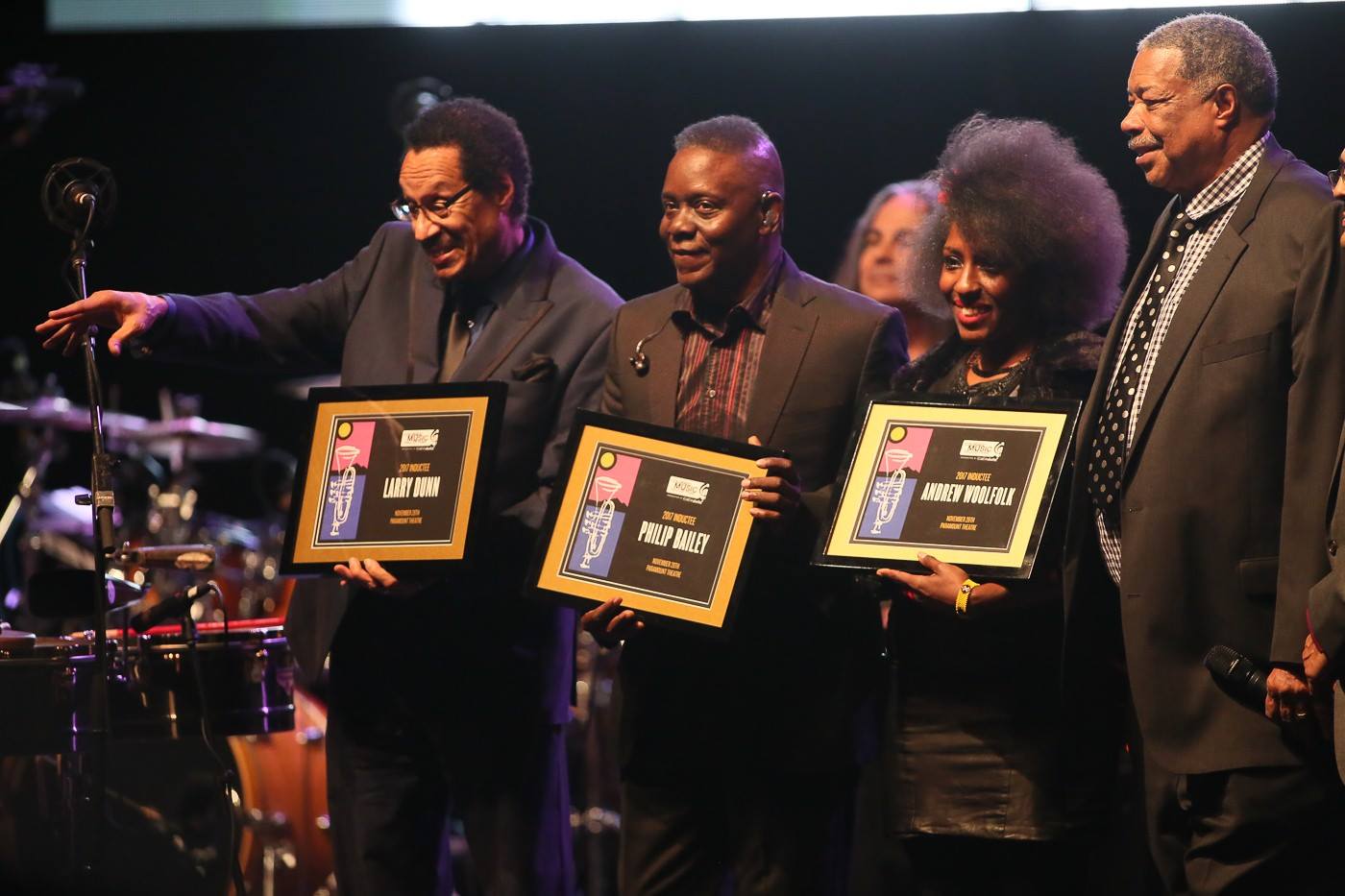 I went over to Maurice’s house near Tower Records.  I had a Fender Rhodes Stage model and I played a couple of Earth, Wind & Fire songs with them and then I broke into a little of Herbie Hancock’s “Maiden Voyage” to show them I could play a little jazz. And the rest, as they say, is history.

With Larry’s signature sound on the keyboards, he helped transform Earth, Wind & Fire into one of the most successful R&B bands in the world with sales of more than 100 million albums worldwide. He has 7 Grammys (just received the Lifetime Achievement Award in 2016), 4 American Music Awards, 32 Gold & Platinum/Multi-Platinum Records & Albums, a star on Hollywood’s Walk of Fame, and the induction into the Rock and Roll Hall of Fame and the Songwriter’s Hall of Fame.  His production and performance credits also include working with some of the world’s greatest Jazz Artists such as Ramsey Lewis, Hubert Laws, Stanley Turrentine, Diane Reeves, Stanley Clarke, and many more.

I have had the privilege of seeing Larry Dunn perform five times in the last few years.  Here are some of my descriptions of his unique sound that explodes from his fingertips

My listening ears were gearing up to hear one of the Masters titillate the keys with his beguiling dexterity, while vamping the electronic sounds with his out of this world, celestial handiwork.

Soon Larry Dunn was back in position and tackled those keys with ferocious yet jaunty liveliness.  Watching his fingers fly like Olympic sprinters â€¦ripping out riffs of pure improvisational genius, caused me to enter another musical dimension.  With eyes closed, face turned upward as in a trance, Larry Dunn then ended his musings with a soulful free for all which skyrocketed upwards into the galaxies,

Larry Dunn and his dazzling, super charged Anthology of Earth, Wind, & Fire band took us to church.  They testified with their funk filled crackling rhythms, belly gripping vocals and heavenly harmonies, soul snapping horn blowing, and the magical celestial finger frolicking from the King of those keys, Larry Dunn.  From the first note to the last, the crowd roared with love and excitement as they were lambasted, wave after wave of the beloved hit songs from Earth, Wind & Fire. The surge of soulful sound never ceased . The music is still reverberating inside of me.

The Hollywood 360 would like to congratulate Mr. Larry Dunn on being inducted into the Colorado Music Hall of Fame. An honor well deserved. 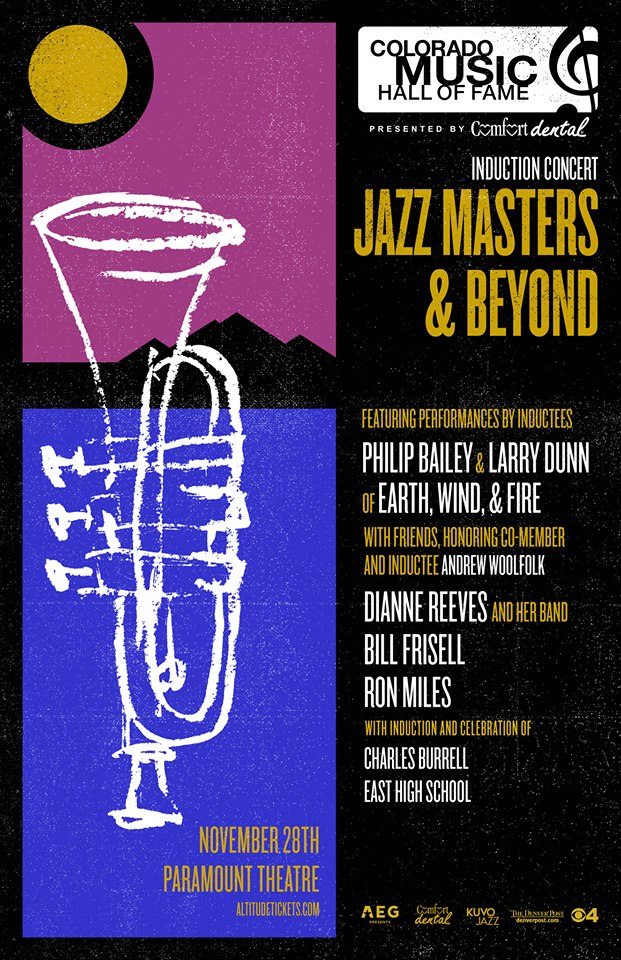 Please join us on December 3rd when Larry Dunn’s Anthology of Earth, Wind & Fire hits the stage at The Rose in Pasadena.  You can still buy tickets for the concert at this link or by calling The Rose at: 888-645-5006

For more information on Larry Dunn go to: http://www.larrydunnmusic.com/