John Patrick Shanley’s Twofer “Danny And The Deep Blue Sea,” And “Poison” Make For An Intense Night Of Theater At @Theater68 In NoHo!

By Michele Black and Dawn Deines 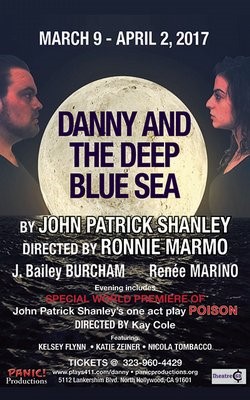 Artistic Director of the 68 Cent Crew Theaters and Director Ronnie Marmo shared this about his own decision to play Danny 8 years ago in L.A during the 13 by Shanley Festival. “I walked around with the “Danny and the Deep Blue Sea” script in my back pocket for 10 years before I felt remotely qualified enough to play Danny; the material is so dense, not something to mess around with” … “I am extremely excited to revisit Danny and the Deep Blue Sea as director…Seeing the material from this point of view had made me fall in love with the play even more. Our production is extremely powerful and affecting- these are authentic characters and Renee and Bailey will be leaving it all on the stage at every performance.”

Tonight, Marmo takes on the task of bringing John Patrick Shanley’s dark, psychologically disturbing play to North Hollywood, and bring it he did. Marmo’s casting of Renee Marino and J. Bailey Burcham as Roberta and Danny respectively is spot on. The two play the whacked out, train wrecked souls to perfection. Marino and Burcham find themselves unwittingly starring in a modern, twisted “Beauty and the Beast” set in a seedy bar instead of an enchanted castle. The tremendous acting chops it takes for these two attractive, charismatic, easy going actors to turn themselves into people so raw and ugly is exceptional. The sheer amount of energy it takes night after night is draining. They give 110% wringing themselves out on the stage for their audience in the way only great actors can. Marino had this to say about playing Roberta in her first professional play; “I’ve done plays before, but in college, never professionally. Danny and the Deep Blue Sea is my first professional play. Playing Roberta is one of the most rewarding experiences I ever had. It’s been so satisfying. I leave feeling emotionally exhausted, but I love every minute of it. “

It is gut wrenchingly emotional within 10 minutes of the play’s opening scene.  You’re looking around the audience for a psychiatrist in the hopes that they’ll call a 5150-psychiatric hold on these two. The first scene opens on a sparsely furnished bar set, clearly a dive. Roberta is sitting legs apart, sprawled in one of the chairs, beer in hand, eating pretzels with the scariest resting bitch face imaginable that screams, “Don’t mess with me.” Danny, keeping it classy in his dirty wife beater, greasy hair, blackened eye, bloodied hands and carrying a pitcher of beer and a mug enters a few minutes later and sits at the table across from Roberta. Already my thoughts run to how I’d never want to meet either of these two loose screws in a dark alley.

Couple that thought with the intimacy of Theater68 whose stage is less than 3 feet from the theater’s front row, and the audience has an “in your face” view of quite possibly the most damaged people you will ever come across. The theater’s intimate design invites the audience to step into the character’s deepest despair. Occupying that space between madness and redemption causes one to feel as if they have over stepped boundaries right into Roberta and Danny’s circle of pain, hopelessness, venomous anger and ultimate redemption. It is uncomfortable, almost too personal, and too raw of an experience to digest in such a small space and span of time.

Marmo no stranger to Danny and the Deep Blue Sea directs Marino and Burcham’s broken and battered Roberta and Danny with the skill of someone who has walked the dark side of this play; beginning by setting us up with Shanley’s self-destructive characters that collide with each other with the intensity of a perfect storm. The excellent direction and acting guarantees turning away is not an option, though one may at times desire to do so!

These are truly broken and nasty characters, raw, bitter, and filled with hatred, anger and rage at the circumstances in their lives. Roberta a 31 yr old divorced, single mother with a jacked up 13 yr old son both live with her parents and she loathes it. She heads to the local dive bar in her neighborhood seeking some peace of mind from her own screaming thoughts. Burcham when asked to describe Danny had this to say “He’s a gorilla, he’s a brute, and he’s dangerous, he’s a poet …. And he’s vulnerable.”  29 yr old Danny who looks older than his years is fresh from a street brawl arrives at the bar, bruised, bloodied and weary from the turmoil in his life hoping to find solace from the rage for just one night.

From there on a ping – pong match of words laced in deep pain and rejection lead these two perfect strangers to unburden themselves on one another in the hopes of receiving forgiveness, acceptance, and redemption from their painful pasts.

Burcham (Damn Yankees, The Producers) and Marino (Jersey Boys the film, Damn Yankees) are fiery, repulsive and endearing as Danny and Roberta. These two play off each other with such intensity that the audience is left gasping, and then holding its breath, unable to jump in to help, unable to look away from the chaos in front of them.  In one terrifying scene, so close is the audience to the stage that they can see the sweat on Danny’s brow and hear Roberta whisper “harder,” as she stares death in the face.

A sob is heard from the audience as the reality of being thrust into the very vortex of these two desperate, shredded people is too much to grasp. Roberta begins to crack open, a desire to ease Danny’s pain and not just her own emerges. She begins to veer toward a more temporary release wielding the only weapon she has against a man who towers over her; her beauty, her body.  In desperation, she begs Danny to come home with her and to “pretend” for just one night that they see the light in each other, rather than the darkness. 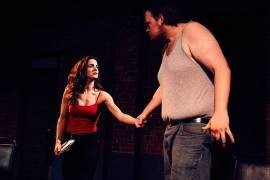 Alone in Roberta’s room they begin to settle into the idea that they can have what others have. Roberta telling Danny that he’s not a beast and “Why can’t we have one night? I need to step away from myself just for one night.”  Danny grabs Roberta’s bride doll off the shelf and begins to question her about it. He tells her that he went to a wedding once.  “I wanted to be the bride, all dressed in white, flowers, and people talking nice, special. Yeah special.  I wanted to be the bride.” Not because he was conflicted, but because for once he wanted others to look on him as special, attractive. Danny’s vulnerability begins to come through and Roberta begins to open up to him. Slowly at first than like a flower, petal by delicate petal opens as she tells Danny,

“Let’s be romantic with each other Danny.”  Danny resists at first, but then with these simple ineloquent words, “You got a nice nose…it’s like, it looks at ya, your nose, and says “hello”.  And you got a nice chin too. It goes up when you smile. Like a balloon. No better, like a bird! Yeah, like some kind of bird.”

His words flow over her soul like a healing balm, telling her he loves her “friendly ears” and her nose that says “HELLO!”  They become vulnerable with each other in a sweet halting way.  Roberta becoming endearing as we see her through Danny’s eyes.  Danny becomes more like a teddy bear than a beast with his silly words and his adorable grin, “sexy hair,” and “beautiful eyes” as we begin to see him through Roberta’s eye. Danny proposes and she accepts. They fall asleep in each other’s arms and wake up to the sound of birds outside of Roberta’s window.

Having been given a taste of the beauty, peace and normalcy he has always craved, Danny has now found something worth fighting for. In a desperate attempt to help Roberta forgive herself, he offers her the very thing she needs for her stained and tattered soul…forgiveness. Roberta is offered the ultimate gift by Danny. All she has to do is receive it.  Will she?  Can she?  Come see the play and find out! Bring the Kleenex! Lastly, this production is not for the faint of heart, and absolutely not for a younger audience. Keep the kiddies at home unless you want them to end up in therapy! It is that disturbing.

John Patrick Shanley’s 15-minute play Poison makes its world premier under the direction of Kay Cole at Theater68. This one act play stars Italian actor Nicola Tombacco as (Kenny), Kelsey Flynn as his desperate girlfriend (Kelly,) and Katie Zeiner as a con artist, gypsy fortune teller. Zeiner is out to make a buck at Kelly’s expense. Kelly is obsessed with getting Kenny her ex boyfriend back, and she’s willing to spare no expense at insuring that she regains his love. Zeiner’s hilariously played gypsy fortune teller is more than happy to assist Kelly by selling her a poison that should do the trick! Emphasis on trick here!  Shanley’s Poison presents before Danny and the Deep Blue Sea.