On April 9th, 7pm, Ralph Dudley will be hitting Spaghettini with his hot, sizzling new sound…SoulLatino.  After working diligently for over a year in the studio with some of the greatest Latino musicians and producers, Ralph Dudley is ready to launch his new CD, SoulLatino,  in affiliation with Robert E. Johnson’s Soul Records. A ten-piece band will explode the stage that night with music that combines a R&B feel with the titillating rhythms of Latin Clahvay, refreshed by a splash of some jazzy flavors.

I sat down with Ralph Dudley to talk about his newest project, SoulLatino.   He had just announced that he had signed with Robert E. Johnson’s, Soul Records to release the single, “Women of Beauty,” off his SoulLatino album.

The Hollywood 360: Please tell us about this new sound that you have created with SoulLatino. You’re combining R&B with the Latin rhythms.

Ralph Dudley: SoulLatino is blend of R&B, rock, Latin, Soul which blends into my concept, a perfect recipe to convey to my listening audience a very dynamic sound.

The Hollywood 360:  You have mentioned that you want to bridge a gap between the listening audience of Soul music and Latin music.

Ralph Dudley: Singing in English and Soul music are both in my background, so I want to bridge the gap of my identity…if I sing in English with Latin rhythms that I am very passionate about…I feel I can reach people who would be turned off by someone just singing in Spanish.

The Hollywood 360:  You are singing a bit in Spanish which gives it that authenticity and you told me that the Latin musicians in your band made you study and research the Latin style of music.

Ralph Dudley: Yes. They made me learn Clahvay and made me learn some of the history of some of the Latin Artists before me.  I studied these guys and being a former drummer and having a rhythmic background, I was able to understand the theory.  They wouldn’t let me sing until they felt I understood the music.

The Hollywood 360: What is the musical term Clahvay mean?

Ralph Dudley: (He starts snapping his fingers.)  It’s a rhythm in a lot of the Latin and Salsa music.  If you’re singing in Clahvay, it has this excitement and a never ending pulsation of Latin rhythms that tie in.  I threw my R&B genre in that Clahvay trying to create something very unique.

The Hollywood 360:  I think it was wonderful that the musicians made you honor the traditions of their music to bring in this new future sound.

Ralph Dudley:  I wanted to take the Latin music and embrace it and take the chance of making it my own, making it something very powerful, conveying it to people to bridge those different ethnicities.  And more importantly, when I sing in English, I am opening the door for my R&B listeners to be exposed to Latin music.

The Hollywood 360:  How are you blending everything in your own unique way?

Ralph Dudley:  I think back to the Godfather of Soul, James Brown.  You will notice there are areas in my SoulLatino Music that I reference James Brown.  The Afro rhythms and beats are fused into that Latin/Afro-Cuban genre.  I think in my time, Earth,Wind,&Fire, I think of Marvin Gaye, I think of Al Green and all the great artists that influenced me as a vocalist.  But these rhythms of the Latin/Afro-Cuban really takes me to another place.  It makes my writing different.

The Hollywood 360:  Let’s talk about some of your songs.  You just signed with Soul Records and they are going to distribute a song of yours.

Ralph Dudley: The song is called “Women of Beauty,” and it’s a tribute to women worldwide… the goodness that they bring, without women, they would be no us.  I am honoring the beauty of women, inside and out.  I have another song called, “She Brings Me Joy,” which speaks of the goodness of the woman and how there is a woman behind every good man.  I also wrote a song called, “My Mother” which is not Latin, but again, a tribute to women.

The Hollywood 360: Talk about the song “SoulLatino” which is the name of your new CD.

Ralph Dudley:  “SoulLatino” is close to my heart because it began my writing for this genre of music.  It’s a R&B/Latin/ a bit of a Rap.  The music becomes…My Lady.  It’s my inspiration so I speak in those terms.

The Hollywood 360:  You are going to take all of this and bring it to Spaghettini on April 9th.  Let’s talk about some of the musicians that recorded on your CD, “SoulLatino.”

Ralph Dudley:  There’s Sandy Stein, who is an amazing Latin Producer.  He will play keys and be the Musical Director at Spaghettini.    I am currently working with Kenny O’Brien who is a Grammy winning Latin Producer.  He’s been inspiring me on all my projects now.  Here is my lineup for my CD Release Party: Eddie Resto/bass, Mike McGuffy/trumpet, Ramon Flores/trumpet,  Poppo Rodriguez/ Bongo, Joey De Leon/Conga, Gener/ Timbales, Francisco Torres/ trombone, and Leonardo Lunas/ trombone.

These guys have validated me being in this music and giving me a score card that told me I could, ‘GO!’  I wouldn’t have been able to have moved forward without having this validation of these true Latin Legends.  Having these guys giving me a stamp of approval, elevated my confidence.

The Hollywood 360:  April 9th, Spaghettini…it will be a wonderful night of music.

Ralph Dudley:  We’re looking forward to having a packed house.  We encourage everyone to make a reservation because we expect to sell out.  I am very excited to launch “SoulLatino” on the Soul Records label.

Join Ralph Dudley and his smoking band. April 9th,, at Spaghettini. They will pour out some hot spicy melodies for your listening ears. 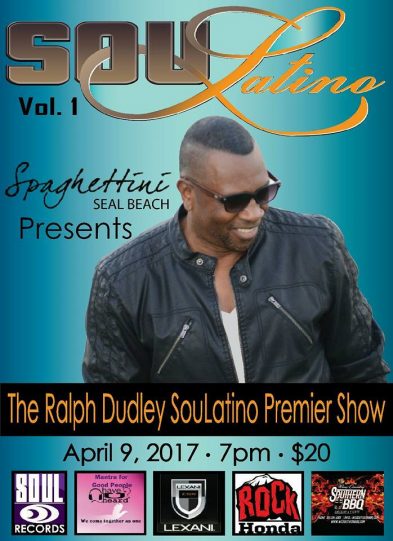 John Patrick Shanley’s Twofer “Danny And The Deep Blue Sea,” And “Poison” Make For An Intense Night Of Theater At @Theater68 In NoHo!