On Saturday, October 7th, Charles R. Drew University held the Jazz at Drew Festival.  This year’s concert was headlined by Grammy award-winning band Earth, Wind & Fire and Sheila E.  The other stellar groups were DW3, The West Coast Get Down, Eloise Laws, and The Fernando Pullum Band. 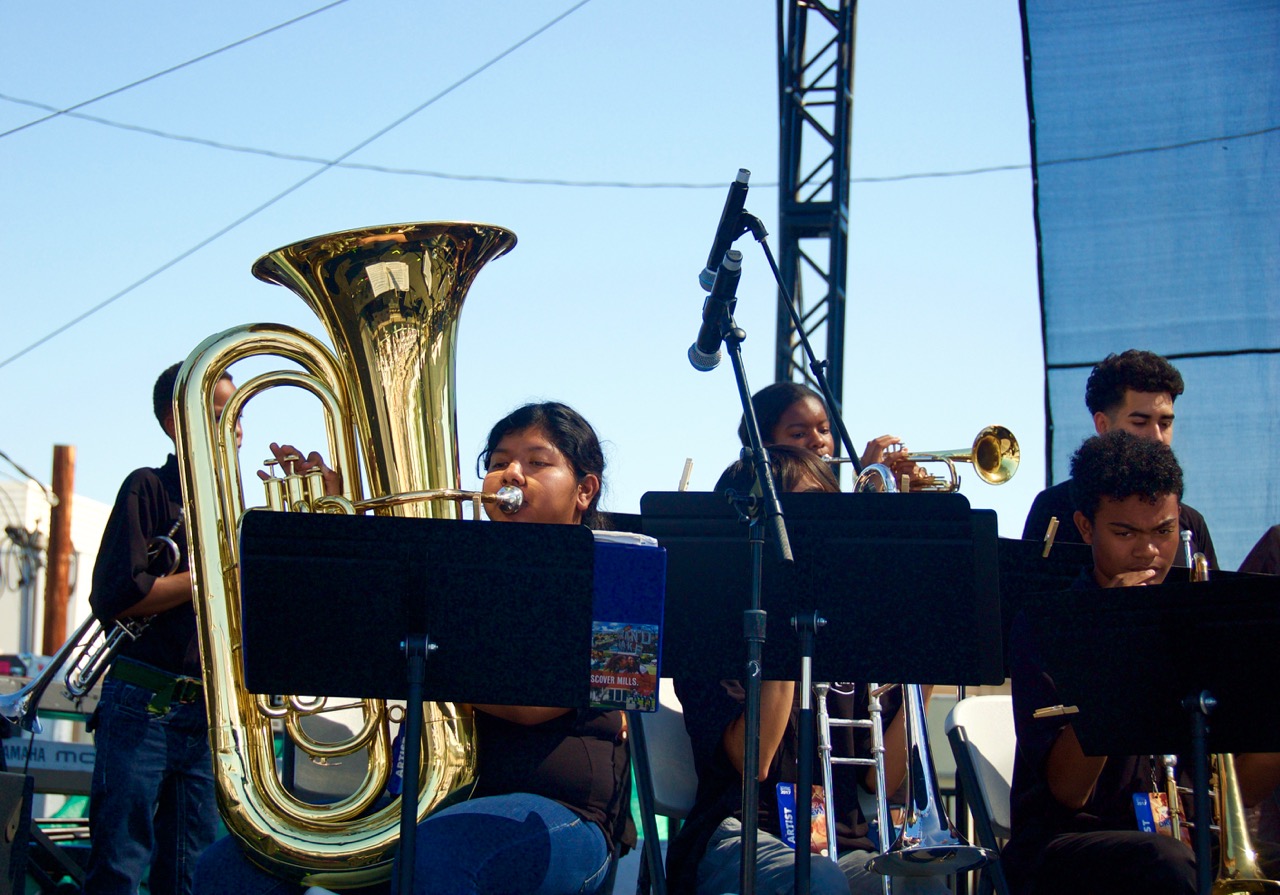 The Fernando Pullum band comprised of students ranging from jr. high school to college were the first to perform. Fernando Pullum has a master’s in trumpet performance and has been teaching students music since the 1980’s. Over the years, his students have performed for dignitaries, and have played with Jackson Brown, Stevie Wonder, Herbie Hancock and much more. Today they had guest performers Kamasi Washington and Ryan Porter from The West Coast Get Down.

The students showed off their well-trained chops under the direction of Pullum.  The large big band sound resonated throughout the venue.  They put on a superb performance that delighted the audience and was a perfect way to kick off the Jazz Festival. 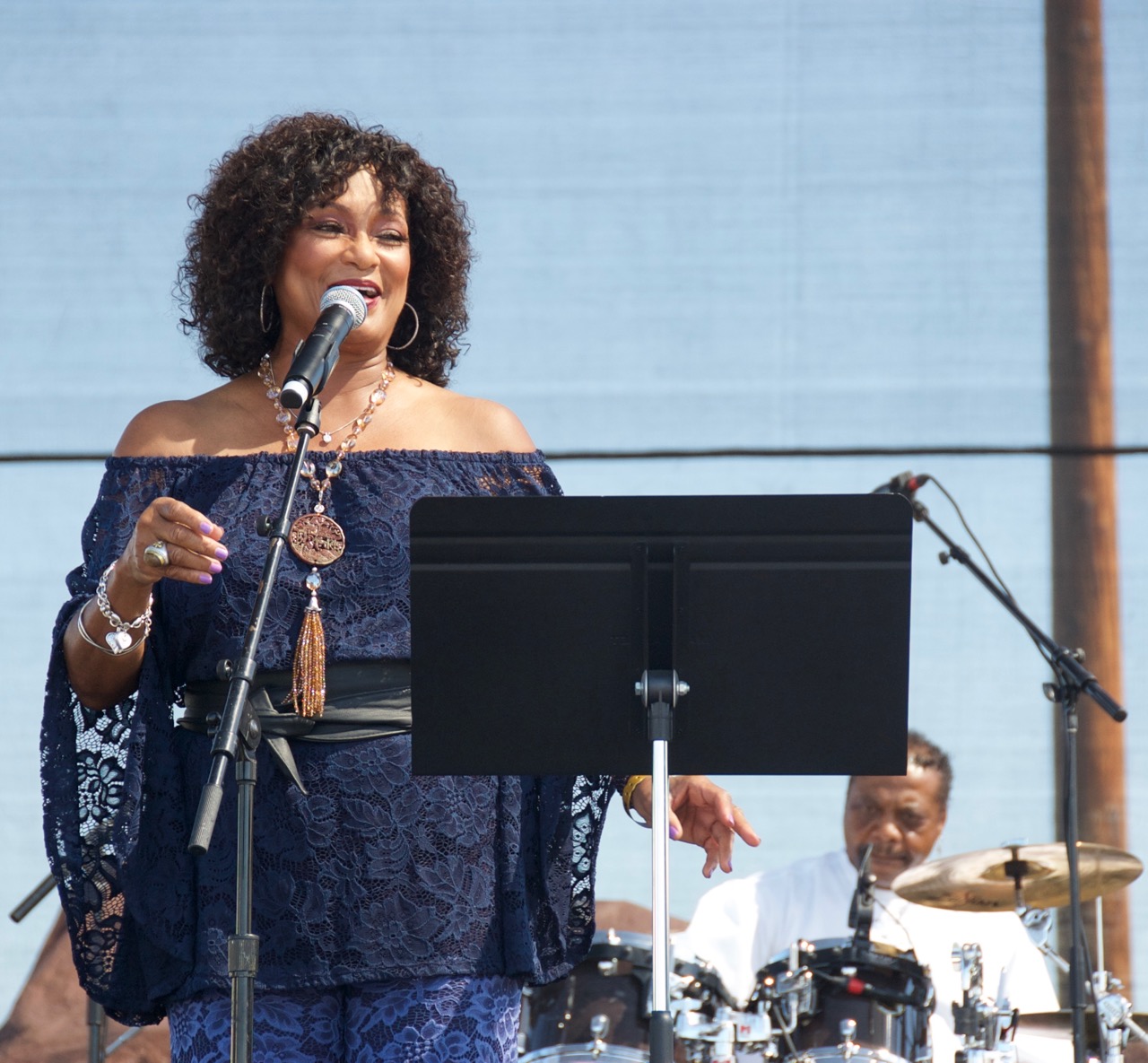 Eloise Laws, composer/vocalist created a classy set of music by singing the blues mixed with some jazzy scatting. “Listen to the Moonlight” had a Latin beat that Eloise crooned masterfully to, then she turned her bluesy vocals over to “Fever” as the bass popped some finger snapping rhythms…She ended with a smooch of a jazzy feel, screamin, and hollering… Then Laws presented some of her original songs “I Ask You Heart Whose Side Are You On” and “I Can’t Let Myself Hurt No More” which was delivered with her soulful singing. Eloise Laws ended her set with a tribute to the old style R&B music and the blues that she said was “the music of promise and the music of humanity.”

After the performance, Eloise Laws told me in our interview: “I have been very fortunate to have been born into a family of musicians, musicians who have all made names for themselves.”

Eloise commented on the songs she had written about love. “Love is part of all of our beings…I am a romantic and I write about my own experiences… falling in and out of love.” She told me she was planning to go into the studio next year and do another CD. She also talked about her Broadway career… she was the co-developer for the Tony-nominated musical, “Ain’t Nothing But The Blues” which had received Tony and the Helen Hayes nominations. “It took me 30 years to get there and I am glad I got there.”

She is now developing another musical that she hopes to launch in LA. Ending our conversation Eloise Laws told me, “I’m really happy that there are jazz festivals like Jazz at Drew that really stick to featuring the jazz artists. Drew is one of the true venues that put jazz on the stage. It should be revered. People want it and love it. The music of yesterday is the music forever.” 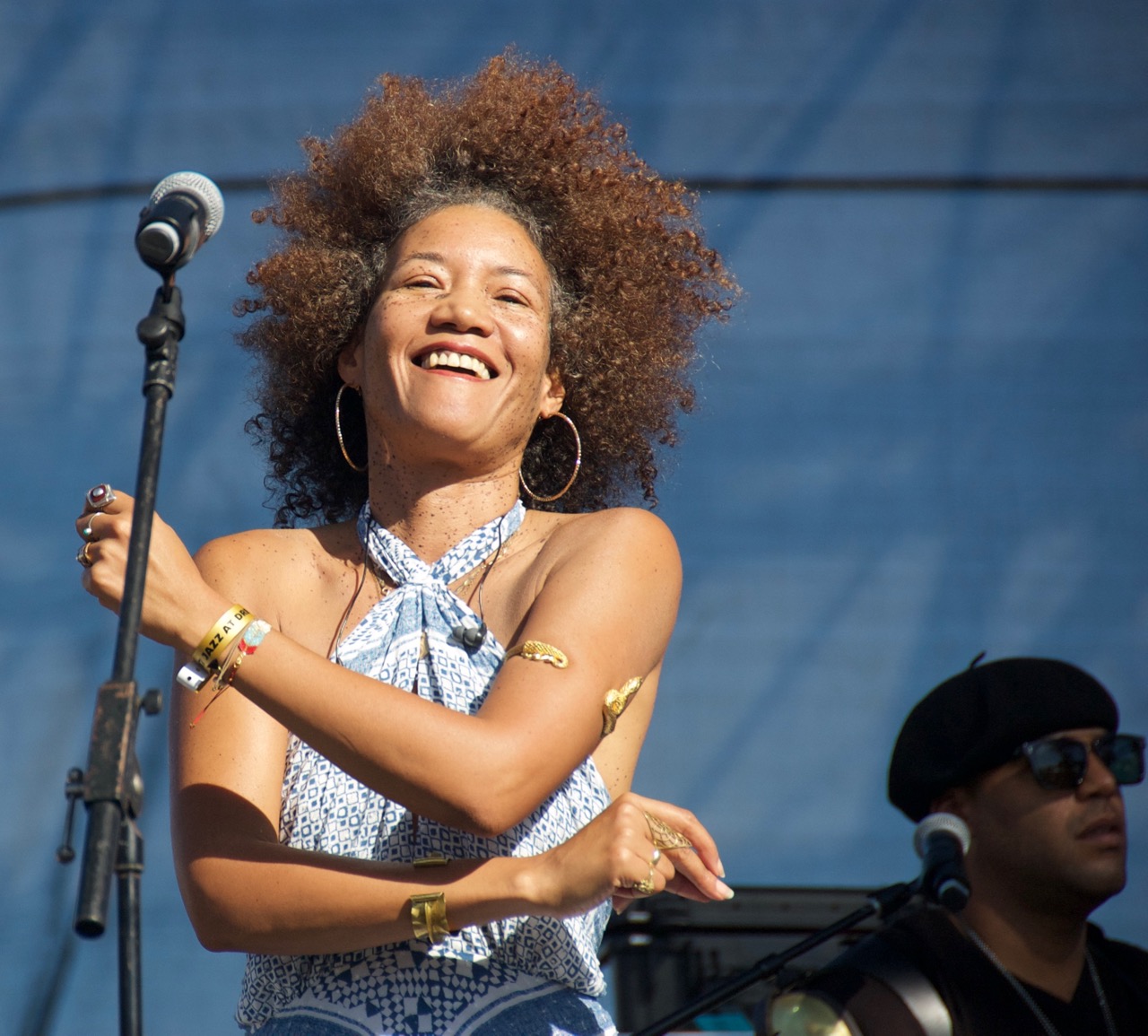 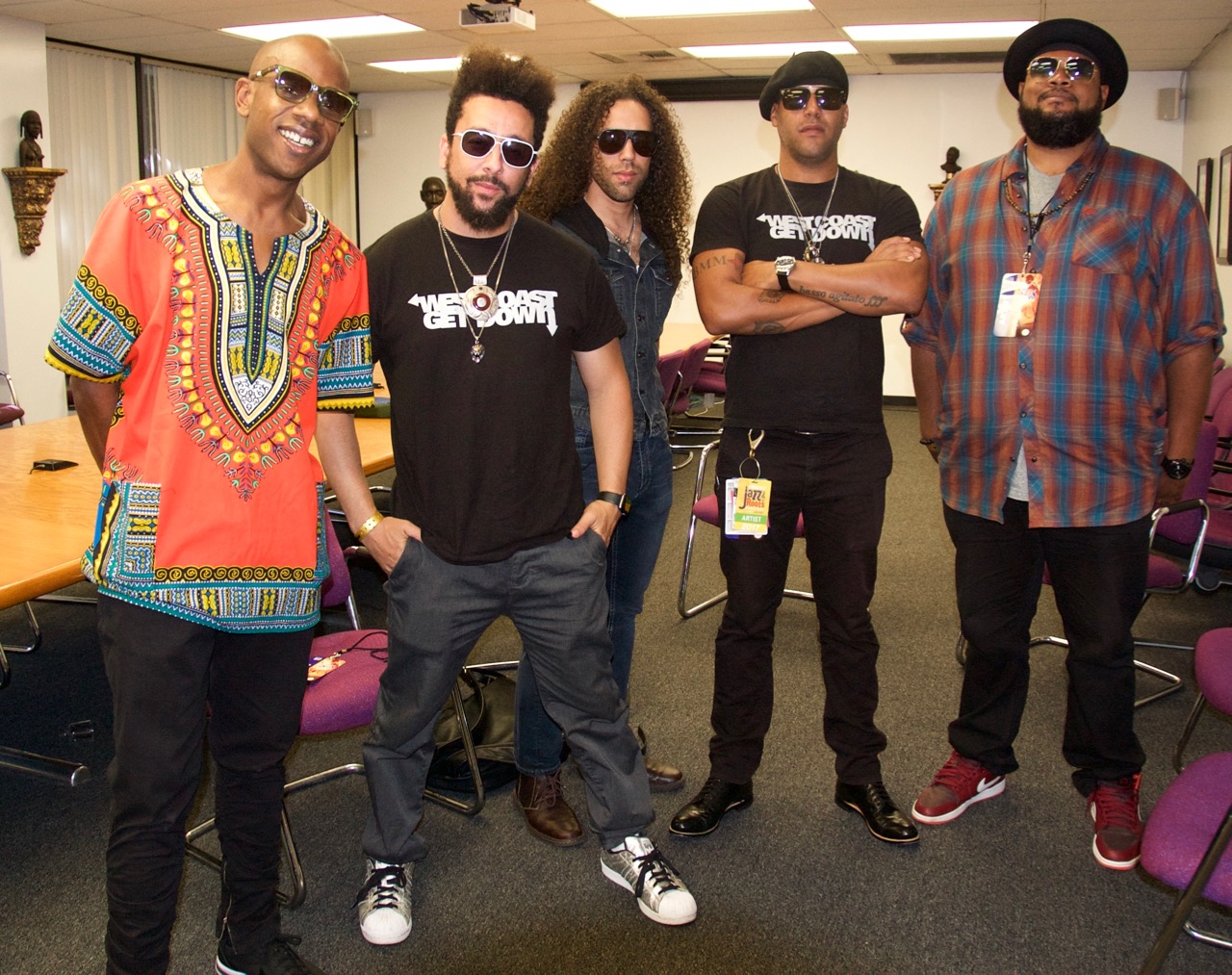 The West Coast Get Down riveted the audience with their eclectic set of music that featured songs from albums that each of the collectives had put out separately.  In 2017, Kamasi Washington released,Thundercat ‘Drunk’, Ronald Bruner released, Triumph, Cameron Graves released Planetary Price, Miles Mosely, Uprising. Ryan Porter, Spangle, Lang Lane.

Their supercharged set pumped out an enticing mixture of electronic music by the DJ, with the lyrical poetry of the vocalist, Patricia Quinn to the driving fluid jazz riffs of the horns, to the explosivepoignant pounding of two drummers, and the bullwhip-wielding of the bass strings    Here are the main musicians playing with this band. Kamasi Washington, (sax), Miles Mosley (bass), Ronald Bruner Jr. (drums), Cameron Graves, (piano), Ryan Porter, (trombone), Brandon Coleman (keys) and Tony Austin Drums, (drums.), Rickey Washington (soprano sax) Chris Gray (trumpet) and Patricia Quinn (vocals).

Ryan Porter (trombone) had just completed a new album called, Spangle, Lang Lane. “It’s out right now and you will hear some of the songs today from it.  I am happy to be here with all these guys because we have known and played with each other for 20 years.   We have a groove that only we can make so it will be a magical event.”

Tony Austin (drummer) commented,  ” We had a lot of influences growing up in the 90’s and late 80’s. We’re heavily influenced by that music.  Our interpretation of jazz is going to include that.  We are all well studied in music.  We all went to college and studied jazz.  But to make the music our own we have to include our own personality and personal tastes.”

Miles Mosley (upright bass) “ I play the upright bass through a series of effects like if Jimi Hendrix played bass.  One of the most important things to accomplish as West Coast Get Down is to return the music back to the people. I think at one point jazz got so high it was up on a pedestal.  For us, coming out of institutions that put jazz on a pedestal, it was important to bring jazz back to places where people were dancing, people were out in the clubs drinking and enjoying it.  It has been wonderful to see my generation reacquaint themselves with this kind of music that we love so much.  West Coast Get Down has put all this fresh energy back into it.”

Cameron Graves (keys) “I grew up with these guys playing the keyboards.  We’ve been honing our music for 20 years.  We’ve each have had residencies in the City and developed our own music too and then have played on each other’s albums.  I have just put out a record called Planetary Prince.

Chris Gray (trumpet)  I’m on all of these guys records.  We all came up together.  We were doing this festival since high school.” 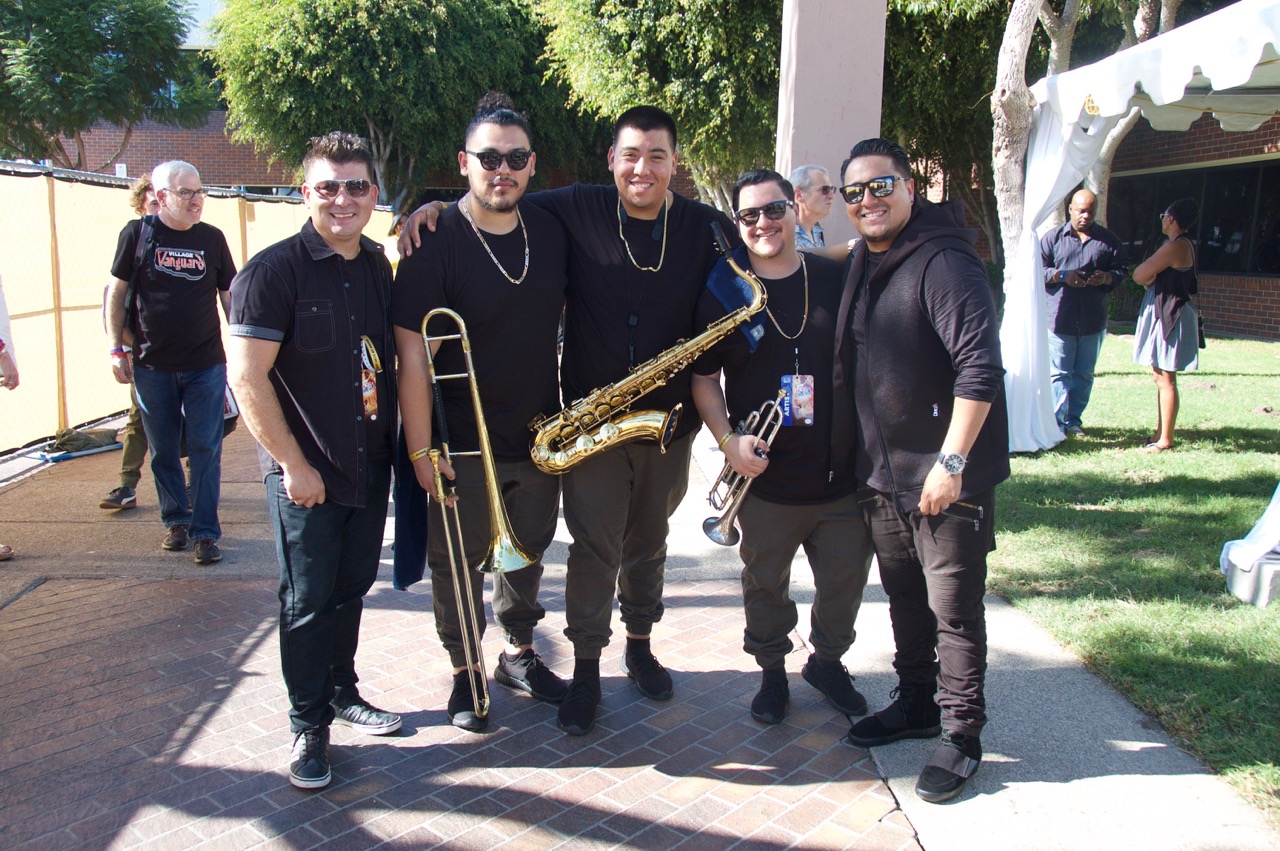 DW3 performed a very romantic and soulful set of covers and original songs.  The group delivered sizzling hot vocals that rocked with the high energy of the horns and rhythm section.The 3 are Damon Reel, Eric Mondragon and Eric’s brother Billy. When I went Facebook Live with Pat Prescott she grabbed Billy Mondragon and he told us, “Our new single is coming out within the next month or so and we just completed our third album, On the Floor.” This was produced by Marcus Miller and Paul Brown. 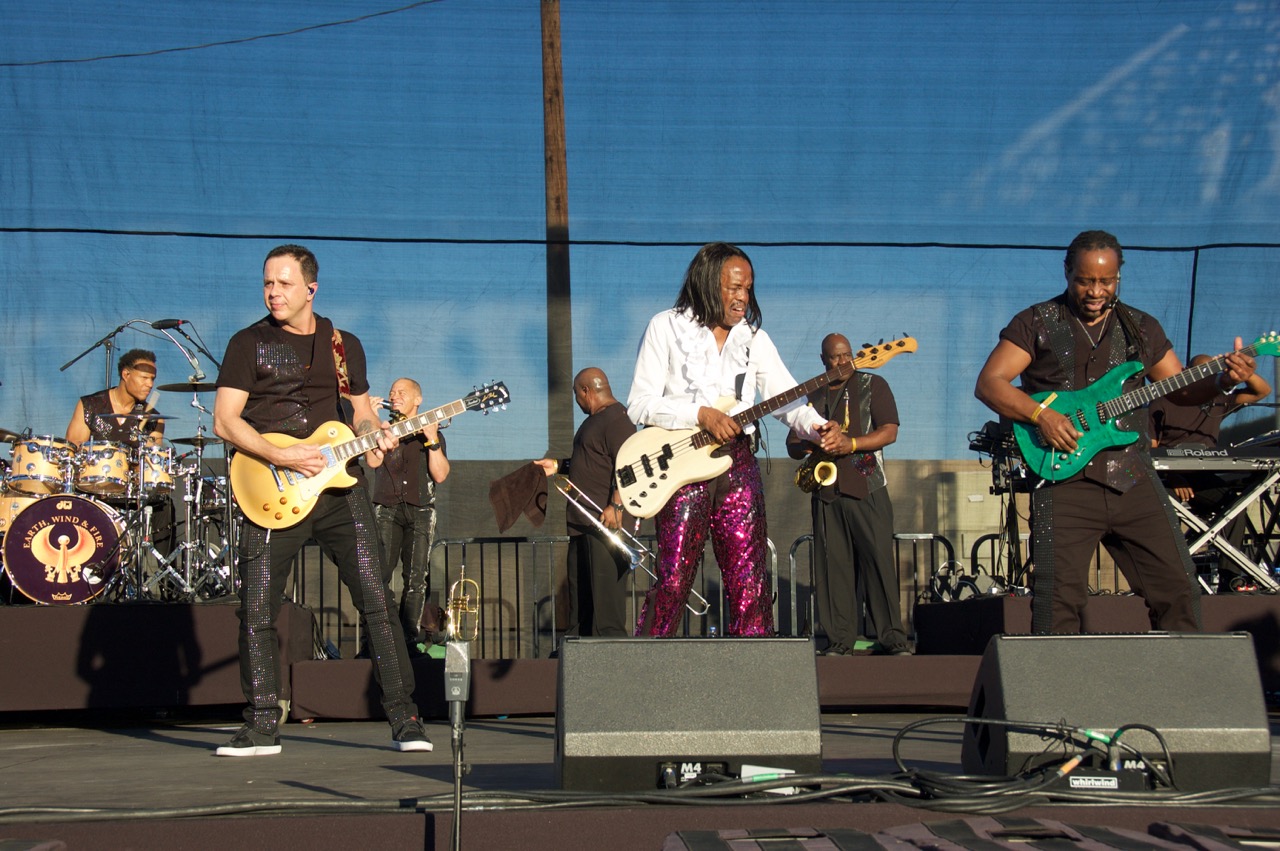 When the legendary group, Earth, Wind & Fire (Verdine White, Phillip Bailey, Ralph Johnson) jumped on stage, they electrified the crowd with non-stop hit tunes. Always funky…always explosive with penetrating energy… always classic… always eliciting the crowd to get up on their feet dancing (even the young kids!)…always staging jazzy choreography that thoroughly entertains. Verdine White soared with intensity as he jumped wildly around smacking the bass strings.  Phillip Bailey’s vocals were powerful as he lifted his head to the heavens hitting those high notes with ease. Ralph Johnson added his superb voice and timbale playing.  The two younger vocalists, (Phillip Bailey’s son… Phillip Bailey) delivered the songs with passion and free-flying dance steps. The audience sang and danced the entire performance, never wanting the music to end. 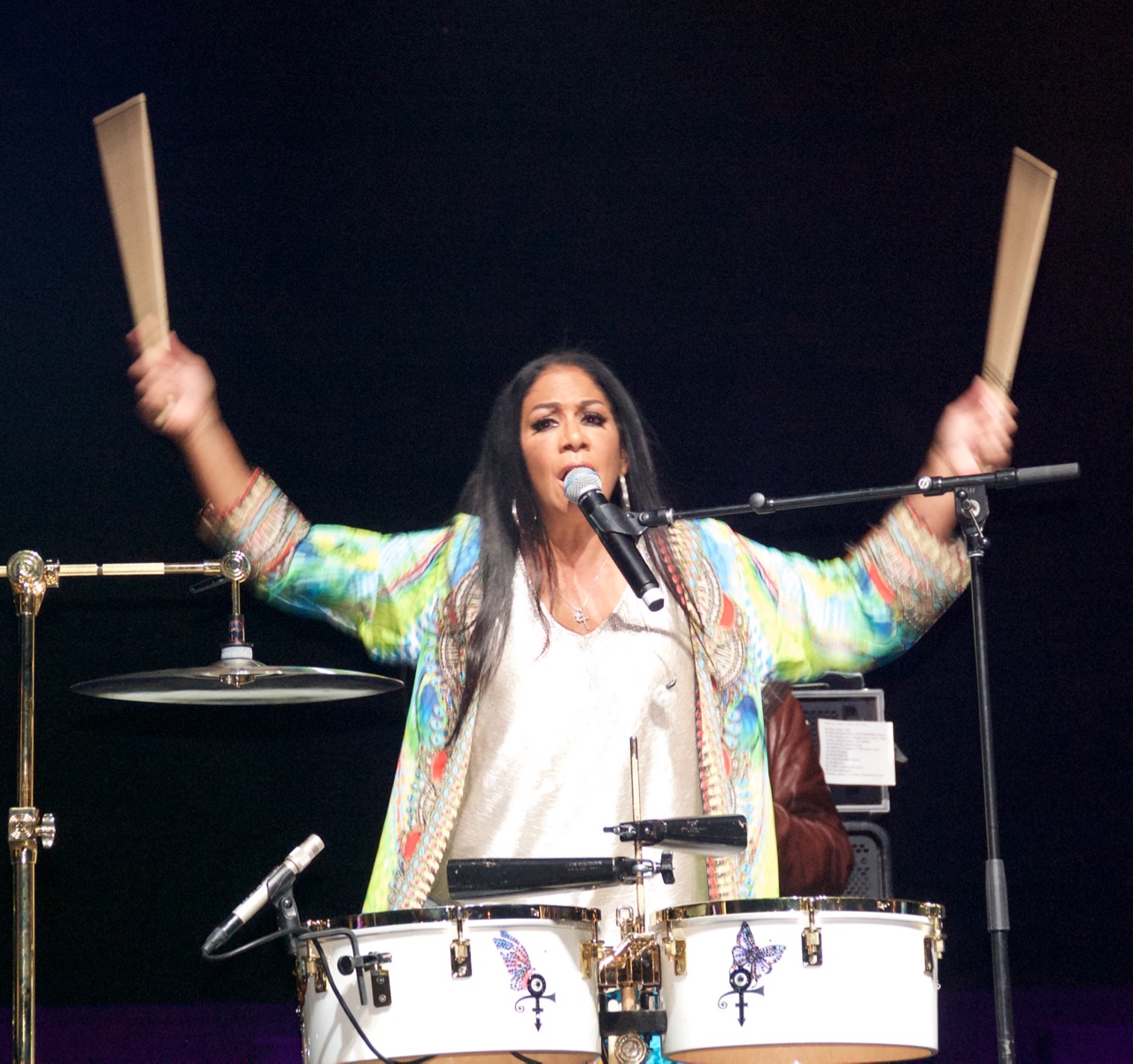 Sheila E. closed out the night by playing a stunning set of music that featured her newest album, Iconic: Message 4 America. It is a collection of music’s great social anthems. She had previously told Rolling Stone Magazine that the album had come out of mourning for Prince and the anger she felt after the 2016 election.

The message Sheila E. wanted to give tonight as she addressed the audience was that it’s time for America to stand up for love, freedom, justice and to fight against bigotry. We were treated to a penetrating show as Sheila E. exuded her endless energy full of song, dance, and sharing her message of love. With her long black hair flying wildly around her face, her long multi-colored satin frock floating gracefully as she whipped around the stage, dancing, playing guitar, timbales, and drums, she mounted a climatic finale for the fabulous day of music.

If you missed Jazz at Drew, 2017, no worries.  They just announced that another great concert will be held next year, 2018.