Today, Insomniac announced the lineup for the 5th edition of We Are NRG SoCal, taking over the NOS Events Center in San Bernardino for two nights on June 22-23, 2018. The highly anticipated event continues to spread its incredible energy across Southern California, having hosting sold-out crowds of over 10,000 Headliners in 2016 and 2017. This year’s massive event marks the first time many renowned artists including Deorro, R3HAB, and 3LAU will be spinning the turntables and embracing the electric intensity of We Are NRG. Tickets for the 5th annual SoCal celebration are currently on sale at We-Are-NRG.com. 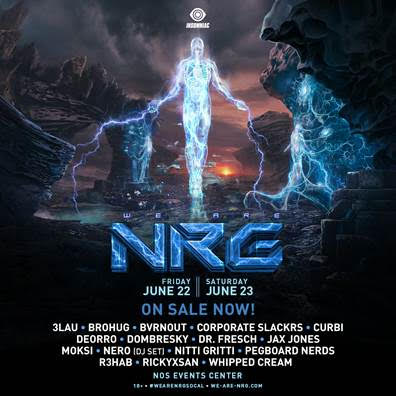 This year’s We Are NRG promises a lineup guaranteed to captivate headliners through the echoes of electro, house, bass and more from the following dance music superstars:

Stay tuned for additional updates and announcements on We Are NRG SoCal by visiting We-Are-NRG.com and following We Are NRG on Facebook. To stay up to date with the latest Insomniac news, visit www.insomniac.com.

Throughout its 25-year history, Insomniac has produced more than 2,000 festivals, concerts and club nights for nearly 5 million attendees across the globe. The company’s premier annual event, Electric Daisy Carnival Las Vegas, is the largest multi-day music festival in North America, and attracts more than 400,000 fans over three days.

'Baby It's You' is the Latest Single from LA Musician Gabriel