The inaugural LOUDWIRE MUSIC AWARDS—America’s hard rock and heavy-metal award show and concert–took place at The Novo in downtown Los Angeles Tuesday night (Oct. 24), as the rock and metal communities came out strong for a historic night of rock ‘n’ roll. Presented by the renowned hard rock music site Loudwire.com, the show was broadcast live on AXS TV and live-streamed through the WWE’s Facebook Live.

The evening kicked off with a spirited performance of “Black Wedding,” IN THIS MOMENT’s take on the Billy Idol classic “White Wedding” with colossal assist from none other than the “Lemmy Lifetime Achievement Award” winner ROB HALFORD of JUDAS PRIEST. The explosive open was followed by one of the band’s biggest hits “Roots,” with the dynamic MARIA BRINK captivating the crowd with her sultry voice and stage presence.

WWE superstar and show host CHRIS JERICHO welcomed fans to the LOUDWIRE MUSIC AWARDS with a little help during his monologue from STEEL PANTHER and EDDIE MONEY before announcing the night’s first award.

ZAKK WYLDE, who has enjoyed success with his Book of Shadows II solo album, and has rocked stages with Ozzy Osbourne, Black Label Society and Zakk Sabbath , was the winner of the “Best Guitarist Award” as sponsored by PRS Guitars. WYLDE returned to that stage later in the night for a wrestling showdown with wrestling great The Miz.

The second performance of the night came from the ICE T led BODY COUNT, which raged through their topical call-to-action “No Lives Matter.” ICE and his crew then gave fans another great collaboration with MEGADETH’s DAVE MUSTAINE stepping in to join on “Civil War.”

As audiences caught their breath, it was time to hand out two more awards. After headlining the Loudwire Awards Kickoff Concert the night before, BEARTOOTH were the winners of the Breakthrough Band of the Year. Fans were able to register their support by streaming the band’s music during the Loudwire Music Awards voting period through partner Apple Music. And following The Breakthrough Award, it was time to salute an artist who has long since established himself.

TONY IOMMI of BLACK SABBATH accepted The Courage Award, as sponsored by Ultimate Classic Rock. IOMMI’s own hand had also been cast prior to the ceremony to be the “Hand of Doom” trophy given out to each of the winners.

NOTHING MORE delivered one of the night’s blistering performances with a rendition of “Go to War,” which eventually segued into a bit of Skrillex’s “First of the Year”while their scorpion-tailed drum contraption transformed onstage to give JONNYHAWKINS an elevated platform as he dished out whizzes and buzzes triggered by the handlebars of his metallic monstrosity. Taking a beat, NOTHING MORE then invited OF MICE AND MEN’s AARON PAULEY to the stage as they performed a rousing tribute of AUDIOSLAVE’s “Show Me How to Live” in honor of the late CHRIS CORNELL.

After the memorable performance, two legends got their due. First up came IRON MAIDEN’s STEVE HARRIS, winner of the “Best Bassist” honor as presented by Indigo Hotels, with another metal legend, ROB HALFORD getting his due as the inaugural “Lemmy Lifetime Achievement Awards” winner. HALFORD paid homage to the man the award is named after, looking skyward and screaming “Lemmy.” He then thanked the fans, adding “The fans are the lifeblood of what we do… We share so much together.”

Following a break in the action, STARSET, who are renowned for their unique stage show, didn’t disappoint as frontman DUSTIN BATES and his spacesuit-wearing cohorts made their mark with performances from the Vessels favorites “Satellite” and “Ricochet.”

Two of the night’s biggest awards came next, with fans having the say by streaming music during the voting period through sponsor Apple Music. In the “Metal Song of the Year” category, exciting up-and-coming rockers POWER TRIP took home the “Hand of Doom” for “Executioner’s Tax.” Meanwhile, I PREVAIL emerged with the “Hard Rock Song of the Year” with “Alone.” I PREVAIL accepted via video, but the band had a special gift in store for those who supported them during the voting–a brand new live video of “Come and Get It” that debuted during the ceremony.

Fresh off their win, POWER TRIP took the Loudwire Music Awards stage for one of the heaviest performances of the evening. “Executioner’s Tax (Swing of the Axe)”had The Novo rafters shaking and started a pit. They followed it up with a special pairing of HATEBREED’s JAMEY JASTA on a cover of MOTÖRHEAD’s “(We Are) The Road Crew,” bringing it full circle from the earlier “Lemmy Lifetime Achievement Award.”  JASTA and vocalist RILEY GALE traded powerfully gruff vocals to the delight of the crowd, with GALE making his way into the crowd and hanging by the scaffolding to the side of the stage.

It was a stellar night for IRON MAIDEN, who followed up STEVE HARRIS’ win earlier in the night with a win for “Best Live Band,” as sponsored by eOne. Then came one of the more emotional moments of the evening–with the winner of the “Best Vocalist.” The biggest vote-getter of the year came in this Fearless Records-sponsored category with the late CHESTER BENNINGTON of LINKIN PARK winning the honor. HALESTORM’s LIZZY HALE, who penned a moving tribute to BENNINGTON after his passing, offered some moving thoughts about the late singer. “All of us, we have terrible beasts and demons and vices that we battle daily. And as humans we have a responsibility to everybody, to each other, to lift each other up. We are in this fight together,” said HALE who also used her speech to make a call-to-action to stop cyberbullying and speaking about the power that words can have in a negative and positive manner.

Finishing out the segment, one of rock’s true good guys, SAMMY HAGAR, was presented with “The Humanitarian Award,” sponsored by AXS TV for his philanthropic work giving back to organizations in need over the years. His CHICKENFOOT bandmate CHAD SMITH of RED HOT CHILI PEPPERS did the honors and introduced HAGAR.

Following on the heels of NOTHING MORE’s CHRIS CORNELL nod earlier in the night, HALESTORM delivered a powerful performance of SOUNDGARDEN’s “Fell on Black Days,” then welcomed their old tourmate LITA FORD out for a powerful show-of-force from the women of rock with a revved up performance of the classic RUNAWAYS song “Cherry Bomb.” As they performed, the ladies were joined onstage by ASH COSTELLO of NEW YEARS DAY, JILL JANUS of HUNTRESS, PEARL ADAY of PEARL, EMMA ANZAI of SICK PUPPIES, MIXI DEMNER of STITCHED UP HEART and CARLA HARVEY and HEIDI SHEPHERD of BUTCHER BABIES.

With each of the other instrumental categories dished out, JOEY KRAMER of AEROSMITH’s introduced the “Best Drummer” category. GOJIRA‘s MARIO DUPLANTIER completed the four core pieces by taking home the “Best Drummer”honor as backed by Rockin’ Roastin’ Coffee. After a somber In Memoriam package for the many music artists we’ve lost this year, the “Best New Artist” category sponsored by Century Media was announced, with (mostly) sibling rockers GRETAVAN FLEET taking home the honor. And showing the power of rock and metal, BABYMETAL emerged victorious in the “Most Dedicated Fans” category, as presented by BMG and Rise. With the award show hitting the home stretch, metal vets ANTHRAX got the pit going with “Caught in a Mosh,” then took the stage for an intriguing and raucous cover of the Kansas classic, “Carry On My Wayward Son.”

The LOUDWIRE MUSIC AWARDS finished with a flurry, as it was a double-dip win for both STONE SOUR and AVENGED SEVENFOLD. STONE SOUR won the “Hard Rock Artist of the Year” as backed by Frontiers Records SRL and the “Hard Rock Album of the Year” for the stellar album Hydrograd as sponsored by The Music Experience. AVENGED SEVENFOLD, meanwhile, won the “Metal Artist of the Year,” sponsored by BlackCraft, and “Metal Album of the Year” for the excellent new release, The Stage, as sponsored by Razor & Tie. Having just doubled-down with two of the night’s biggest awards, AVENGED treated fans to a climactic four-song finale that included “The Stage,” “Nightmare,” “God Damn” and “Hail to the King.”

The LOUDWIRE MUSIC AWARDS proved to be a perfect culmination to a celebration of rock and metal that started with the Loudwire Music Awards kickoff concert on Monday night (Oct. 23) at the Echoplex, featuring BEARTOOTH, ROYAL THUNDER, KING WOMAN and MY TICKET HOME. The celebration continued Tuesday during the day with the “HARD ROCK AND HEAVY METAL SUMMIT” at the GRAMMY MUSEUM which featured panels with SAMMY HAGAR, ROB HALFORD, STEVE VAI, REX BROWN, ALEX SKOLNICK, FRANK BELLO and others. The summit was designed to hit on hot-button issues for artists in the music and entertainment industry as well as give fans a chance to see a live taping of LOUDWIRE.com’s popular segment “Wikipedia: Fact or Fiction.”

For more information about the LOUDWIRE MUSIC AWARDS, visit:
http://loudwireawards.com 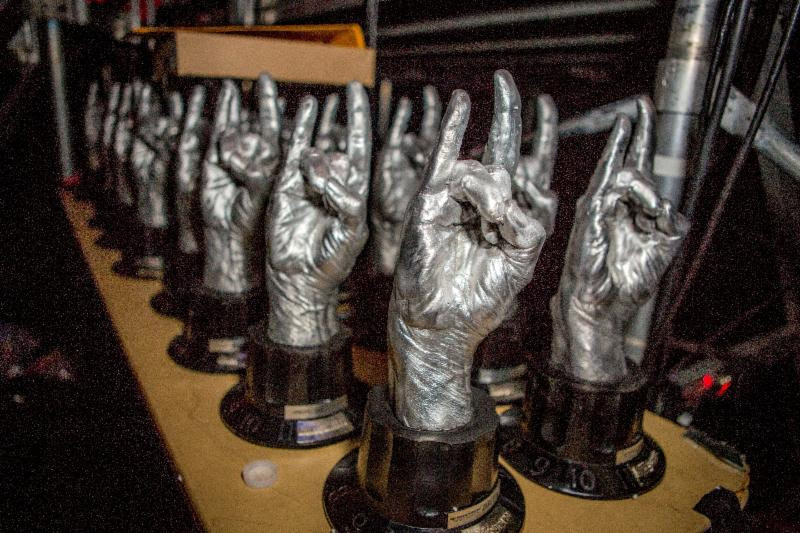 METAL ARTIST OF THE YEAR (BlackCraft):

HARD ROCK ALBUM OF THE YEAR (The Music Experience):

AVENGED SEVENFOLD, The Stage (presented by HOWARD JONES of LIGHT THE TORCH, JILL JANUS of HUNTRESS and CHUCK BILLY of TESTAMENT)

Anthrax, “Caught in a Mosh”

Power Trip, w/Jamey Jasta of Hatebreed, “(We Are) The Road Crew” (Motörhead cover)

I Prevail, “Come and Get It” (Live) video premiere

Nothing More, “Go to War”

Nothing More, “First of the Year (Equinox)” (Skrillex cover)

In This Moment, “Roots”