There was chaos as concert attendees were evacuated from the Manchester UK Arena where Ariana Grande was performing Monday night. 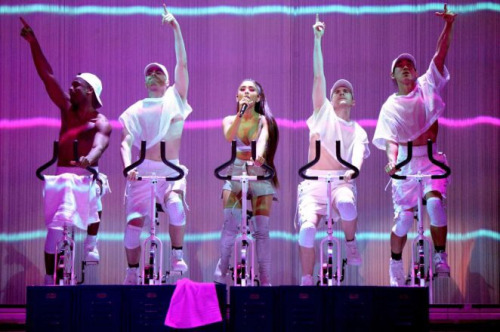 19 people have been confirmed dead and 50 more injured, in what British Prime Minister Theresa May is calling “an appalling suicide attack”. The Greater Manchester Police are treating this incident as an act of terrorism. According to the Manchester Arena website, it is the largest indoor arena in Europe with a capacity for 21,000 people.

There were several conflicting reports over social media regarding whether or not there there were actual explosions. According to numerous media and Twitter reports , two explosions were heard at Ariana Grande’s Concert in Manchester, England. After hearing a loud band, concert goers were evacuated from the Manchester Arena.

“Coronation Street” actress Julie Hesmondhalgh said that there was a bang, but no explosions. She also said that there were was a stampede of people trying to get out of the stadium in response to the loud bang.

Liverpool City Region metro mayor Steve Rotheram tweeted: “My 2 daughters caught up in the Manchester explosion at the arena. They are thankfully safe, but I fear for others.”

Confirmed deaths at the Manchester arena. Feel sick to think that people have lost their lives at a gig attended by so many young people.

My 2 daughters caught up in the Manchester explosion at the arena. They are thankfully safe, but I fear for others.

The Dangerous Woman Tour is Grande’s kicked off on Feb. 3 in Phoenix, Arizona and was set to continue on to Europe after her show in Manchester.

People are doing their best , over social media , to help people locate family members that were in attendance at the concert. As well as offering assistance.

RE TWEET! IF ANYONE IS SEARCHING FOR THIER CHILD IN MANCHESTER, HERE IS A POSSIBLE LEAD! STAY SAFE!! pic.twitter.com/GOCsXOXX33

Anyone needing somewhere to stay can come to our Manchester headquarters in the city centre.

Grande’s publicist, Joseph Carozza told The New York Times that the singer is OK. “We are further investigating what happened.”

Ariana Grande offered her condolences to the victims of the deadly attack following her Manchester, England, concert on Monday night.

broken.
from the bottom of my heart, i am so so sorry. i don't have words.

We, at The Hollywood 360, would like to extend our prayers to all the families effected by this senseless act of terrorism.