What do we consider a victory?  Is it when our sport’s team wins a game?  Is it when the athlete crosses the finish line first?  Or is it when the competitor hits adversity and obstacles and doesn’t know how he or she will ever rise again from the dirt of despair …then thrusts their hands forward, pushing themselves up… ready to fight again?

Gary Stretch, Director/Producer/Writer of the documentary film Through My Father’s Eyes,, The Ronda Rousey Story knows victory and defeat first -hand in all its forms as it pertains to the boxing ring.  With his vast experience, the former world boxing champion told Ronda Rousey’s tale with keen perception, sensitivity and ruthless honesty.  The Director acknowledged, “This is a story about a beautiful girl who is strong and fierce.”

A packed house of celebrities and invited guests watched the inspiring movie on Friday evening, December 30th, 2016 at the Hollywood Chinese Mann Theaters. The movie was produced by Peter Antico, and executive produced by Yin Tze Liew, Chris Ball and Rene Cogan.  The phenomenal red carpet event was done by powerhouse publicist, Christine Peake of Santa Monica’s Peakgroup.  Guests sipped on delicious Deep Eddy cocktails provided by the lovely Tiara and Malcolm, also a selection of HINT waters were on hand. 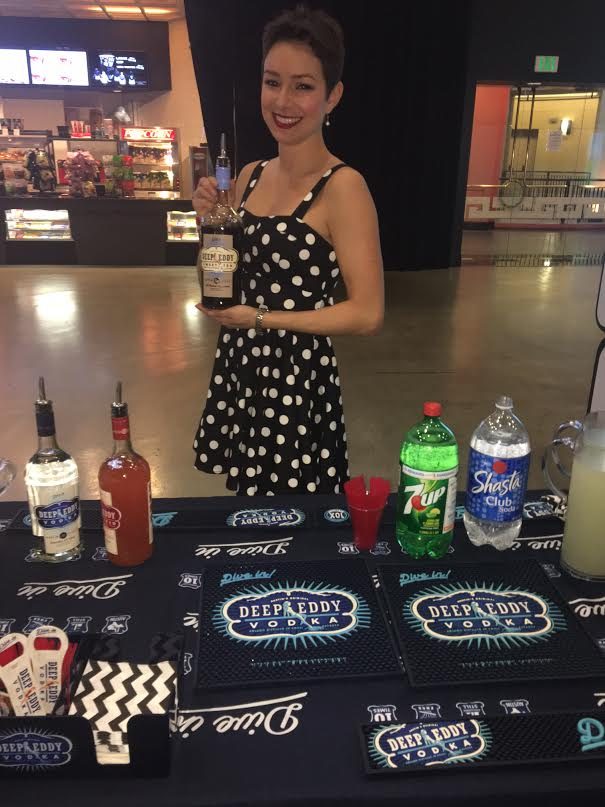 The film documented Ronda surviving her father’s suicide as a little girl, to her winning the bronze medal in the 2008 Olympics in judo, to her downfall of addiction and living out of her car, to becoming the first female ever to participate in UFC Boxing. The movie took seven years to complete…later that evening Ronda would fight in Las Vegas to regain her UFC title…technically the story wasn’t completely over. “We could keep going because she continues to fly high…” Stretch told me.

Ronda began her life fighting adversity because the umbilical-chord was wrapped around her throat cutting off air to the brain.  She didn’t speak until six years of age.  The mother always worried about Ronda, but her father said, ‘Don’t worry about Ronda, she’s the one.’  He knew she would be a winner…an Olympian.  “Ronda had this incredible spirit in her to prove her father right.  Most fighters fight because people don’t believe in them, but Ronda had the love and support of her Father,” Stretch said.

Why did Gary Stretch make this documentary?  He looked pensive when asked the question.  His manner depicted a soft spoken man, who was passionate and proud of this woman that had changed the face of boxing forever.  “This is a film about the empowerment of women.  I would love to see more female directors in Hollywood because there is a sensitivity and strength in women that we don’t always give credit to. I just said to myself,  this is an incredible story about this girl who was sure she was going to make it into the UFC.  I felt she was going to make it too.  It became a reality within the seven years of shooting the movie.”

“The movie is told in real time.  From zero to hero,” Stretch explained.  In the opening shot one hears waves rippling on the shore and the Director’s voice reciting a poem.  We first enter the world of a father and a daughter throwing pebbles into the water together – their strong bond established immediately.  This becomes the backbone of the story and will be referred to again and again.  Skipping along the childhood memories, Ronda’s mother, AnnMaria De Mars,  a world champion in judo,  provided many insights into her daughter’s background.   She too greatly contributed to Ronda’s self -confidence and tenacity.

The intense training Rousey took on throughout her career was documented expertly as Stretch interviewed her different trainers.  One point became extremely clear…

Ronda Rousey had an intense competitive spirit that never relented.

“If she lost the fights, it wouldn’t have mattered.  I was just intrigued with this will of this woman.  I was intrigued with her drive.  She had every strike against her.”

When Gary Stretch had finished shooting the footage, he took it to Scott Conrad who had edited the Rocky movies.  At first, Gary couldn’t afford to pay the editor his fee; however, a year later he got a call from Conrad. The Oscar winning editor told Stretch he had been thinking about the film. After seeing the footage, Scott Conrad thought there was something special there. He took the job.  “It is a Rocky story!” Stretch exclaimed.

Not only was the movie gripping and provocative, the musical score underlined the motivating spirit that infuses the story.  Damon Elliott, musician/composer/ and son of Dionne Warwick, was the composer.  “I composed the music from the heart.  Ronda is such an amazing person.  She’s so animated an inspirational.  The music came easily because I just pulled from her spirit.  Gary Stretch is such an amazing writer and he co-wrote the theme song with me.  He wrote the lyrics,” Damon said.

He continued, “Gary called me and said I have these words on a piece of paper and I want you to come to the house and read them.  I told him he had a Grammy Award winning song.  It was poetry in motion.  I sat down at the piano and came up with the melody to the song. Two hours later, we went to the studio that night and we recorded the song. It was difficult to do because I lost my father young too.   The lyrics, the feeling of the song, were right from my heart.”

The orchestration that highlighted the fighting scenes pulsed with intoxicating feeling, plus the film clips were cut in such a way, one was pulled into the drama of each scene.  The movie comes full circle.  At the end, the little girl, (who is portraying Ronda) returns to the water’s edge, jumps into her father’s arms and we hear Gary Stretch’s voice reciting the poem…Through My Father’s Eyes.

Ronda Rousey did not win her fight that evening.  The English pub, Pig N’Whistle was jammed packed with the invited guests who had seen the movie.  When Ronda Rousey took her spot in the ring, the crowd roared with love.  She looked beautiful.  She looked confident.  She looked like a warrior prepared for battle.  In a few minutes the fight was over and Ronda’s face was bloodied.  But that look of determination and courage never left her aura.

What do we consider a victory?

Gary Stretch spoke about the elements of boxing…

“Boxing takes years of preparation and you have one night to get it right.  So many things can throw you off like you get a cold.  It’s not like other sports where you can pass the ball or depend on your teammates to help you out.  The stress is immense, you got to get everything right, your weight has to be right, your diet.  It’s raw, you put yourself out there.”

No matter what, Ronda Rousey achieved victory for herself.  The film Through My Father’s Eyes… will inspire many young girls to attain their dreams, to never give up, to rise up when beaten down.

Those who get in the ring, I have great respect for.  Whether you get there for a minute or for a decade, to even compete…deserves respect.  I think Ronda Rousey has shown women that they can do anything.  She is a very powerful figure for women and how we as men look at women from now on.”

Peter Antico, Producer of Through My Father’s Eyes, The Ronda Rousey Story gave his warmest wishes and congratulations:

“I would like to thank Ronda, her family, especially her mother AnnMaria for her honesty, forthrightness and character.  I also wish to thank my partner in this venture, Gary Stretch.  He is not only a former world boxing champion, but a brilliant artist whose Freudian style of interviewing his subjects pulls the deepest emotional honesty from their souls.” 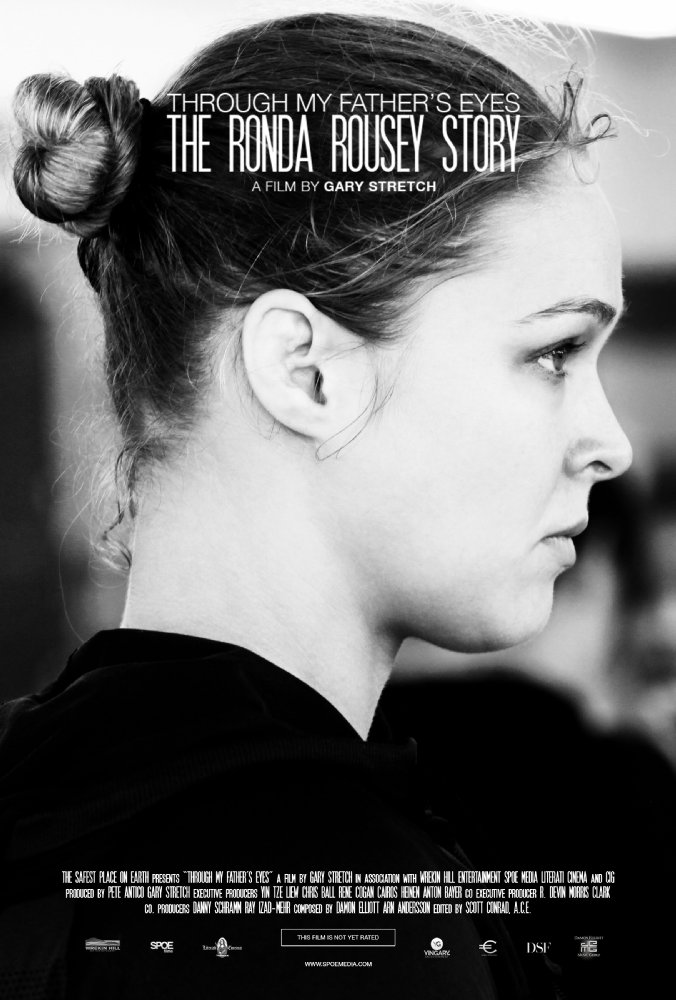 For more information on cast & production crew go to: http://www.imdb.com/title/tt6089596/fullcredits?ref_=tt_ov_st_sm