Suburban Showgirl Can She Have It All?

Palmer Davis, actress, dancer, choreographer, dance teacher stars in a one-woman show where she poses the question, can a female professional showgirl have it all?  Is she able to be a wife, a mother, can she stay agile, powerful, caring, sensitive, organized who takes care of a family while also being an always available sexy, in-shape, versatile dancer?  And what sacrifices does a woman have to make in order to succeed in all these areas?  Palmer plays character Wendy Walker, and proceeds to answer all these questions as we follow Wendy’s antics from first getting locked in the bathroom at an audition to looking back at her life and what circumstances have brought the dancer to this critical point.

For 65 minutes Ms. Davis charms the audience with her prolific acting, dancing and singing abilities.  Moving from one scenario to another, Palmer moves effortlessly from the domestic world of being a neurotic mother and wife to the anxious aging dancer who has to put up with provoking auditions where she’s competing with younger girls.  She uses humor, wit and pure gumption to survive both worlds.

Problems: her beloved husband Charlie is an alcoholic who has disappointed Wendy countless times and now is in jail for drunk driving, her daughter Hannah doesn’t have rhythm nor cares about her ballet tutu and rather put it on her head then take dance class, juggling schedules in order to audition for dancing gigs, keeping her body slim and flexible after having a baby, and most importantly… can she still do a split?  Amazingly, Wendy does a perfect one and it’s impressive!  The climax of the show is she has been hired to be in a movie…then the part is cut.  How does one deal with this huge disappointment?

Victories: Wendy lands showgirl jobs that leads to a top agent who casts her again and again in shows, she falls in love and gets married, has two children, teaches dance classes and helps a student find his confidence, in the end figures out how to relate to her daughter’s own personal rhythm rather than judging Hannah, finds out how to balance her life and realizes she can’t keep enabling her alcoholic husband.

This actress succeeds in keeping the show moving swiftly plus engaging the audience’s interest in Wendy’s challenges.  Her dancing is exquisite…from top to bottom she moves like a gazelle with grace and power.   Her sculpted body resonates Showgirl whether she’s wearing dance pants and a leotard or the brilliant frock of a Las Vegas chorus girl.  Ms. Davis is a consummate actress/performer.  Her credits read: playing attorney Margaret Finn in CSI Las Vegas for ten seasons, and as a dancer toured in the first National of the Will Rogers Follies and was a Rockette in the Radio City Christmas Spectacular.  “My children who are teenagers now,  grew up in diapers going to rehearsals and auditions with me,” Palmer said.

Suburban Showgirl started out being autobiographical.  Palmer was told by actor Richard Kline to develop it further.  “Why?” she asked. My life isn’t that interesting.”

But Palmer kept writing the show and developing the character.  She first performed the show at the Gary Marshall Theater, The Falcon and also performed the production at her high school in La Jolla.  Wanting to take Suburban Showgirl further, Palmer then fictionalized the character and went deeper into the story.

Palmer requested fellow dancer/choreographer/director Cate Caplin to direct her newest rendition of the show.  Ms. Caplin has produced, directed and choreographed over 200 of her own productions.  She has worked in television, film, music videos, commercials and theatrical venues.  Caplin’s direction is tight and detailed.  She pays attention to the finest of niceties of the production and with each stride, costume change, hand movements, comedic timing that  Ms. Davis makes, the expertise of Caplin’s direction is evident.

In the end I think the Suburban Showgirl has it all.  Revelations! Good relationship with herself and her children! And she can still strut her stuff!

Writen by and starring: Palmer Davis 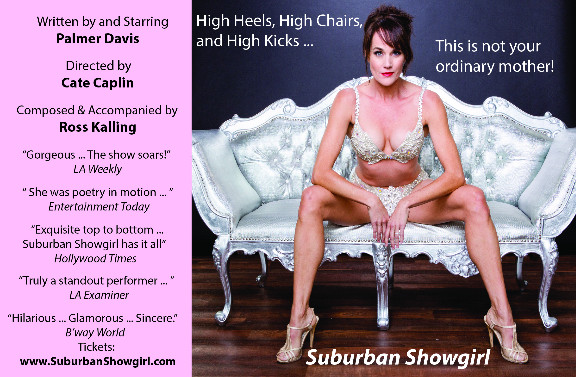 Las Vegas Spring 2017!!!
To bring Suburban Showgirl to a theater near you contact us at
bookings@suburbanshowgirl.com