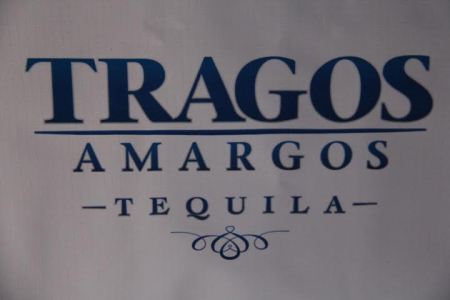 “Thank you all for being here, [in case you don’t know] i have had up to now, a Regional Mexican musical trajectory of 52 years, and the name of my [the] Tequila makes sense because when you have tequila shots, you are basically having Tragos Amargos Spanish for bitter shots,” joked Ayala before having a few shots. “The tequila will be available here in the United States and Mexico, and will be available in the Silver: which is the clear bottle and is triple distilled straight to the bottle; Reposado: which has amber yellow color with shades of gold and has an age life of 9 months in American Oak Barrels; and also in Añejo: which has a crystal amber color with shades of copper and has an age life of 18 months in French Oak Barrels. We worked on this for quite some time and I am pleased with the end results, but it up to you [the consumer] of what you or they think when they try it.”

During the press conference beautiful models were giving away free samples of the tequila and some bottles were given away via a raffle.

We were able to speak with the Regional Mexican music legend to get his take on the drink and how it got its name.

“First of all the brand [the Tequila’s name] is catchy, and I [we] hope the Tequila will become very popular and famous like us, like we have become musically. Many people have tasted the tequila and we have gotten great feedback from them as to the taste. The name of the tequila also happens to be the coincidental title [“Tragos Amargos”] of a very popular song penned by Freddie Records founder and producer Freddie Martinez, I recorded and released in 1980 off the album Mas Musica Brava,” added Ayala before heading out to a scheduled performance the same evening at the House of Blues.