On March 21, we gathered in a room, just over a dozen of us, for a 20 minute preview of the indie sci-fi film “MindGamers,” we were each connected to a “cognition headband” that is connected to a tablet via a USB connector, which we were told was streaming our brainwaves.

This may seem very sci-fi, but it was a test run for a one night event ,on Tuesday, March 28th, where Fathom Events Teams With Terra Mater Film Studios will connect one thousand human minds in two locations (LA and NY.) via these “cognition headbands.” The participants will simultaneously be connected via cloud technology as they watch “MindGamers” while their brainwave data is collected. This will be an once-in-a-lifetime event that will make neuroscience history. 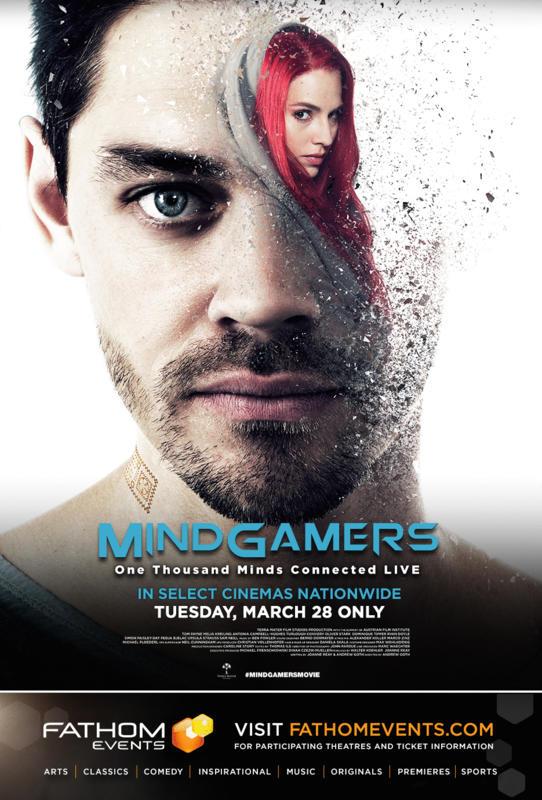 The Tuesday, March 28th event will open with talks from leaders in the fields of technology, neuroscience and the collective consciousness. Following the film there will be a LIVE Q&A and world’s first image of collective human cognition will be revealed.

Headlined by Sam Neill (“Jurassic Park”) and Tom Payne (The Walking Dead), the feature film “MindGamers” is innovative grounded science fiction fare (Black Mirror, The OA and Westworld). It has a very slick and stylish aesthetic. It follows a group of brilliant young students who create a wireless neural network with the potential to link every mind on earth via a quantum computer. Capable of transferring motor-skills from one brain to another, they have brought into existence the first shareware for human motor-skills. They freely spread this technology, believing it to be a first step towards a new equality and intellectual freedom. But they soon discover that they themselves are part of a much greater and more sinister experiment, as dark forces emerge that threaten to subvert this network into a means of mass-control.

During a live panel discussion at the Red Bull Offices back in January,  Co-writer and producer Joanne Reay said that when her and director, Andrew Goth, started this project, they wanted to make a movie that explored the potential of the human mind. Reay and Goth have worked together before “MindGamers”.  They collaborated on “Everybody Loves Sunshine” (released in the US as B.U.S.T.E.D.). It starred David Bowie and Andrew Goth (Goldie). The film also was selected as the opening film for the Tokyo Film Festival in 1999 and won several awards.

The two filmmakers have referred to film as being “grounded sci-fi”—meaning the neuro-tech in the movie will become, in some form, a reality.

“Science is oscillating and scary and exciting all at the same time,” Goth said. “I think that’s why I wanted to work on this film.”

Tim Mullen and Mikey Siegel are two of the team behind that experiment. Mullen is the CEO of Qusp Labs — a neurotechnology firm — and has developed wearable brain-computer interface (BCI) technology similar to what’s being used in these headbands. Siegel is a lecturer at Stanford University who discusses topics concerning technology and consciousness. His Twitter profile describes him as a “consciousness hacker.”

“This is one of the most important issues of our time… we are actually changing as a species,” Siegel said. [The brain is] actually changing the landscape of human culture. We’re profoundly different than what we were 20, 30 years ago.”

Also at the January Red Bull Office panel discussion, Mullen, he said that “MindGamers” technology  isn’t that far off from what is already being developed in reality.

“The overarching vision that in the future we will have the ability to link the nervous systems of humans… the groundwork for that is being laid right now,” he said.

Tim Mullen and his science team at Qusp didn’t advise filmmakers during the production of the film  or have anything to do with the content in the movie. The experiment is something wholly separate.

As one of the 1000, who will be hooked up on March 28th, I’m not sure how close we may or may not be to the technology represented in “Mindgamers”,or if the movie and the experiment will go beyond gimmicky marketing , but it will definitely be one of the most unique movie experiences I’ve had to date.

With the introduction of Netflix’s, MINDFLIX, and Hughes Research Lab’ experiments with Enhanced training through Neurostimulation , MindGamers premise may be closer than we think.

Tickets for “MindGamers: One Thousand Minds Connected Live” can be purchased online beginning Friday, February 3, 2017, by visiting  www.FathomEvents.com or at participating theater box offices. Fans throughout the U.S. will be able to enjoy the event in select movie theaters. For a complete list of theater locations visit the Fathom Events website (theaters and participants are subject to change).