Kaliyani – An Artist of the Sacred Feminine

On a temperate winter’s day in Southern California I visited Kaliyani in the sacred gardens behind her home.  Here, we spent a  tranquil few hours talking about her career as an Artist and her sacred journey that brought her to this place of inspiration.  Brazilian-born, Kaliyani calls herself a spiritually inspired visionary and a passionate midwife to the rebirth of the Sacred Feminine on the planet.  She has created two stunning music videos that celebrate her commitment to the Sacred Feminine. 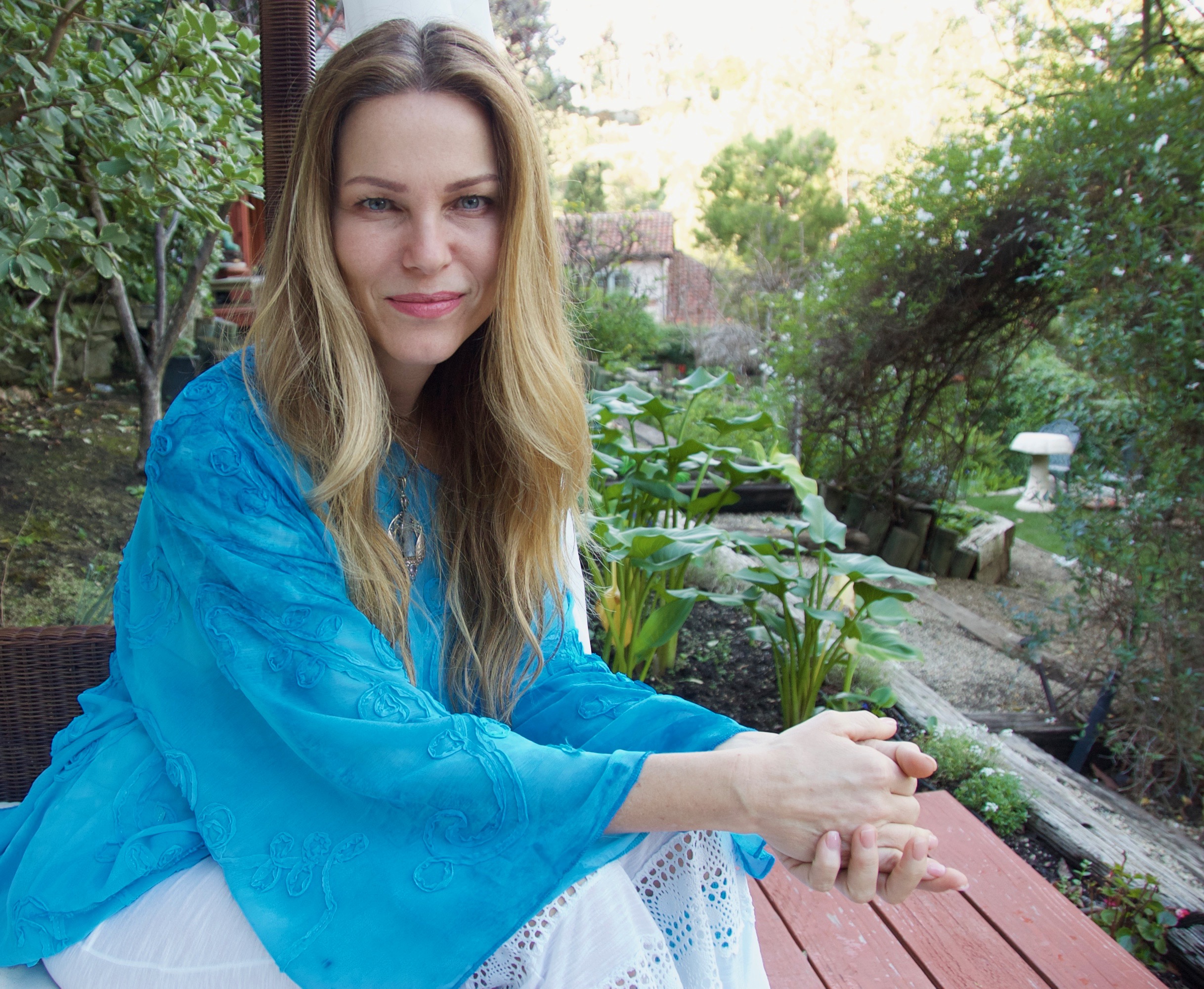 The first video, “Nammu’s Invocation” has received over two million views on YouTube since its inception in 2014 and was number two on the Billboard Hot Single chart earlier this year. Her most recent video, “Tears for Inanna” which was released in November 2017, has reached over 2,000 views and its popularity is quickly climbing upwards.  Both songs and music videos were a collaboration with Hollywood composer/filmmaker Riz Story (writer, director and producer of A Winter Rose which features Kaliyani’s first single).

Before Kaliyani felt the calling to feature her singing skills, she divided her time between working in her conscious media company, Stargate Alliance, her soul coaching practice, and being a mother.  Her countenance settles peacefully around one as she speaks softly with a lovely Portuguese lilt.  Long golden hair frames her beautiful face … her blue eyes reflect serenity yet, there is a passionate creative soul flickering.  Kaliyani’s musical style elegantly blends exotic world music with complex transcendent qualities. Emotive and alluring, her vocals summon Operatic and Gregorian styles, while her music uniquely delves into dramatic, contemporary orchestration profoundly rich in structure.

Here is my interview with Kaliyani. 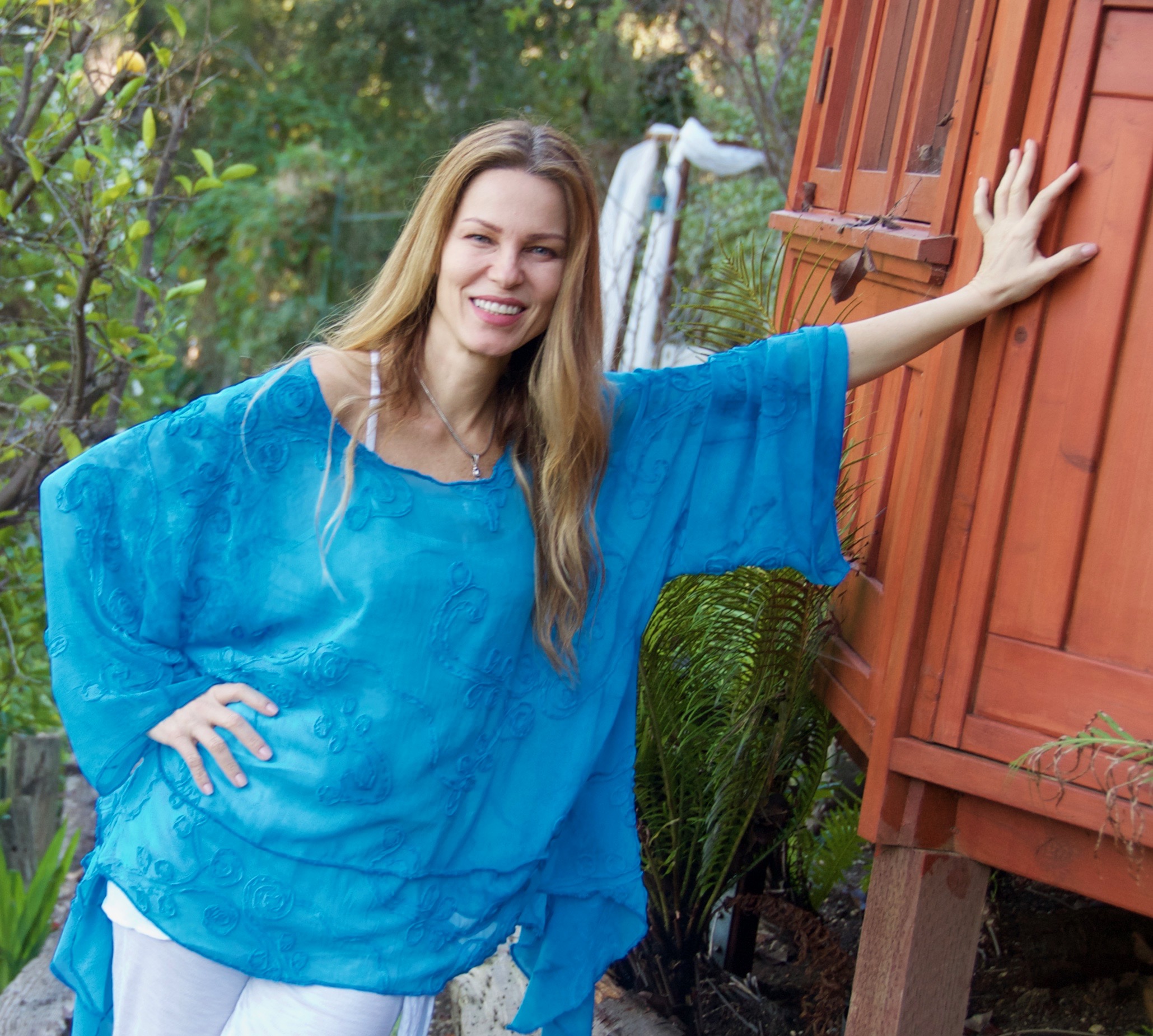 The Hollywood 360: What do you want to project as an Artist and share with your audience?

Kaliyani: I feel that I am not making plans as I go, but there is a nature as to what is coming through to me which is connected to an awakening that I had back in 2003.  That took me to the portal of the divine feminine.  I am connected to the divine feminine and I am awakening that in the consciousness of our community globally.  We have reached a path that has numbed part of our senses that is connected to the feminine watery energy that flows through out our psyches.

The Hollywood 360: What was happening to you psychologically and spiritually that brought you to the music?

Kaliyani: This process occurred over a long time span.  First, let me talk about my childhood.  I didn’t have a normal childhood.  I wasn’t hanging out with kids my age.  I was very curious about God and my mother taught me how to pray. So I prayed everyday; however, I didn’t go to church.  I could sense there was something much bigger out there.  I lived in Brazil so I was exposed to a lot of psychic phenomena and  spiritual practices.  I was doing yoga from the age of 15 to 18. I was constantly devouring books of the spiritual nature and  I studied Hands for Light healing and explored trans-channeling.  I had so many teachers cross my path.  I had my own visions and dreams.

When I met my ex-husband,  I was trying to synthesize everything I had learned up to that point.  He was a son of German Jewish father and a Catholic mother. I needed some grounding when I met him.  I could never put my spiritual practices into a singular focus.  My soul’s goal was to find a clear and unifying point for everything I had learned.   I never got to it.  I then decided to put my books on the shelf.  I became a mother, dedicated myself to my family and walked away from my spiritual exploration, wanting to preserve the sanctity of our relationship.  I kept all spiritual things to myself.

The Hollywood 360: I would guess that after a while you might have felt stifled.

Kaliyani: I finally left my marriage in 2003 because I had to get back to my life’s mission.  I did start praying after many years of keeping quiet. … The prayer was called Keratitis. It was so long but very powerful.  I did this every morning and before I went to sleep.  I did it for quite a while.   Then I started having visions of this feminine deity…  her statue now is at the fountain in the gardens here. It was Guan Yin. She is a female bodhisattva and she’s the over arching energy guiding me.  Everyone knows my connection to her.  I had not heard about her before so her coming to me in a vision was mystical. This brought me to visions and dreams.

I was onto my new life.  I returned to school to get my M.A. in Spiritual Psychology at University of Santa Monica. I worked at the West Los Angeles Veterans Psychiatric Research Department where I interviewed over 200 patients during the course of research for two published psychiatric medical journals. 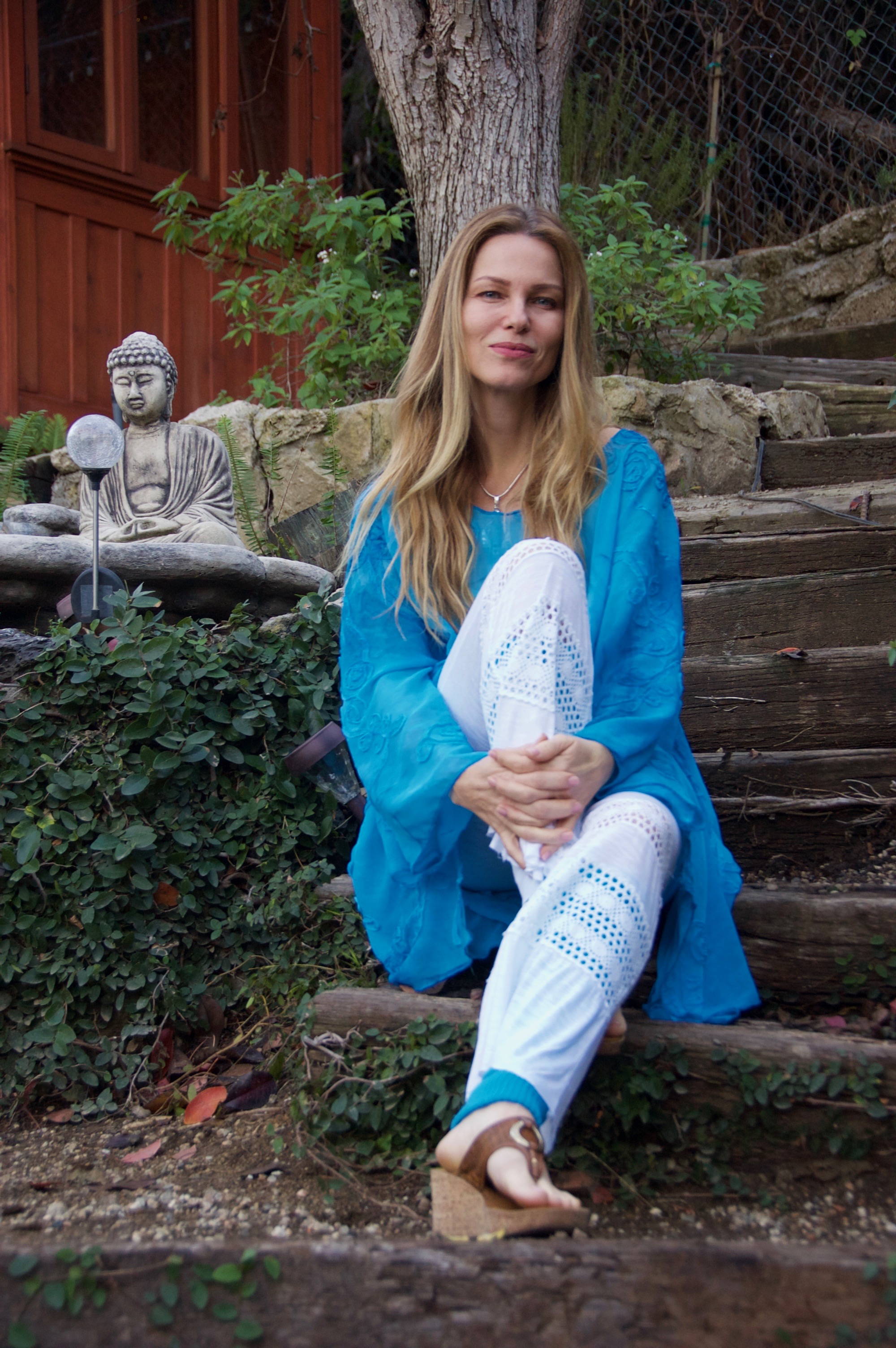 The Hollywood 360: You seemed to now be on the right path for yourself.

Kaliyani: I believed I was. I also created a conscious media company, Stargate Alliance, which came about as the result of a living vision I had in 2008 following a much deep inner processing at the end of the first year of my M.A. program. With Stargate Alliance I assisted in co-creating a peace platform called Peace-Link, the documentary Secrets of Love, and the recently-released feature indie film A Winter Rose, which showcased my first single “Nammu’s Invocation” in the soundtrack.

The Hollywood 360:  How did you meet Riz Story, who helped create your music videos?

Kaliyani: When I attended the premiere of the documentary Three Magic Words, I met Riz Story, a film director, writer, and music producer.  I didn’t have time to talk with him but gave him my card.

He called me.  I asked myself, ‘Who am I?’  He’s a movie director, a music producer, and incredible writer yet he wanted to assist me in creating music for my documentary.  We agreed to meet and work together. I knew what kind of music I wanted.  Even though I had hired Riz to compose,  I sat with him and translated what I was hearing musically.  I gave him 3 samples of instrumental music.  After 3 ½ hours, we asked each other,  do you hear what I hear?

He created brand new music with me giving input.  I told Riz I would take the music home and spend time with it.  I said I am going to try to sing to it.  He asked me if I had a song and I said no. 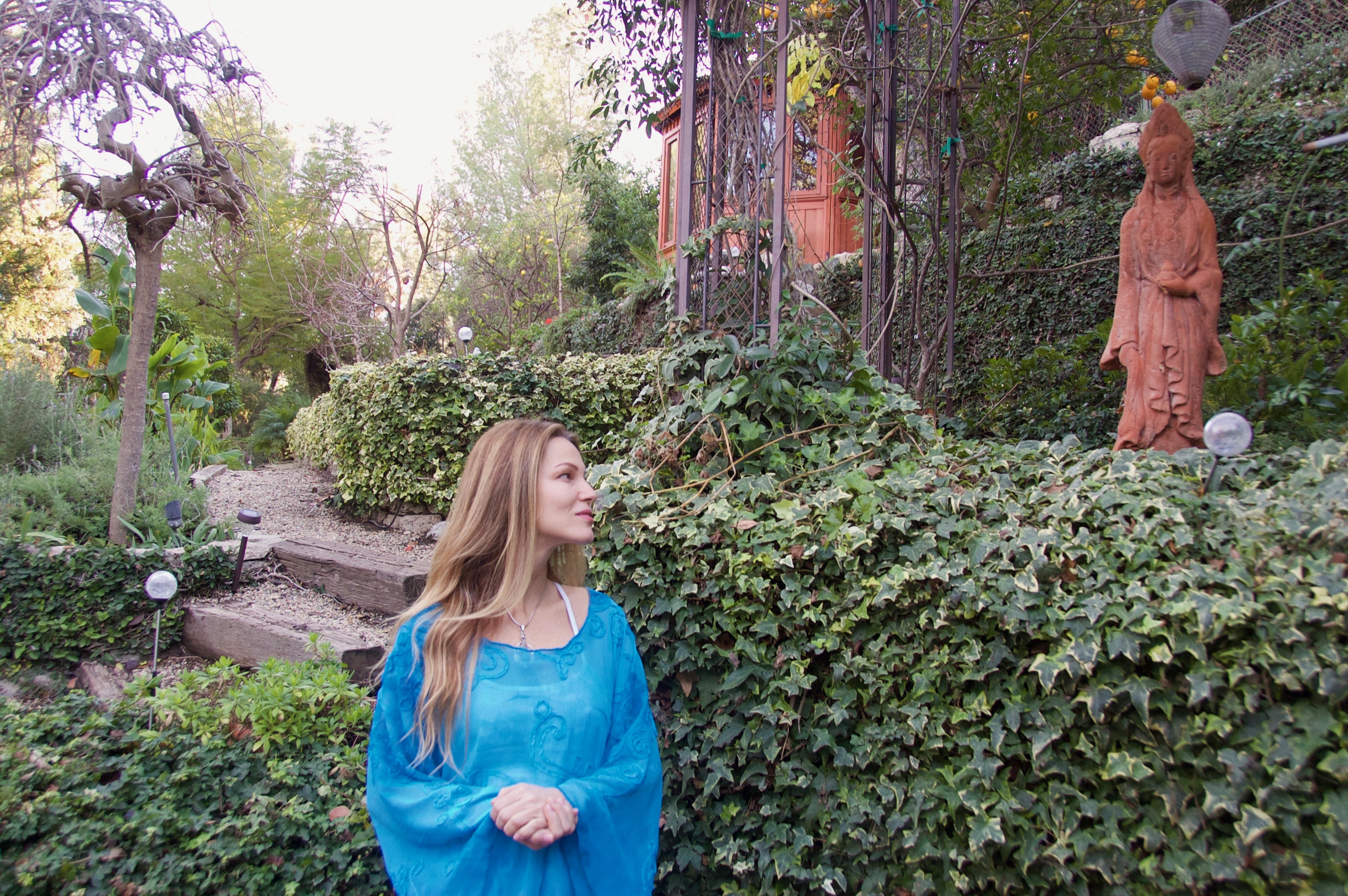 The Hollywood 360:  You had never sang before, nor wrote a song, but you believed you could create a song.  This was an unusual quest.

Kaliyani: Yes, it was very challenging.  Between being a mom, and working my business, I spent every night in prayer and listened to the instrumental.  One day I turned on my recorder on my phone and I began singing these sounds.  I did that a few times.  I was ready to go back to Riz and record.  He put a microphone in front of me and I was scared. He turned everything on and said do your thing.  There was no repairing, no fixing.  I insisted on doing it 6 times though.   I had no preconceived ideas of how to do it.  What came out was very soulful.

What we created became a visionary myth that turned into “Nammu’s Invocation” music video.  Nammu was the Goddess who created the world.  She’s an archaic matrix of the universe .

I did “Tears for Innana” a few months later.  I didn’t want to publish it.  I didn’t want to release it as a record. I  never identified myself as a singer. But the music took a life of it own.  We shot “Nammu’s Invocation” in Death Valley then traveled to the Mayan Riviera in Mexico.  The video took us most of  2013.  In 2014 we cut it.  Then we put it up YouTube.

The recently-released feature indie film, which I co-produced,  A Winter Rose, also showcased “Nammu’s Invocation” in the soundtrack.

The Hollywood 360: After making two music videos, receiving over two million views on your first one,  how do you feel about your career as a singer/composer?

Kaliyani: I am navigating this strange world.  I don’t want to control it.  I am doing what I am meant to do.  I want people to be touched by the light and sound,  the music is powerful and the imagery is evoking.  I have chosen to define myself as  singles artist. I don’t want to produce an album.

I am going to do what is authentic.  If I’m too busy and fulfilling my other roles,  I don’t want to feel that I have to take away from its authentic tone.

I am committed to a visual for every release I make.  Every one of my tracks will have a music video.  I am open to what comes through without my head leading.  I want to be fluid and flowing with with what is happening in the moment.

The Hollywood 360: What are you offering the world at large, or what do you want to be offering. As artist we are vehicles and channels every artist is to express and help mankind?

Kaliyani: I am hoping to get people out of their heads and get into their hearts with the frequency of sound.  Those sounds go into their being and speak to them.  From that point whatever they need to receive from those sounds will be revealed to them.  More hearts will be cracked open that way.  On a greater scale,  the world would feel through the sounds the sacred feminine and then restore the sacred feminine energy back into the universe.

To watch “Nammu’s Invocation go to: