Jon Secada’s  ‘… To Beny Moré, with Love.’ is being released today. The first single, ‘Como Fue’, is a duo with Beny Moré and one of the most recognizable classics from the Cuban songwriter, producer and multi-instrumentalist.

The album, produced by Julio Bagué, pays tribute to one of the most important icons in afro-american music in collaboration with Ray Santos (Moré’s  original arranger), Peer Music, and the Charlie Sepúlveda Big Band.   This album is a collective labor of love that came from the heart of all the parties involved in the project, from my partners, the producers, the musicians, the arrangers… Ray Santos worked with Beny Moré in the 50’s, he’s 88 years old and arranged this music flawlessly… It’s impressive and each piece of the puzzle led to this. Everybody made an effort of genuine love to make sure the project really was what it should be, a tremendous tribute to a tremendous artist”  Jon Secada 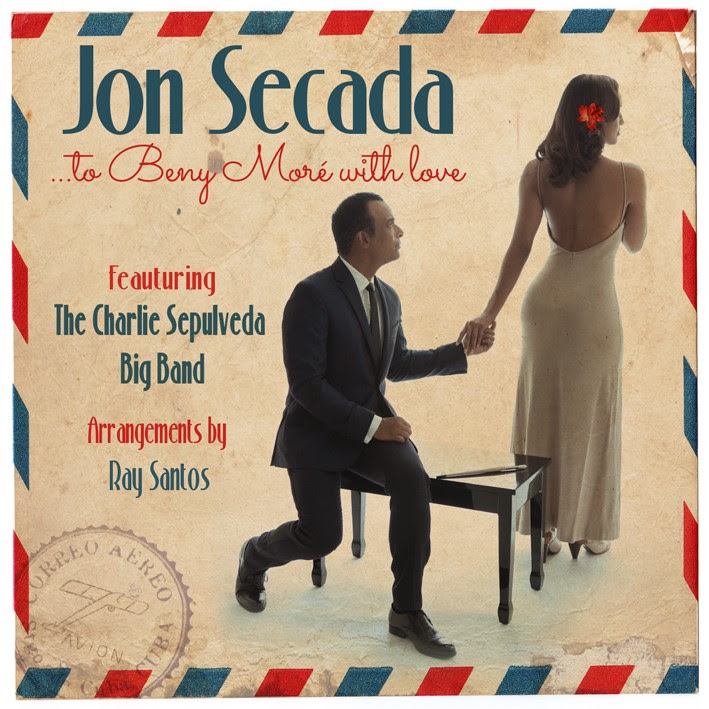 Beny Moré is a tropical music legend and has greatly influenced rhythms like mambo, sonand montuno… ‘…To Beny Moré, with Love’  was interpreted for the first time live for the recording of a Soundstage special on PBS that will broadcast in the USA during the first quarter of 2017.

“It was the first live show, we were going to follow the album’s order, so when I heard Bonito Sabroso’s intro, I thought Wow! “this is really happening” and since that moment on, I knew it was going to be a magical experience”. Jon Secada

CAA agency is preparing a 20 city tour in the United States in which Secada will be joined by The Charlie Seúlveda Big Band, offering a show that gathers the songs from the tribute as well as many of his hits.

With a career spanning over two decades, two Grammy Awards, 20 million albums sold, and starring roles on Broadway, the acclaimed, romantic sounds of Jon Secada, have resulted in numerous hits in English and Spanish, establishing him as one of the first bilingual artists to have international crossover success. Adored by millions around the world, he is recognized as an international superstar by both fans and peers alike for his soulful and melodic voice.

Acknowledged as Humanitarian of the year in 2016 by The Muhammad Ali Foundation, Secada’s career skyrocketed in 1991, with the release of his self-titled debut album    Jon Secada (SBK/EMI), which sold over six million copies worldwide, was certified triple platinum in the U.S., and reached No.15 on Billboard’s Pop album chart.

Beyond his own hits, Secada is widely recognized for his impeccable producing and songwriting skills. One of his first major breaks came from collaborating with Gloria Estefan in the late 1980s, which led to him co-writing her #1 hit single, “Coming Out of the Dark.”  Since then, Secada has gone on to pen countless popular songs for superstars such as Jennifer Lopez and Ricky Martin.

Secada’s impact goes beyond music as he has devoted himself to assisting various charitable groups all over the world through his personal organization, “Jon Secada Charities.”  He has been active with many causes to help Hispanic Americans, children, education, AIDS research, and child abuse. His commitment to education and helping others led him to create the Jon Secada Music Scholarship at the University of Miami.
He’s also led an ongoing effort to raise awareness for Hepatitis C by partnering with pharmaceutical giant MERCK and The American Liver Foundation. For his efforts, The Pan American Health Organization recently honored Secada with an award that acknowledged him as a leader in Hepatitis C awareness around the world.

In September 2012, Jon also headlined the “Miami Rocks The Troops” benefit concert, supporting US military veterans across the country. Throughout his career Secada has participated in various international television shows including being a celebrity judge on the international smash, “Latin American Idol,” for it’s entire four season run, and as a celebrity contestant on Univision’s hit dance show “Mira Quien Baila” (Latin version of “Dancing with the stars”) which reaches over 10 million viewers.   In addition to numerous recordings such as “Same Dream” and “Classics,” in the late 2000’s, in 2011, Jon released his seventh Spanish album, Otra Vez (YPyramid), which received universal acclaim, and spawned multiple hits on radio stations, worldwide.  Secada continued a musical legacy with the release of “I’m Never Too Far Away”, which charted top 25 on Billboard.   The single and music video commemorated the 20th anniversary of Secada’s music career and the release of his official RIAA Gold hit “Just Another Day.” The song also marked Secada’s first collaboration with Billboard Magazine’s five time “Producer of the year,” and six time ASCAP “Songwriter of the Year” winner, Rudy Perez.