House of Blues Music Forward Foundation has launched a special anniversary campaign to celebrate the organization’s 25th year enriching the lives of young people and kick-starting careers in the music industry. As one of the nation’s top youth development organizations focused on the music industry, Music Forward has made a big impact in its first quarter-century, in total investing $25 million to inspire and empower over 1,000,000 youth.

To honor this accomplishment power future development, Music Forward has launched its 25th anniversary campaign. Running 25 weeks, the campaign aims to raise $250,000 to continue and expand impactful programs that accelerate opportunities for the next generation of music industry leaders and innovators. Already helping to reach this quarter-million-dollar goal is generous support from 25th Anniversary sponsors including City National, EPAM, Go Vision, Mastercard, Oracle and Visa. 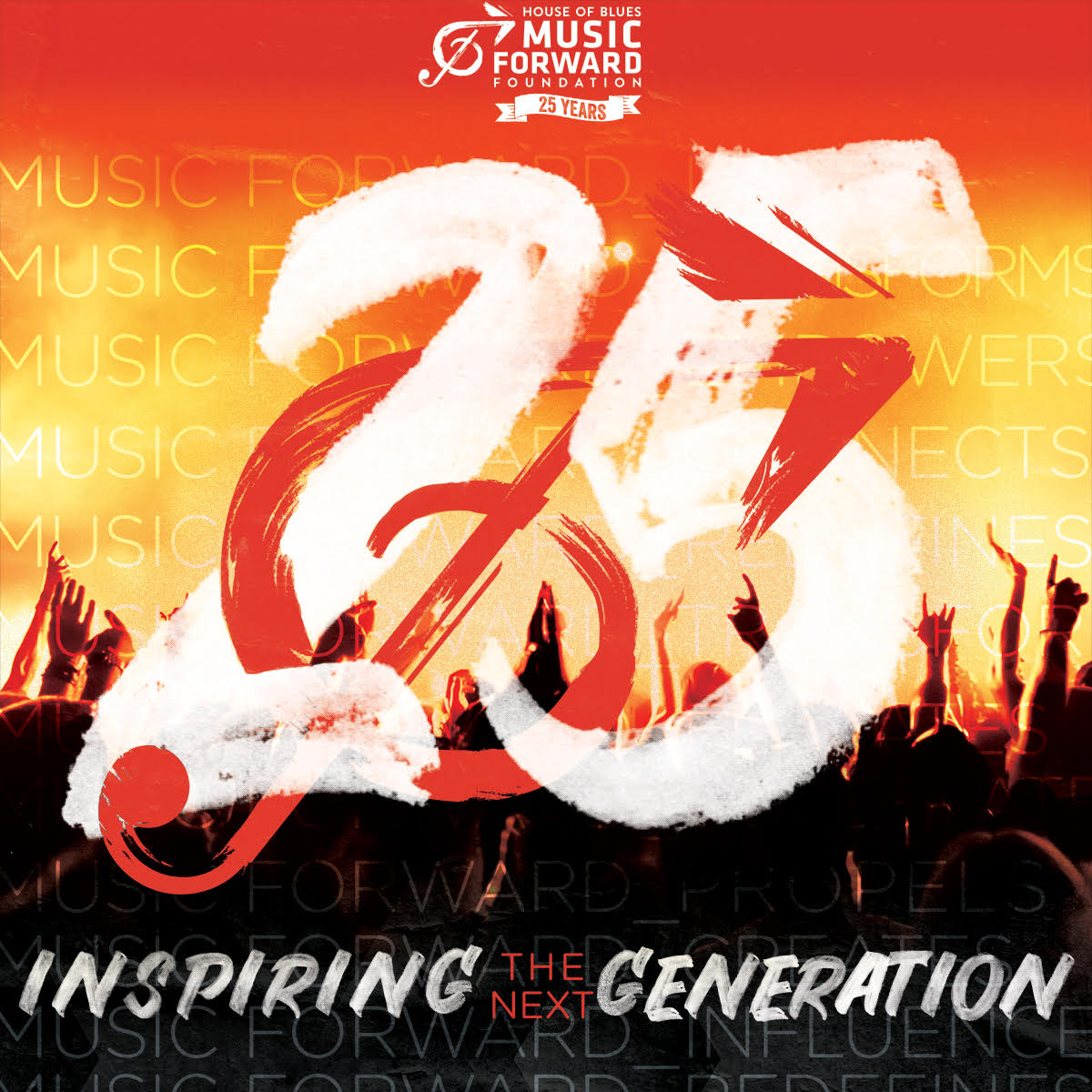 Throughout the 25th anniversary season, online activations will share the stories of 25 individuals who were shaped by and have influenced Music Forward programs throughout its history. There will also be online auctions for a chance to bid on exclusive music memorabilia and experiences, as well as celebrations and special events at House of Blues venues across the country.

Formed in 1993 by the founders of the House of Blues, they envisioned a charitable arm to the venue that would bring the arts to schools and communities through programs that promoted cultural understanding, encouraged creative expression, and manifested their core belief of Unity In Diversity. Current programs are designed to help youth hone their interests and artistry while instilling a strong foundation of knowledge, skills, and confidence that will enable them to excel – not only in the professional world of music, but in all of life’s endeavors. According to a recent outcomes’ assessment, 100% of alumni are employed or in school, and 94% regularly leverage skills and knowledge they gained from Music Forward.

Music industry professionals generously provide more than 3,000 hours of volunteer service each year, and collaborative partnerships with hundreds of schools, businesses, and other nonprofits strengthen the organization’s ability to bridge community to industry and serve youth nationwide. Music Forward is also proud to hold the Platinum GuideStar Nonprofit Profile Seal of Transparency, the highest level of recognition for organizational efficiency and transparency offered by the world’s largest source of nonprofit information

“I love being involved because I see myself in these young people—they are curious and passionate about starting a career in the music industry,” said Manuel Moran, Live Nation’s Vice President of Latin Touring and Music Forward mentor. “We have an opportunity to inspire these young people and show them the many possibilities available to them in this industry. The experience provided me with a unique sense of purpose.”

Music Forward is doing its part to address a nationwide challenge today’s youth face when it comes to education and employment. 11.7% of the nation’s 16-24-yearolds are disconnected, meaning they are not currently enrolled in school or working which can result in a variety of socio-economic difficulties throughout life. By providing fundamental resources and strategic opportunities, the organization helps youth turn their passion for music into professions and map pathways to success. Music Forward removes barriers to ensure that under-represented voices have a bridge into the music industry and the industry becomes a more accessible, diverse, and equitable place to work.

Music Forward alumna Lirio Hernandez states about her experience, “I grew up in LA and come from a low-income family… I knew that I wanted to do something in music, but I was not sure what. When I found out about Music Forward, I was really excited and interested…Music Forward solidified my dreams of going into this industry and made me more confident and determined to pursue my career.”

One of Music Forward’s biggest supporters is Live Nation Entertainment, the world’s leading live entertainment company. Live Nation provides support to the charity through House of Blues revenue streams including Foundation Room member donations, as well as restaurant and retail items designated specifically to benefit the foundation. The company provides access to its venues and professionals for young people across the country to learn first-hand about the music industry. Live Nation also provides the nonprofit with organizational infrastructure which is critical to ensure that the charity invests a majority of every dollar raised directly into programs for disadvantaged youth.

The talent that has been cultivated by Music Forward spans a diverse range of backgrounds and genres. Alumni have gone on to achieve impressive accomplishments in the industry including being signed to prominent record labels Atlantic Records (Ravyn Lenae, Class of 2015) and Tommy Boy Entertainment (Almost Awake, 2016) to performances on larger platforms including SNL musical appearances (Elliot Skinner, 2015), American Idol placements (Trevor Douglas, 2015; Zach Person, 2015; Sabrina Lentini, 2016) as well as festivals like Made In America (Red Letter Day, 2016) and Vans Warped Tour (Hoity-Toity, 2016).

Music Forward invites everyone to play a part in redefining what’s possible for the next generation of music industry leaders by growing our family of supporters. Follow the celebration across social channels @HOBMusicForward and learn more atwww.hobmusicforward.org.

Music Forward is an independent nonprofit organization that empowers youth to enter the music industry and enrich it with diverse voices, on and off stage. Focusing on young people ages 12-22 in under-represented communities, we set the stage for success by providing workshops and showcases to kick-start musical careers, and redefine what’s possible for the next generation of music industry leaders. Learn more at www.hobmusicforward.org.

About House of Blues
Founded in 1992, the 11 House of Blues are located throughout the United States and form the country’s pre-eminent group of intimate music venues.  Each features state-of-the-art sound and lighting technology in one-of-a-kind custom designed environments aimed to bring fans as close as possible to the artists.  Every location’s restaurant and bar is adorned with signature original folk-art – part of the world’s largest collection – combined with the House of Blues legendary hospitality and tantalizing cuisine.  Learn more at www.houseofblues.com.