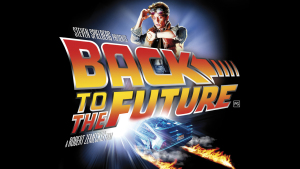 Everywhere –Great Scott!! Today is Back to the Future Day.  October 26, 1985, was the date of the first time travel experiment in the first movie but, October 21, 2015, is the future that Doc, Marty, and Jennifer travel to in the second movie. Well, the future is today!!

Back to the Future had me looking forward to a future with flying cars, hoverboards, boombox vests, and holographic movies. But screenwriter Bob Gale and director Robert Zemeckis’ idea of the future was more for entertainment value than a foreshadowing of things to come. Back to the Future Part II took a shot in the dark at what 2015 would look like and Marty McFly’s 2015 wasn’t a scary one, but a colorful, shiny world with exciting new advances that were available to everyone.  In our 2015, we may not have our flying cars or hoverboards, just yet, but we do have the Back to the Future trilogy that has entertained us and will always have us looking 30 years into the future, and as long as we don’t disrupt the space-time continuum as much as Marty, that’s all we could have asked for.

Here are a few suggestions on how to celebrate.

Ever wanted to pop open your own bottle of  Pepsi Perfect? No need to confront Griff Tannen at the Cafe 80’s to do it. Today, 6,500 lucky people will be able to order the limited-edition bottle on Pepsi’s website. You can also buy one for more than $200 on eBay from somebody who received one at New York Comic Con.

You can also have front row seats to a Back to the Future Marathon. All this month, Amazon Prime members will be able to stream all three “Back to the Future” movies for free. Unfortunately it won’t be in Hologram form like Jaws19, but if you want a higher resolution experience, Universal recently released a 30th anniversary Blu-ray set.

If video games are more your style. This month was also the release of a special”Jetpack Joyride” theme allowing  players to play with a special “Back to the Future” theme for free. Next month, it will cost $9.99, so get to it fast —unless you have some kind of time machine that lets you travel into the past.

I know, we have all been waiting for the hoverboard for 30 years and when Hendo and Lexus hoverboards went viral this year, we were all ready to hop in our flying DeLorean and rush out to buy our own. Sadly the Lexus Hovervoard isn’t available for purchase, but you can purchase a tiny replica ($29.99) that actually, sort of,  hovers in the air.