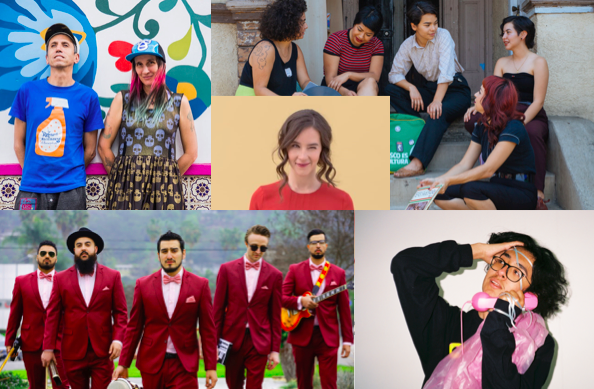 Celebrating their 20th anniversary, LA’s vallenato veteranos Very Be Carefulare sure to get your dance grooves going, to the rhythm of their accordions and cowbells rattling your ear drums! This savvy quintet of skilled musicians from the Eastside, formed in the late 1990s, are best known for their frantically danceable traditional vallenato music, based on their Colombian roots.

Local favorites Chulita Vinyl Club self-identify as womxn of color in the context of providing a space for empowerment and togetherness. They stand united as a female DJ collective spanning 7 national chapters and bringing community together through the love of vinyl and chicano soul.

tour, politically provocative surf rockers Aterciopelados will celebrate over 20 years of hits, including “Florecita Rockera”, “Baracunatana”, “Bolero Falaz”, “Caribe Atómico” and “El Estuche”; as well as the release of their latest live DVD.

Everyone’s favorite heartthrob CUCO, will showcase many of his dreamy melodies, such a his anthemic song ”Lo Que Siento”.  “Cuco’s rise suggests that our modern heartthrobs won’t be suave or cynical. Rather than appearing larger than life, they might revel in their realism, a quality that inspires rather than isolates fans.” – LA Weekly

Ximena Sariñana will bring her girl power to this celebration, promising to deliver a glimpse from her upcoming album, as well as unforgettable songs like “ Parar a Tiempo”,“Mediocre” and “No Todo Lo Puedes Dar”.

La Chamba’s unique sound, fusing psychedelic electric guitars and organs with heavy Afro-Latin rhythms (such as cumbia, salsa and rumba) are sure to get your feet moving!

The 18th Edition of the Country’s

Largest Day of the Dead Celebration

Will Take Place in Los Angeles