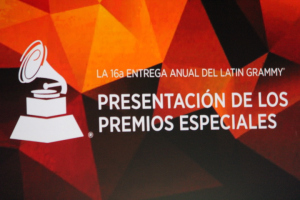 The magical morning got underway with    honorees arriving early and posing for photos and answering questions for the press before the ceremony.

I caught up with Rafael Ithier, pianist and band leader of El Gran Combo de Puerto Rico, which he launched in 1962, to get his take on being one of this year’s Lifetime Achievement Awards recipients.

“I feel very happy, I am humbly excepting this award in the name of all my fellow band members and Puerto Rico, which is the island that seen our birth and that I love. I would like to say thank you because us artists need this type of stimulation in order to continue with our work,” eloquently expressed Ithier. “I am grateful this recognition and award is being given to me [our group] while we are still alive, since many of these awards are sometimes awarded posthumous, there are many artists and groups that deserve this, so I share this with all of them too, and with all present and ex-band members, and the rest of our group which is currently on tour in Columbia.”

From the red carpet arrivals, we made our way into the KA theater as the ceremony was set to start.

“For the record we are starting the ceremony on time. I was not responsible for asking you to arrive three hours early so we can achieve this,” humorously explained Gabriel Abaroa, President/CEO, The Latin Recording Academy. “Up to now we have had 96 honorees of Latin music receive these prestigious awards, and today will honor 10 more living legends, seven with The Latin Recording Academy Lifetime Achievement Award, and three with [TLRA’s] Trustee Awards. I would like to thank all our honorees, the entire Latin Recording Academy, and The Board of Trustees who are all present with us today. I would like to also thank all of you who are here this morning, including the press, and all [of you] who have worked tireless all year so these prestigious awards can take place.”

“Born in the Dominican Republic, Angela Carrasco, daughter of renowned musician and guitarist Blas Carrasco, has had a career spanning more than 30 years. Carrasco first enjoyed success in Spain for her portrayal as Mary Magdalene in the Spanish adaptation of Jesus Christ Superstar. In the late ’70s she gained recognition across Latin America, United States and Europe with such hits as “Cariño Mio” (“Love Of Mine”) and “Quererte A Ti” (“Loving You”). Throughout her career, Carrasco has recorded more than 15 albums, immersing herself in the Latin pop, ranchera and Afro-Caribbean genres, and received numerous music awards,” explained a retrospective video of the recipients life before being honored.

“Upon being notified that you will be honored, you think that when the time comes you will be like those great artists who have been honored before, composed and in control of your emotions, but my whole body is shaking. Seeing and remembering my entire life flashback as I watched the video I now realize that something special happened. I would like to thank the academy for thinking about me, and especially all those who really deserve this, who through the years continue to support, buy your music, and go see you live which are the fans. I would also like dedicate this honor to all of those who help me through the years, the many composer who wrote songs for me, there’s one special composer I would like for you to give a hand to who is well deserving and who was instrumental in my success and that is Camilo Sesto [please clap]. I would like to dedicate this award to my parents, to my children, and especially to my wonderful husband who allowed me to be myself and be on the stage,” humbly expressed Carrasco. “I think and wonder why me, why honor me with this award, when I am [and was]  just doing what I love. So I share this award with all of you, thank you.”

“This is a big surprise, because I had not seen neither Johnny or Victor, both my dearest friends and colleagues who i love very much and who also represent our genre and through their dedication and achievements have also elevated it. I would like to thank the academy for this great honor, thank you, thank you, thank you, for thinking of Rafael Ithier and El Gran Combo de Puerto Rico. I would like to accept this great honor on behalf of founding and current members of El Gran Combo who are no longer with us, who are entitled to this great award just as I am,” eloquently expressed Ithier with his raspy deep voice. “I never really considered myself a musician, I like to think of myself as a great organizer since I am very disciplined. I am 90 years old, but I have asked God to let me live at least till I am 120 years old, so that means there are still about 20 to 25 good years left. The feeling of being honored with this award will help me reach that age, and acts as a motivator to continue to create and write great music and represent this award from here on as I always have done with respect and dignity.”

The ceremony ended in a surprise and in style when singer Celine Dion, joined Neil Portnow, President/CEO of The Recording Academy in presenting The Latin Recording Academy’s Trustee Award to music producer and renown recording engineer Humberto Gatica [of Chile].

“Humberto, I want to tell you today that I am extremely thankful for the moments you have captured that made me the singer I am today. There been many moments that we’ve had, fun times that were easy, and many moments that weren’t, and the moments that were the toughest, it sounds strange, but these are the moments I remember the most because you made it work. I love you very much, you made a big difference in my life, conquering the business that is all I remember. You are part of me, thank you for singing with me. I better stop now before I get very emotional,” expressed Dion before a retrospective video of Gatica was shown and she called him up on stage to personally hand him the 2015 [TLRA’s] Trustee Award.

Celebs at Chill opening: A Kingdom of Ice at the Queen Mary in Long Beach