Plus Songs By Kim Wilde, Bonnie Tyler, Air Supply, and Mental As Anything

The Strangers: Prey At Night is a reboot of Bryan Bertino’s 2008 cult classic The Strangers.  The movie stars Christina Hendricks, Martin Henderson and Bailee Madison.  A road trip to visit relatives takes a dangerous turn when a family arrives at a secluded mobile home park that’s mysteriously deserted — until three masked psychopaths show up.
“I had an idea that once we reach Gatlin Lake, just as the strangers are tuning into radio pop from yesteryear, so too should the scoring sensibilities get occasionally dialed across the decades,” said composer Johnston. “I also wanted to treat it as much as possible as a live event, but also incorporating certain ‘musique concrete’ techniques, reverse tape, loops, cut ups etc.” 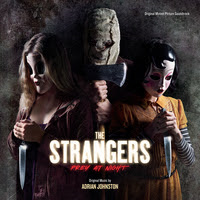 Adrian Johnston’s film career began after he became known for live multi-instrumental performances of his new scores for classic silent movies across Europe and USA. His first feature commission was Jude in 1996. Other film credits include Becoming Jane and Kinky Boots.
Johnston thought out of the box in recording the music for THE STRANGERS: PREY AT NIGHT.  “The recording sessions took place at night in an incredibly atmospheric (deconsecrated) chapel, centuries old,” he described.  “I projected the film onto a 30-foot high paper screen and improvised to picture, mixing acoustic instruments, vintage synths and organs. There were no nearby neighbors to disturb so I was able to get the entire building thrumming with the cacophony.”
In addition to Johnston’s score, the soundtrack features classic tracks by Kim Wilde, Bonnie Tyler, and Air Supply.
Tracklist
1. Kids in America — Performed by Kim Wilde
2. The Strangers Prey At Night
3. Gatlin Lake Getaway Welcomes You!
4. Is Tamara Home?
5. Is Somebody There?
6. Live It Up — Performed by Mental As Anything
7. Bathroom Assault
8. Under Siege
9. On The Run
10. But We’ve Just Started
11. Cambodia — Performed by Kim Wilde
12. Hunted
13. Remember That Time?
14. Call 911
15. Total Eclipse of The Heart — Performed by Bonnie Tyler
16. Pulled To Safety
17. The Sheriff
18. Inferno
19. Making Love Out Of Nothing At All — Performed by Air Supply
20. The Bridge
21. Deliverance
22. End Titles
23. Bonus Track
Varèse Sarabande will release THE STRANGERS: Prey at Night – Original Motion Picture Soundtrack digitally on March 23 and on CD April 13, 2018.
www.varesesarabande.com