Chuck Dennis and his staff put on the 2nd Annual Oxnard Jazz Festival on September 9th at the Oxnard Beach State Park.  Geoff Gil, radio personality and co-owner of Dwell Real Estate, was one of the fabulous emcees for the day along with the always lovely, Pat Prescott from 94.7 The Wave…

What a fabulous day! It was a gorgeous venue with the sea breezes blowing off the ocean, a very warm and welcoming staff, easy access for taking photos and interacting with the musicians performing. I had one of the best times covering a jazz event…

The day began with the Oxnard High School Jazz Band that performed a repertoire of wonderful classic songs that showed off their talent. Next, there was a hot, driving performance with the Ashford Gordon Blues Band.  We heard some down home blues that rocked the house. 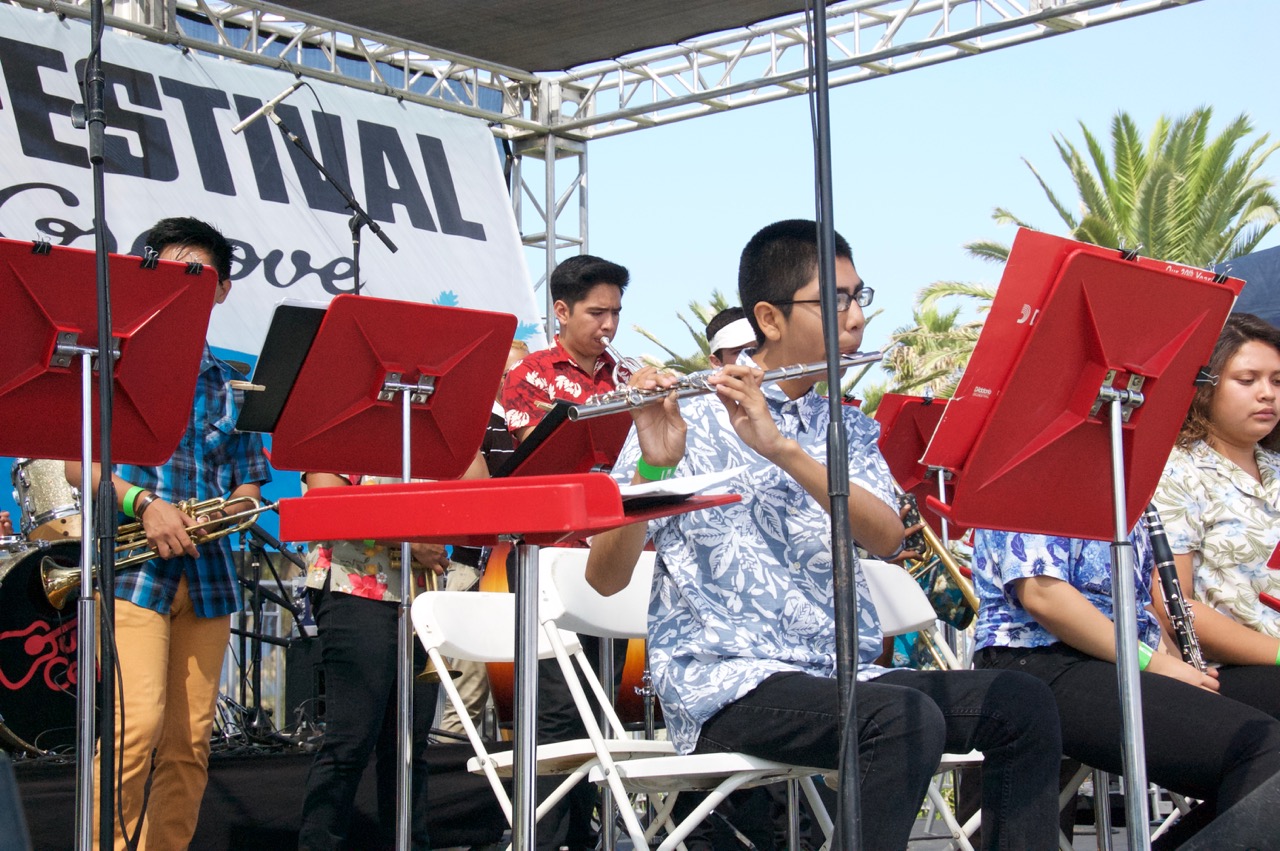 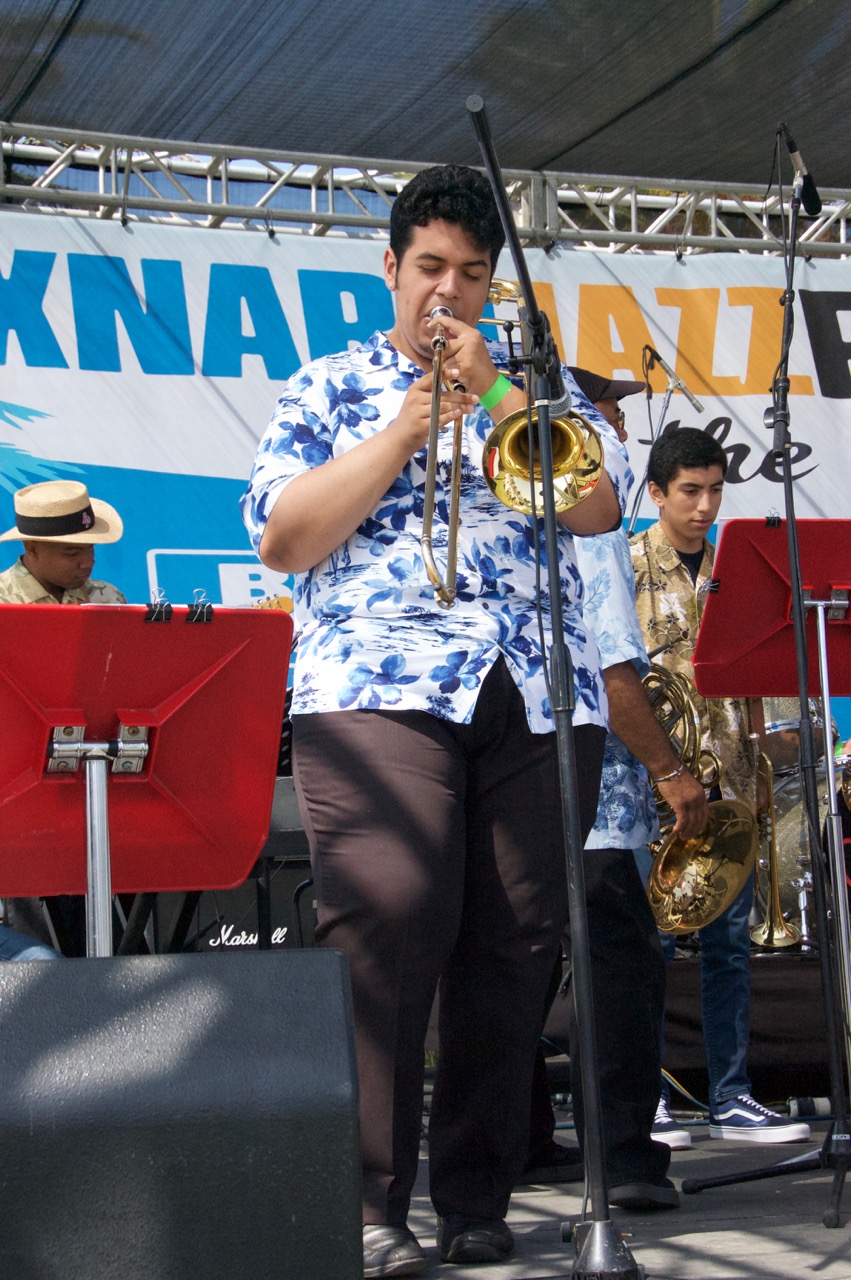 Travelling all the way from Philadelphia, David P Stevens,tore it up on the guitar strings being backed up by Rick Parma and his band.  Stevens’s hot licks on the guitar zapped the audience with soulful and sweltering music that seems to be the product of that area of the country. Be on the lookout for his CD, “Love City,” which resonates with David P. Steven’s colorful guitar playing.

There was one person who worked very hard that day and was a powerful constant presence on the stage.   Rick Parma and his band backed David P Stevens, Adam Hawley, Jessy J and then Rick did his own set that smoked the house!!! He was bustling with super charged energy.  Rick roasted the air waves with his top notch soulful sax playing, he tore it up on the vocals as well.  How much fun is it to watch Rick Parma perform? A lot! Rick enjoys entertaining the crowd with soaring riffs and bringing home the belly down funk. Zipping around the crowd with his axe, Parma looked like the sax Pied Piper who the jazz fans would follow anywhere. His band was grilling it too on their instruments. Although I thought they all looked like teenagers, (LOL) each one is a veteran player. 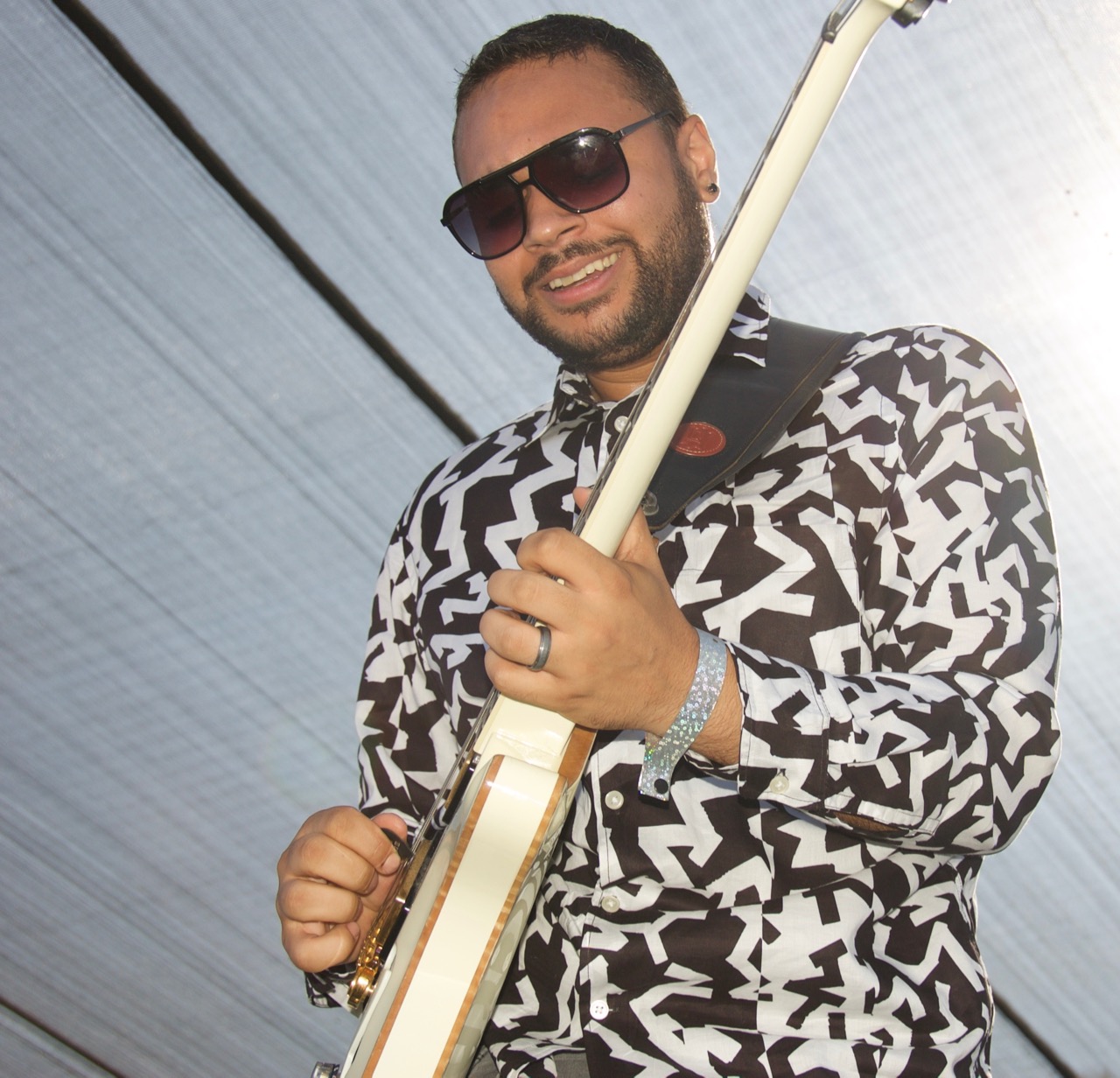 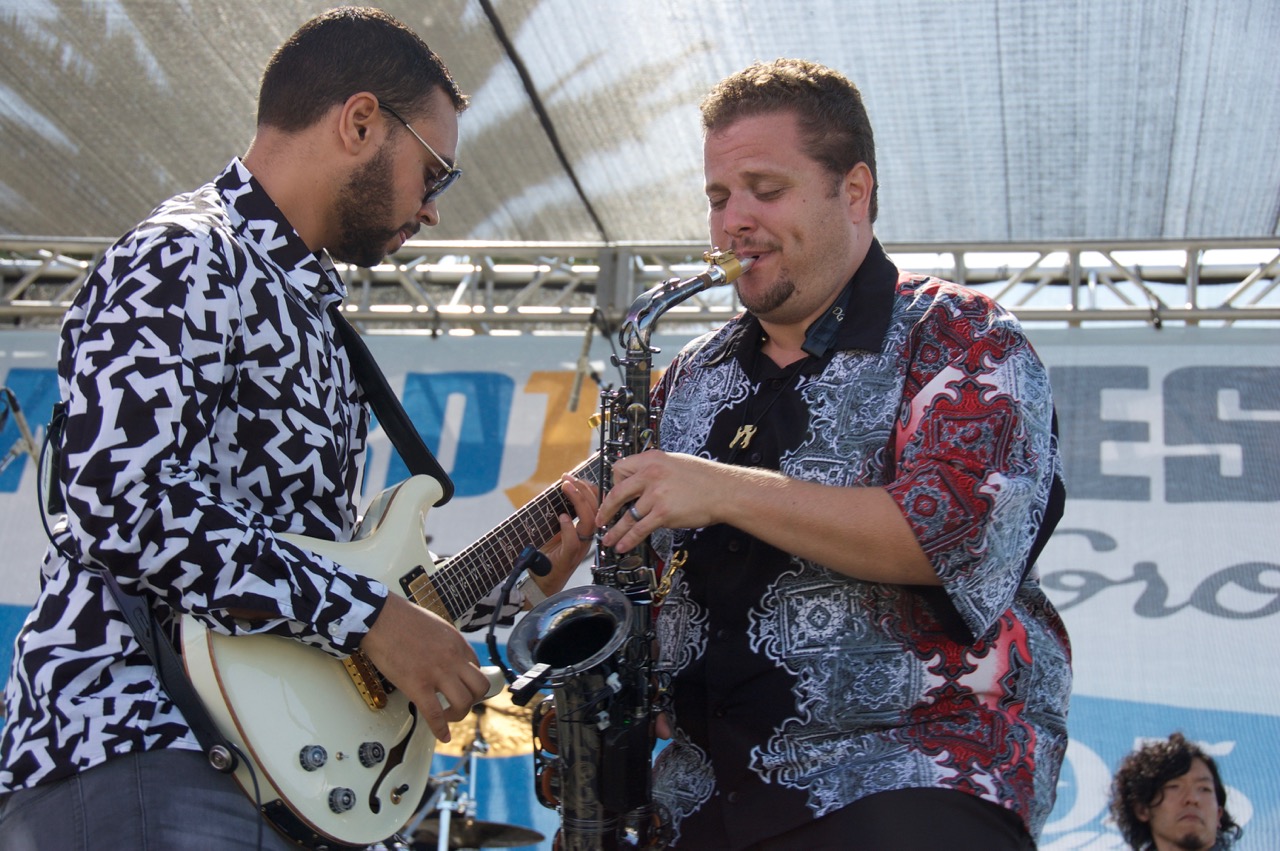 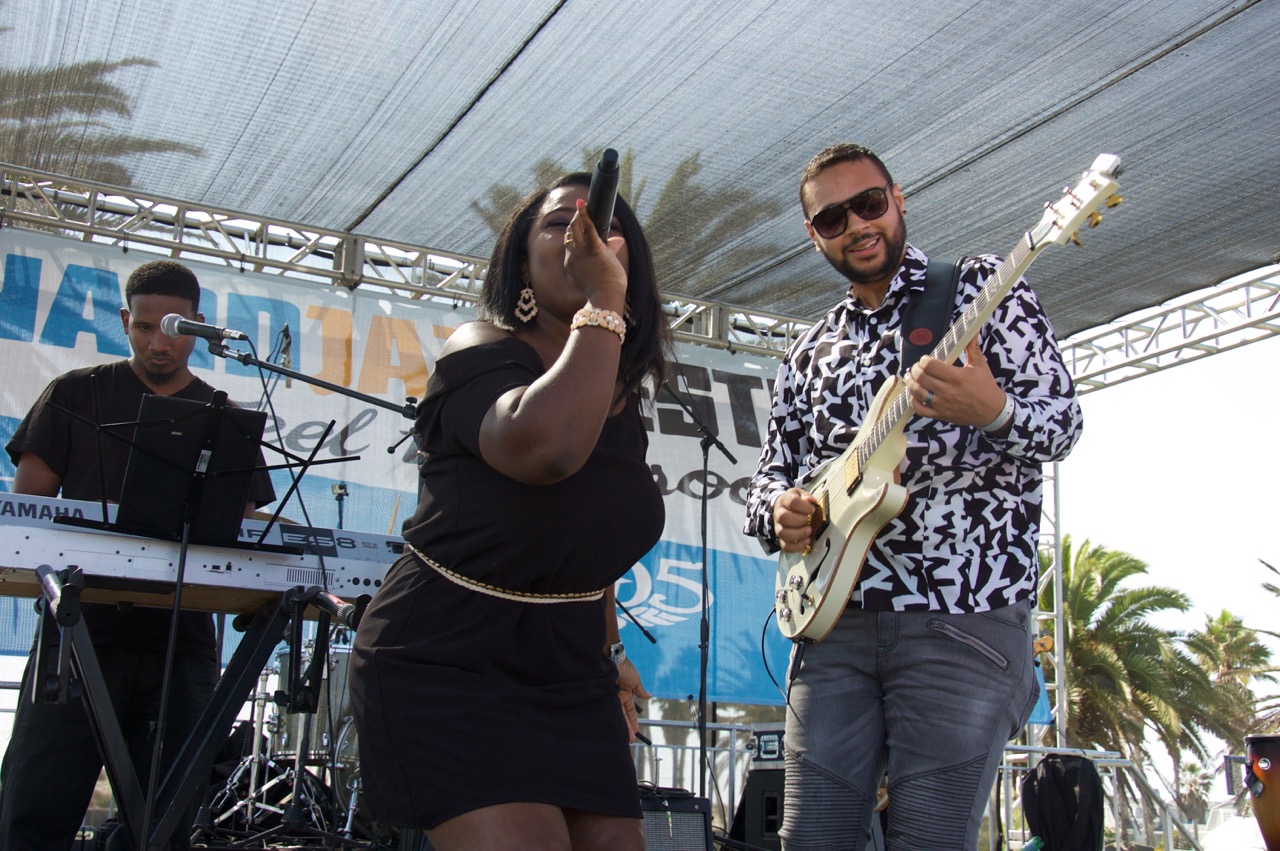 Adam Hawley cut loose during his set.  He has been touring non-stop through out the country during the summer and will be performing at Spaghettini on September 22nd.  From the moment he hit the stage,  Adam was running hard with top notch energy and masterful finger picking. Rick Parma added his razzle dazzle horn blowing and Kat Finley-Hawley spiced up the air waves with her sassy singing. 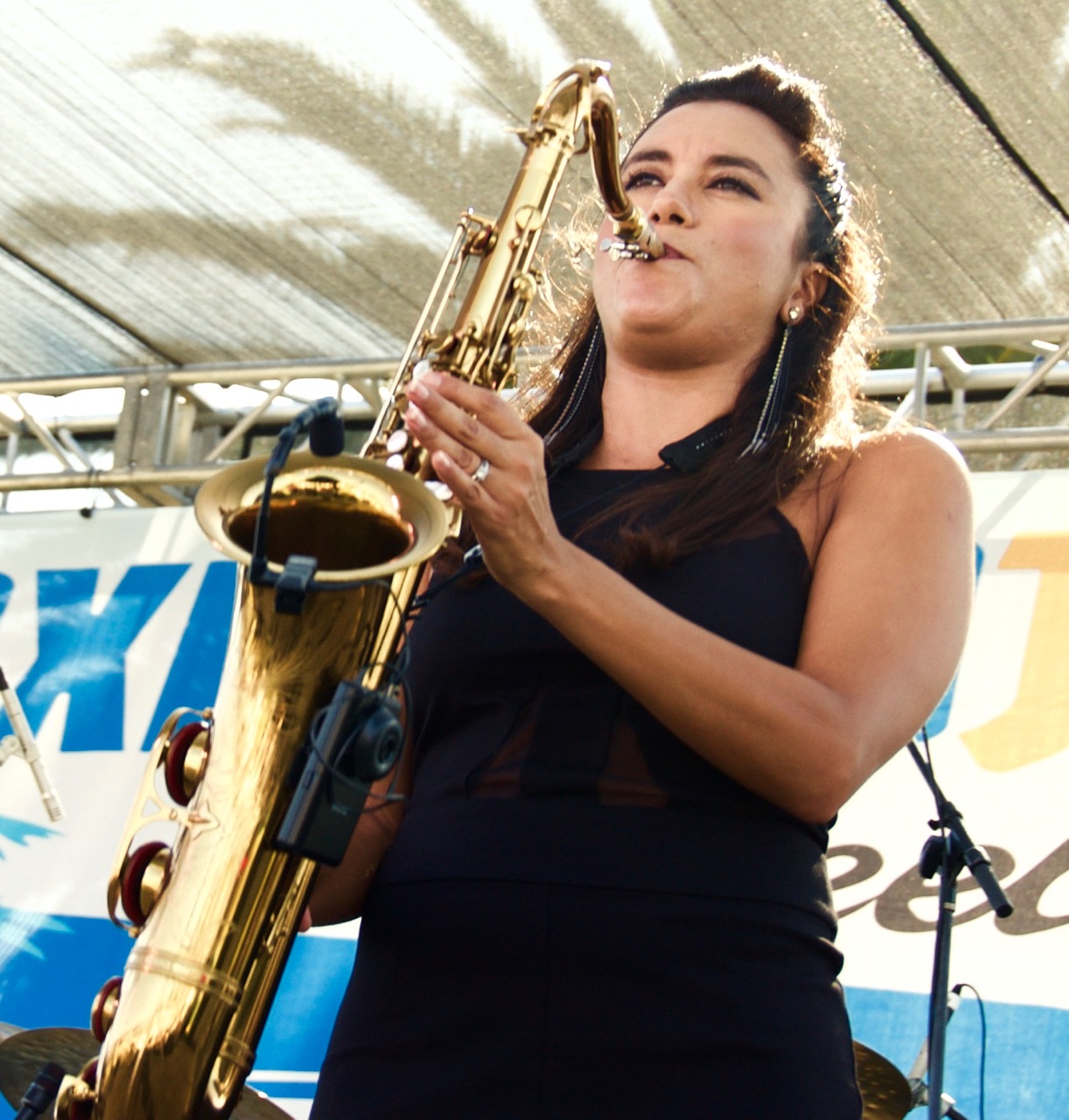 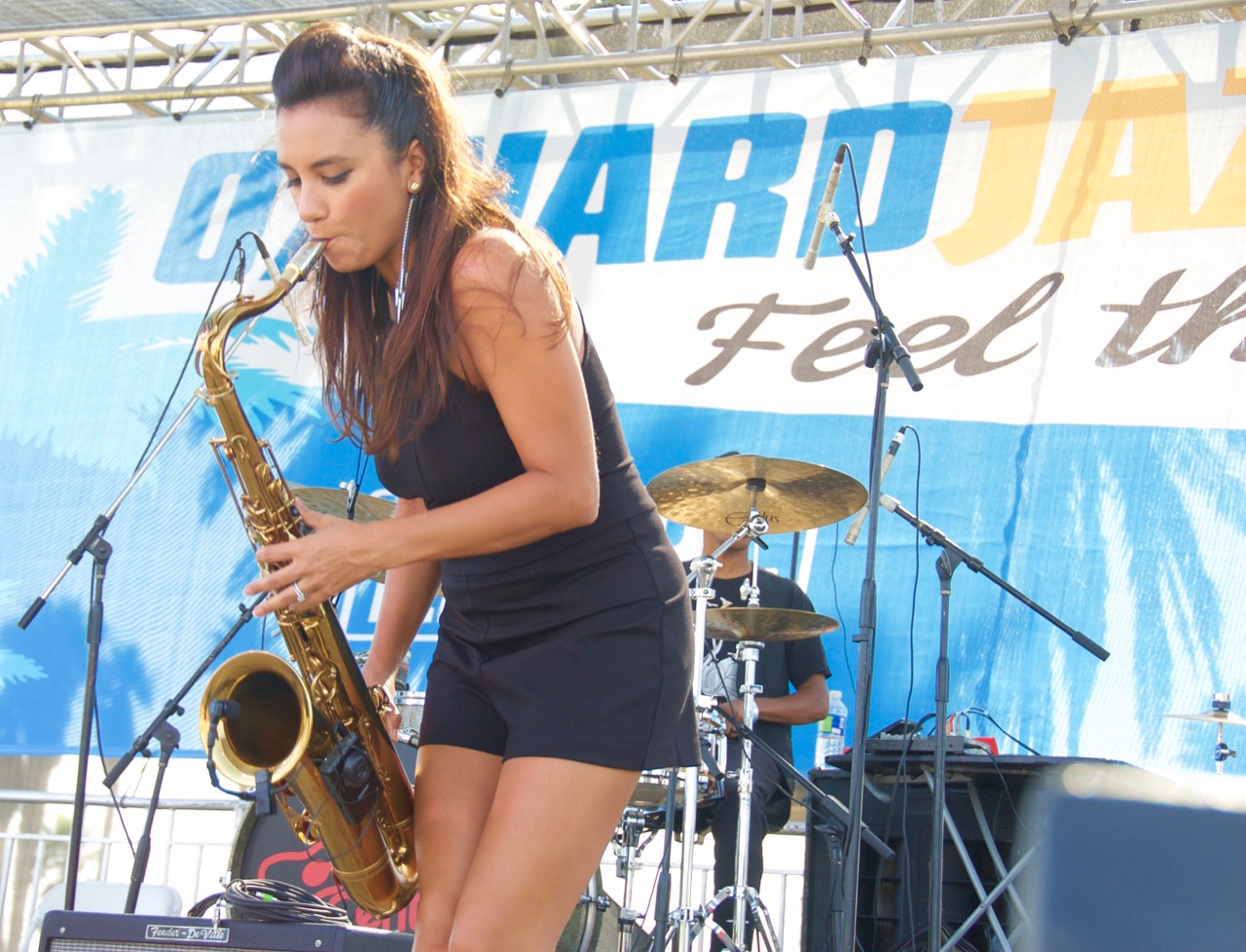 There were two women performers at 2nd Annual Oxnard Jazz Festival , Jessy J and Evelyn Champagne King who took hold of the stage and mesmerized the crowd. Jessy J blew on her sax with fluidity and savvy licks. When she presented her original melodies with the Latin feel, the audience took a rhythmic ride with her.  Always dressed to the nines, Jessy J. not only looked stylish, she designed a serious set of music. 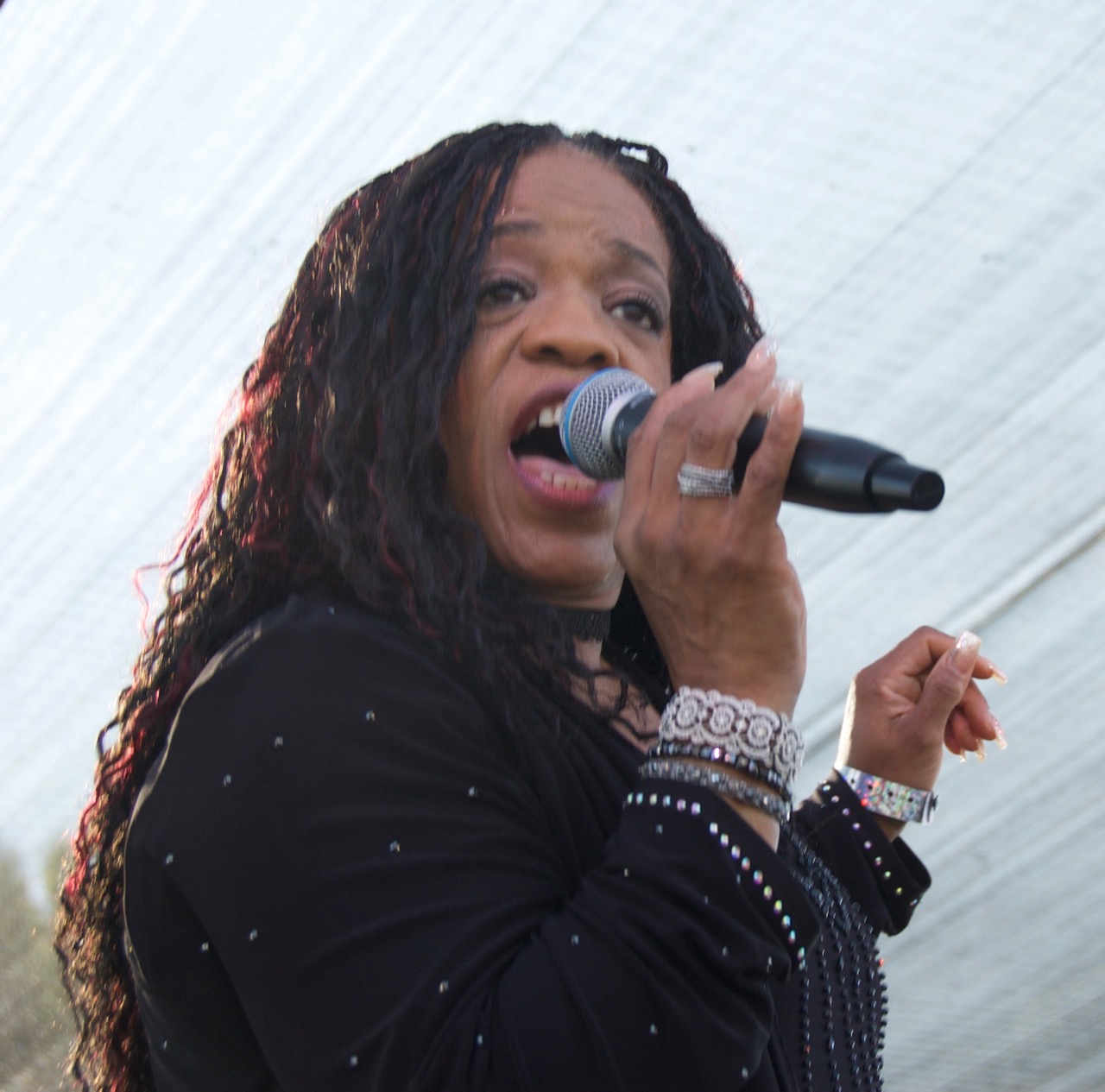 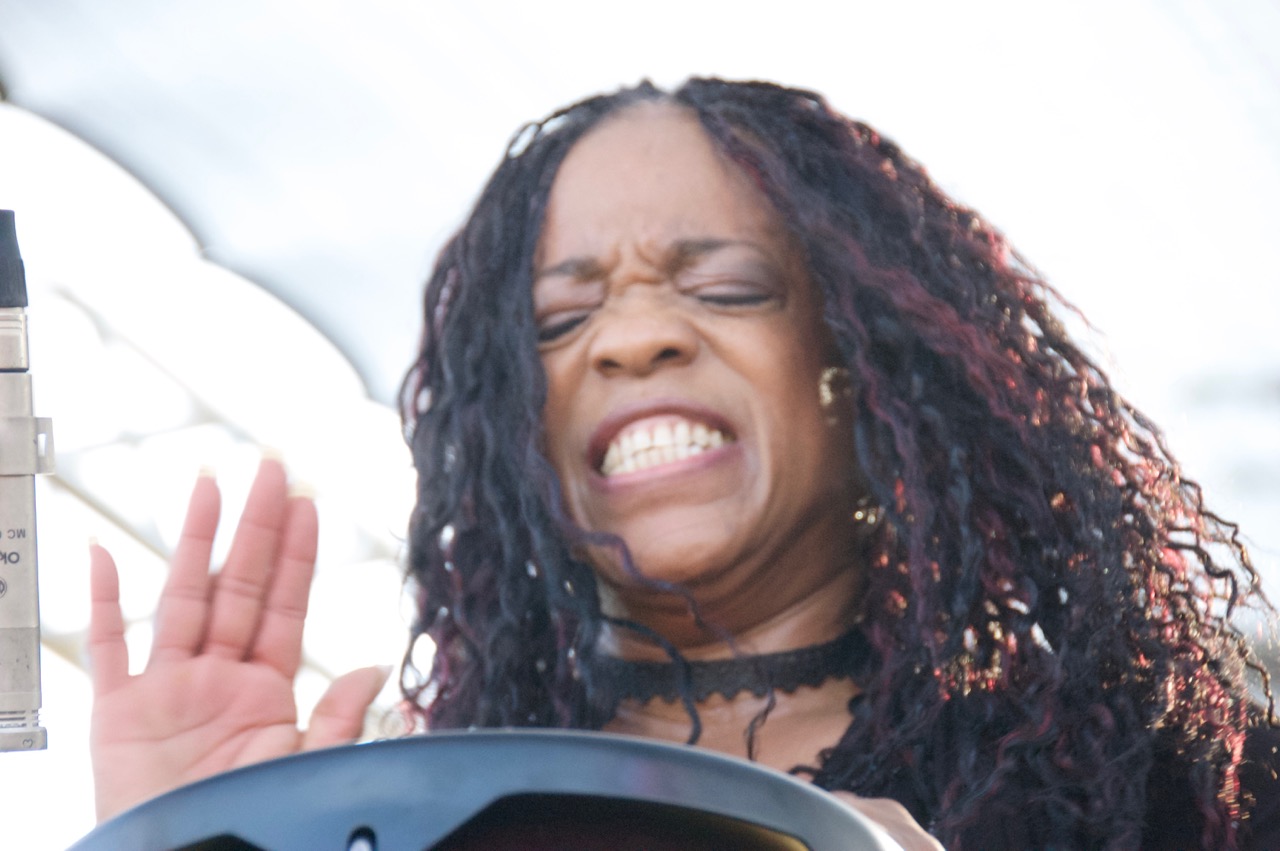 Evelyn Champagne King bounced around with abundant funk which inflamed the crowd’s excitement. She was so classy, so energetic, so sexy, so soulful, so iconic! She strutted her stuff with complete abandon. The crowd went crazy!!!  She and her husband, Freddie Fox delivered a delightful duet. This couple are two legends on their own, so together they made a colossal impact. 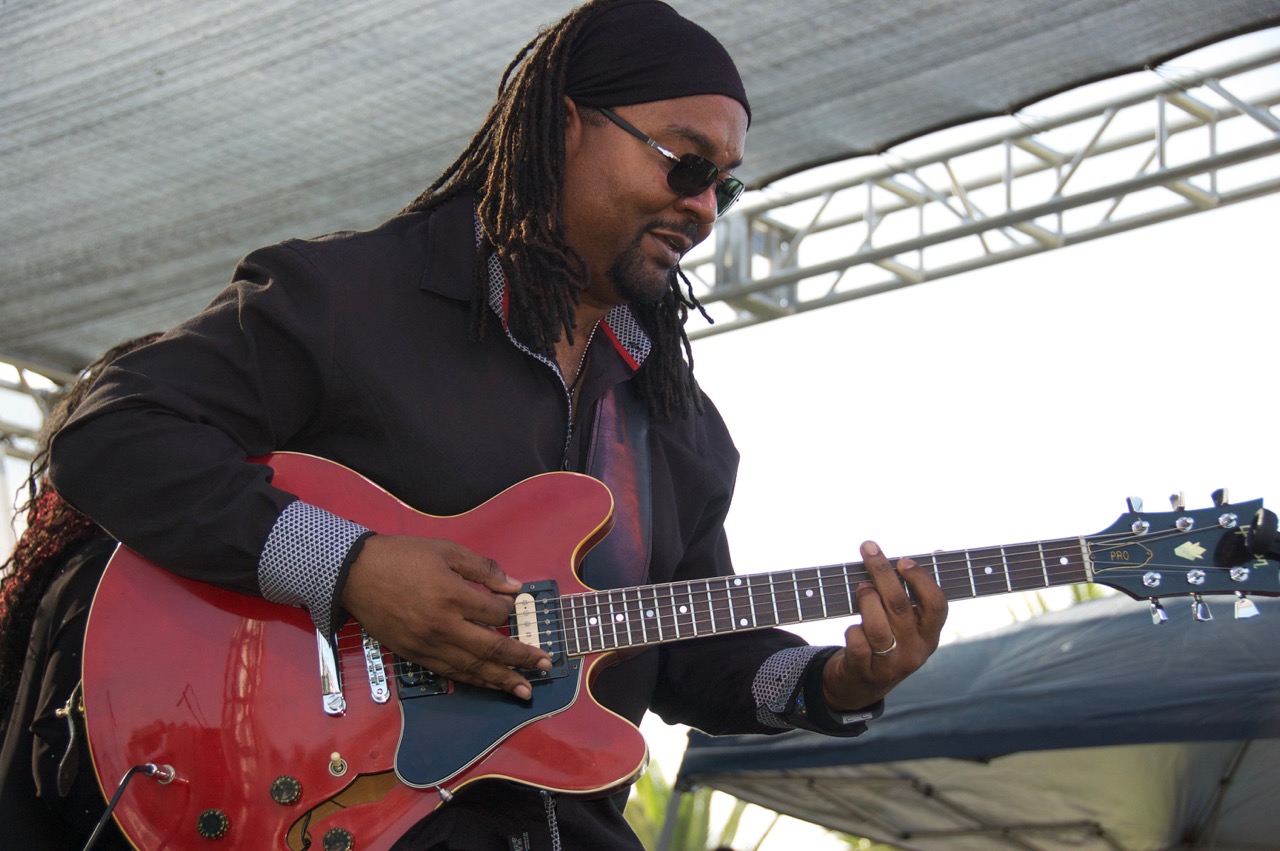 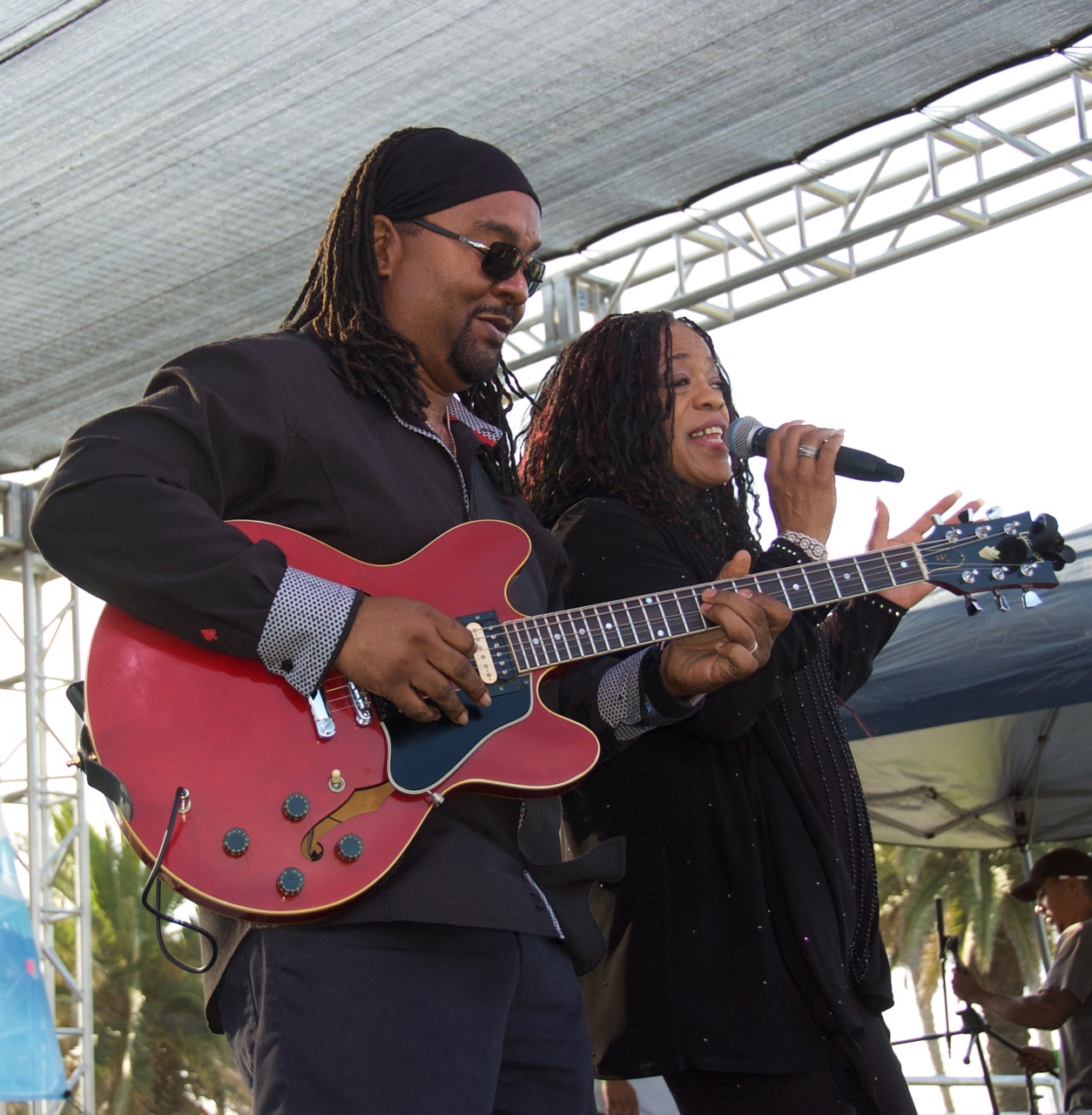 Freddie Fox ripped it up on the guitar as they performed together. The love between these two was evident as they stood side by side performing. It was refreshing to see such love and support of two well-known artists who in their own right are very famous on their own. I was blessed that afternoon because Freddie took me over to his wife for an interview when I went up to him and asked if it was possible. He was so kind and generous. Evelyn Champagne King was just so beautiful inside and out. She has totally dedicated herself to the fans and talked about how she wants to give so much positive energy when performing. 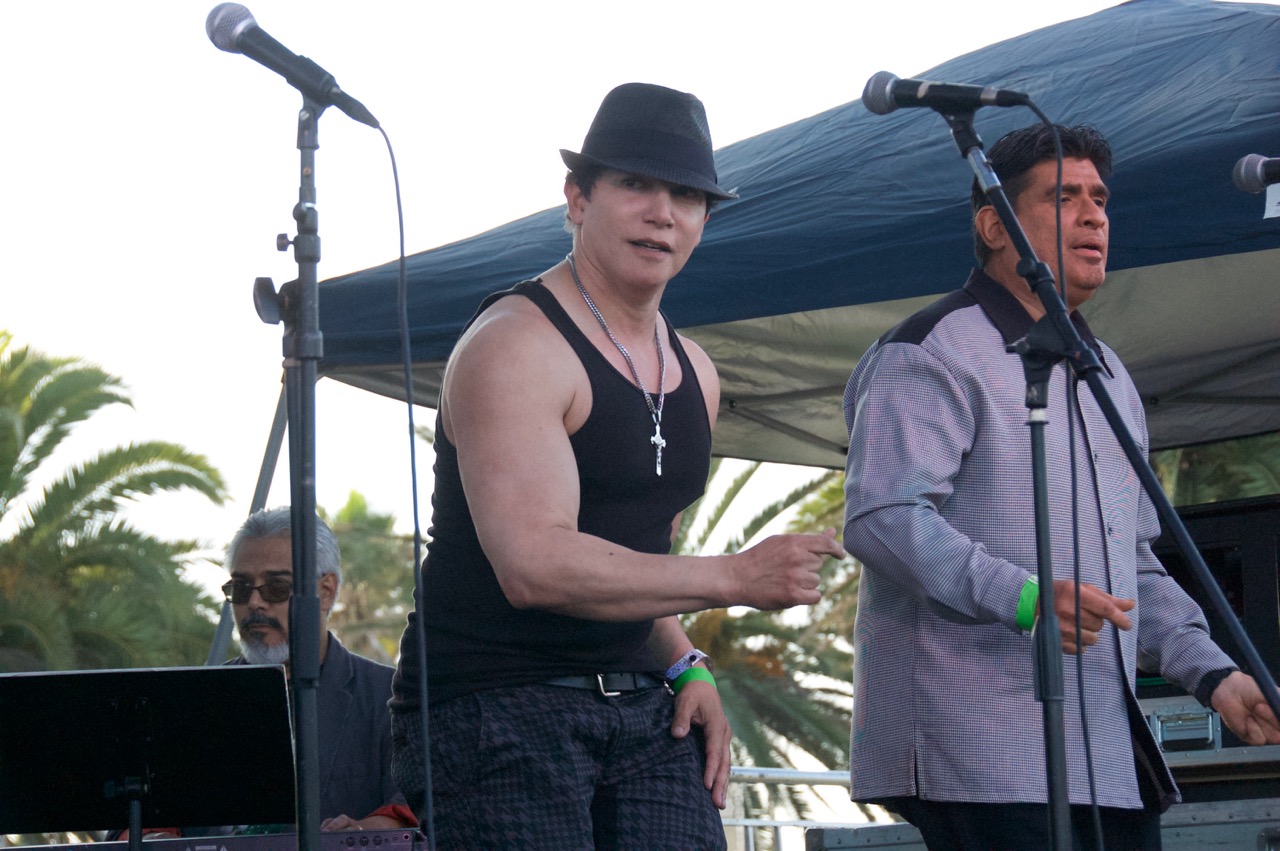 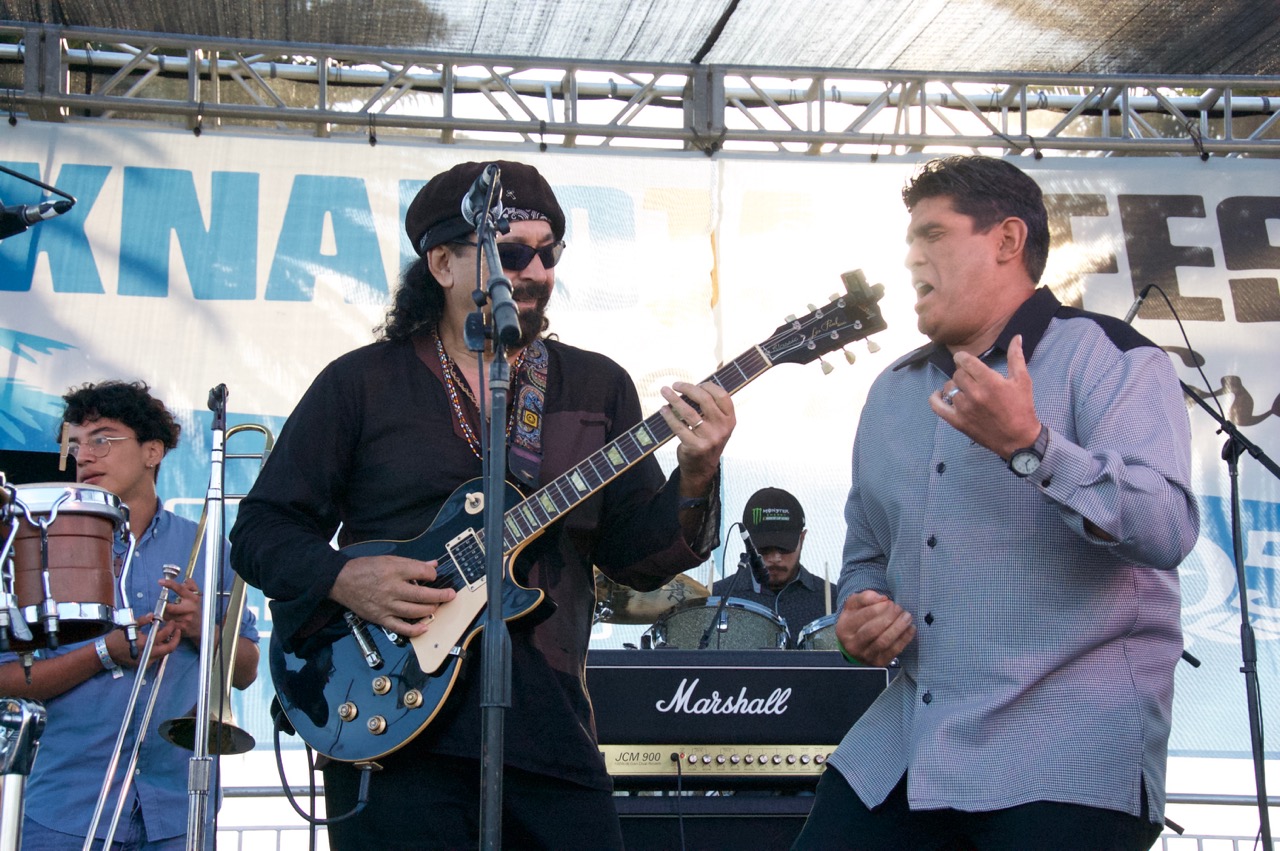 Malo, a Latin/Rock/Jazz group singed the air waves with the horns, percussion, and riveting guitar, bass, and vocals. The entire set was non-stop body shaking Latin music. They performed the legendary song, “Suavecito,” (meaning “soft” or “smooth” in Spanish) which was written by timbales player Richard Bean, who initially wrote it as a poem for a girl in his high school algebra class. We all knew the words and sang along. 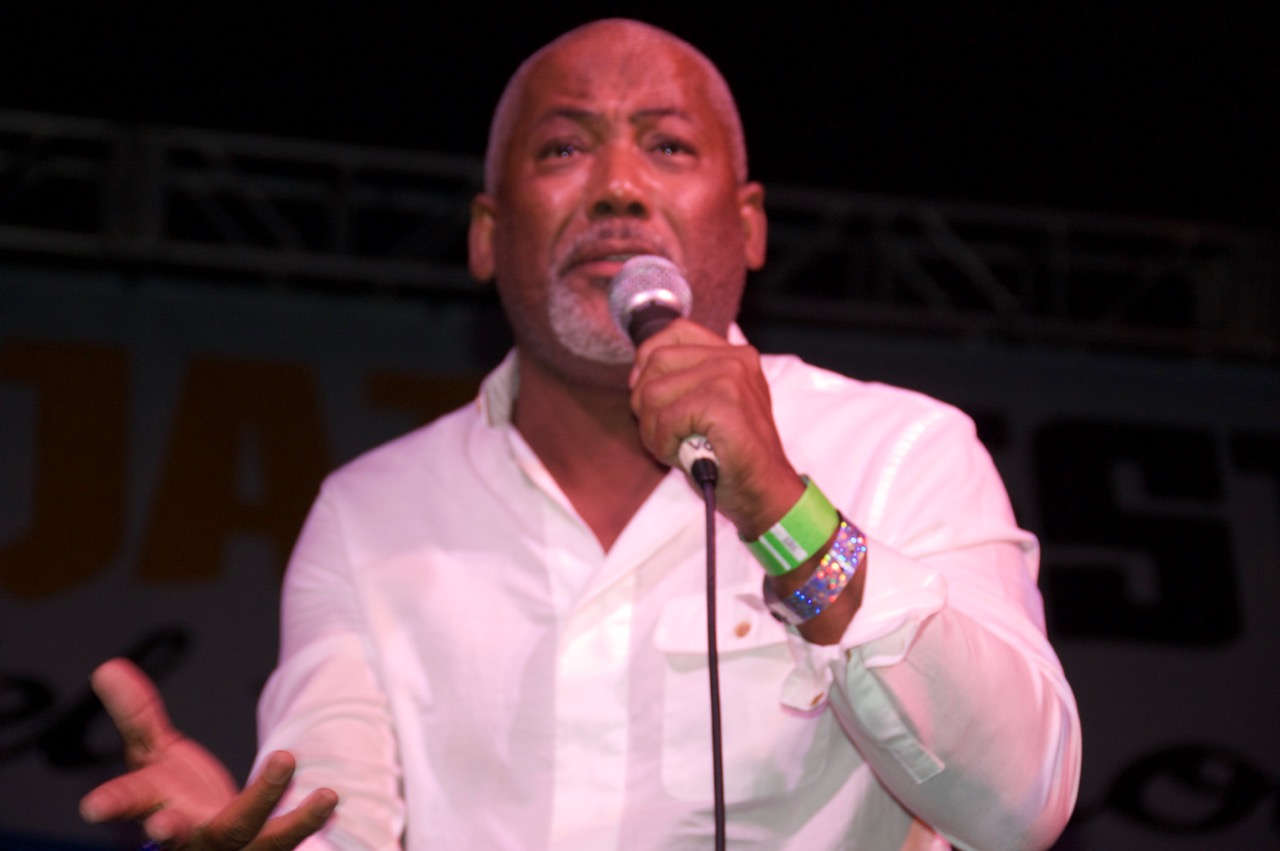 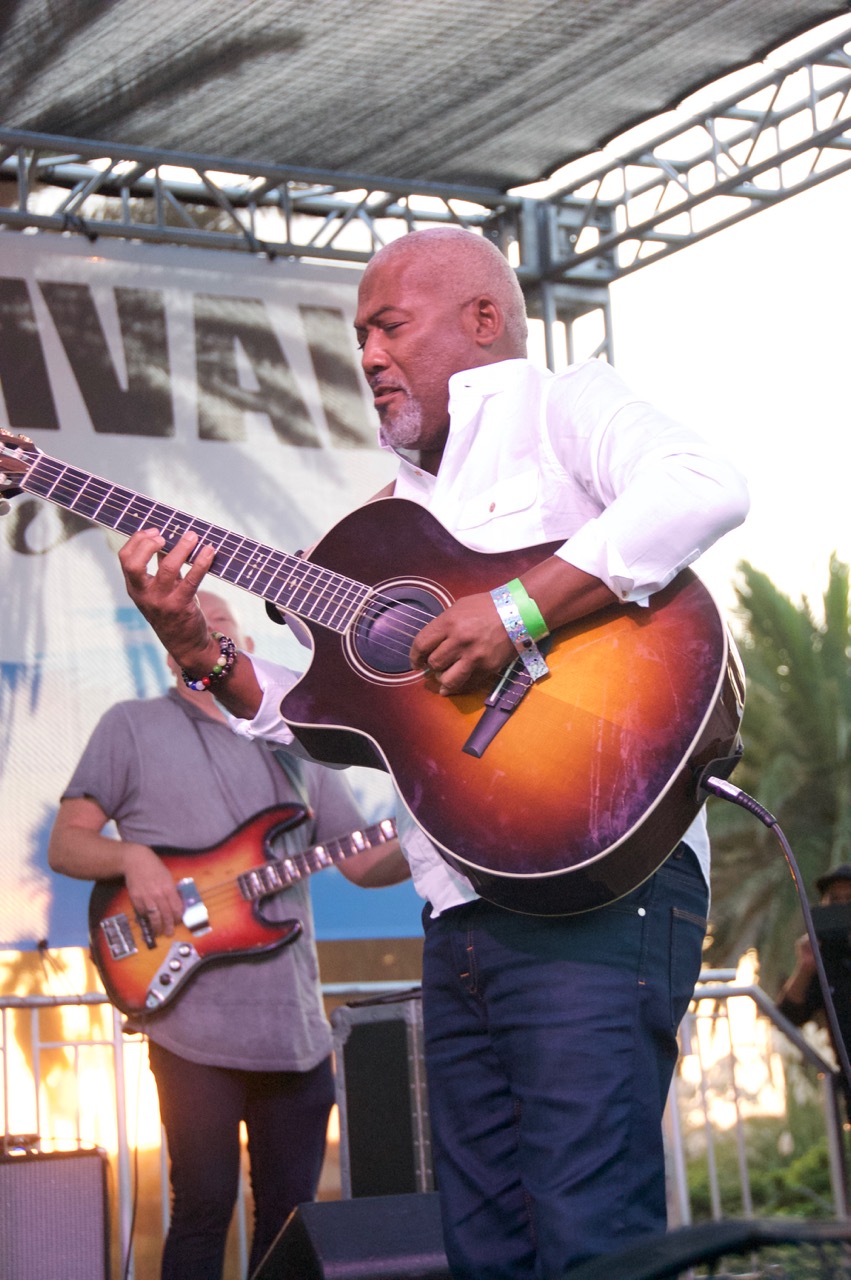 The 2nd Annual Oxnard Jazz Festival ended the day’s celebration with smooth jazz giants, Gerald Albright and Jonathan Butler.  What a fabulous climatic finale because this was the last stop on their summer tour. The two came out like roaring lions on their instruments, playing so strongly as if this was their first performance. It was totally thrilling to be up close and watch these two brilliant men give their all.  No one runs riffs as tightly and profoundly on the sax as Gerald Albright. Add some downtown funk and soul to that horn blowing and the unique reverb of his sound creates wonderful music. Jonathan Butler dug deep into his South African roots to bellow out such romantic, soulful songs that he intermixed a bit with his native tongue. He was truly mesmerizing to watch. Of course, he brought some church to the music and sang from his heart and soul about Jesus. The audience rocked and rolled with inspiration. As the sun set gloriously in the western sky over the Pacific, the Oxnard Jazz Festival ebbed to a supreme closing.