American High sings about the issues that the newspapers and journalists used to cover.

Today, in the absense of such mundane platforms, people have to rely on musicians and performers to bring awareness to injustices that plague the common man.

The new album, U.N. Article 14 by Sacramento punkers American High serves that purpose only with a good beat. Influenced by 1960s-era garage music runs the range from surf style to straight ahead rock, but elevates and enlightens. American High has put together a truly one of a kind recording with U.N. Article 14.

“We think songs are more interesting when they can be seen in different ways,” the band says. “We shun the tired INTRO-CHORUS-INTRO-CHORUS-LEAD-CHORUS-EXIT blueprint. We prefer freeform songs. We tried to make each song completely unique. With a totally different sound for each.”

They sum up their music as: “Weird chords with weird changes, weird blueprints, weird harmonies and backwards leads.  Happy singers singing dark songs of love lost, the costs of constant war, and a scream into the night. WAKE UP! Every dime this record generates goes to the SFBFS. Feed the hungry, shelter the vulnerable, teach those yearning to learn.”

Check out the album via CDBaby.

The lead video which got a lot of notice is for the ska-style track “Cheye Calvo” video, which recently won the PureM Music Awards for Best US Music Video. The song is also in rotation on BBC6. Watch at Youtube.

We’re not sure why these great musicians keep their identities undisclosed — perhaps for their own safety — but regardless this is music worth a second and a third play. Band members are: D.T.(rhythm guitar), E.S.(lead guitar), F.M. (Bass), T.M. (drums).

Production: American High produced the record. The album was recorded and mixed by Joe Johnson of Pus Cavern Studios in Sacramento. 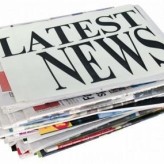